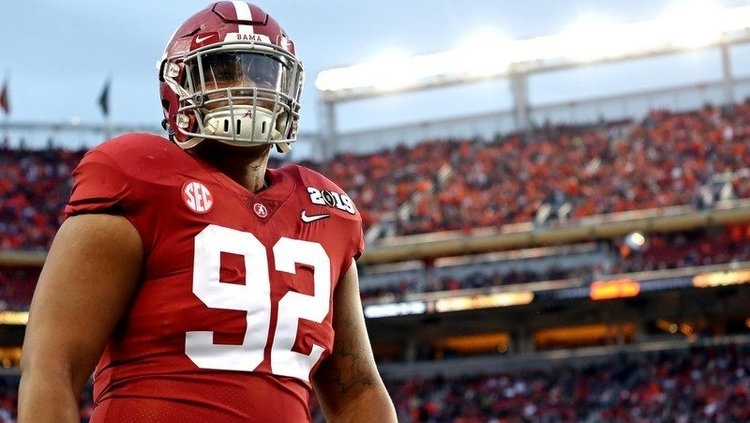 Alabama's Quinnen Williams has a strong opinion of Clemson's offense

SANTA CLARA, CA – Trevor Lawrence, Justyn Ross, Tee Higgins, and the Clemson offense handed Alabama its worst loss in nearly 20 years, but according to a couple of Crimson Tide defenders, the Tigers’ offense is nothing special.

Clemson’s offense racked up 482 yards in just 63 plays. Lawrence completed 20-of-32 passes for 347 yards and three touchdowns and Ross had six catches for 153 yards and a score in Clemson’s 44-16 win over Alabama in Monday night’s College Football National Championship at Levi’s Stadium

But, according to defensive tackle Quinnen Williams, both Georgia and Oklahoma’s offenses are better than the one the Tide faced Monday night.

Williams took his statement a step further almost refusing to give Lawrence any credit while giving Clemson’s receiving corps – who deserves many of the accolades – all of the acclaim.

“No, they really didn’t do anything that caught us off guard. We knew everything was coming. We ran a zone and they ran go routes. 50-50 balls,” Williams said. “Trevor Lawrence threw the ball up — it ain’t like he just put it on the money, dropped dimes, none of that. He just threw them up and the receivers made plays. You’ve got to give all the respect to the receivers.”

Safety Xavier McKinney said Clemson’s record-setting night was due to errors on Alabama’s part, not anything the Tigers did.

“No, we just didn't execute. We didn't do – we had a lot of busts, a lot of things that we could have done better, and that's basically it,” McKinney said. “He could throw the ball well. There was nothing really different. A lot of it was what we were doing. A lot of stuff that we didn't execute, so I feel like that was just mainly on our part and what we were doing.”

Saban was a little more complimentary of Clemson’s offense and said Lawrence was able to get into a rhythm because Alabama wasn’t able to get any pressure with its defensive front.

“Well, I thought that if we were going to have an opportunity, the best way to defend them is to rush four guys and play different kinds of coverages, and when we rushed four guys, we didn't get a lot of pressure,” Saban said. “Their offensive line did a good job. He was very comfortable in the pocket, had time to throw, and we didn't get him covered very well in the back end at times.

“A combination of those things I think really made it more difficult for us because one of the things that they do extremely well with the players that they have, a mismatch, 8 (Ross) and 5 (Higgins) outside is when you play middle-of-the-field coverage and you try to pressure, they've been very successful against that all year long, and Trevor Lawrence is very good at throwing the fade ball, back shoulders, whatever it is. And their two guys are really, really good at making plays on the 50/50 balls, which we knew would be a big part of what we needed to do well in this game, and I think maybe we made one play on a 50/50 ball and got one other pass interference.”