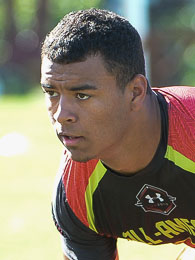 Outside Linebacker
B I O
Number-one outside linebacker in Georgia according to many services...a national top 100 player (#84) by Tom Lemming entering the season...US Army All-American who played in the nationally televised game in San Antonio in January 2014...first-team all-state and Defensive Player of the Year as a senior and junior in the state of Georgia...starter on consecutive State Championship teams in Georgia...they had 14-1 record in 2012 and 15-0 in 2013...the 15-0 record in 2013 included Buford's' win over Gainesville High and Clemson freshman quarterback Deshaun Watson in early September...Watson and Rogers will now be teammates at Clemson...one of the more highly regarded members of the class of 2014, he is ranked #67 in the nation by Rivals.com, second among Clemson signees in this class behind Deshaun Watson...Rivals.com also has him as the fourth best linebacker in the nation and the fifth best player in the state of Georgia...ranked as #145 best player in nation by 247Sports.com, which also sees him as ninth best linebacker and 10th best player in state of Georgia...#14 outside linebacker in the nation by ESPN.com, which also has him #193 best player...ESPN.com also lists Rogers as 15th best player in state of Georgia...a Max Prep All-American as well...named to the Super Six of Gwinnett Country prior to his senior year...named a WSB Player of the Week during his senior year as well...Scout.com has Rogers as #218 player and 10th best middle linebacker...as a junior, Rogers recorded 91 tackles including 16.5 tackles for loss, 6.5 of which were sacks...had four interceptions as a junior in helping Buford to the state championship...also a member of the school chorus and helped produce the school's newscast...committed to Clemson in late May of 2013...recruited to Clemson by Tony Elliott...also had offers from Georgia, Auburn, Florida, North Carolina and Penn State...wore #43 for Buford High School where he played for head coach Jess Simpson.

Mickey Plyler on Rogers: "This is a four-star, top 100 kind of prospect. Rogers surprised some Georgia supporters when he chose Clemson early over the Bulldogs. This is one of the top signees in this class. This is what outside linebackers are supposed to look like. Rogers drops into coverage well and can rush the passer. He played in one of the top programs in the state of Georgia against a high level of competition. Clemson needs help at the SAM linebacker and I think he could compete right away."