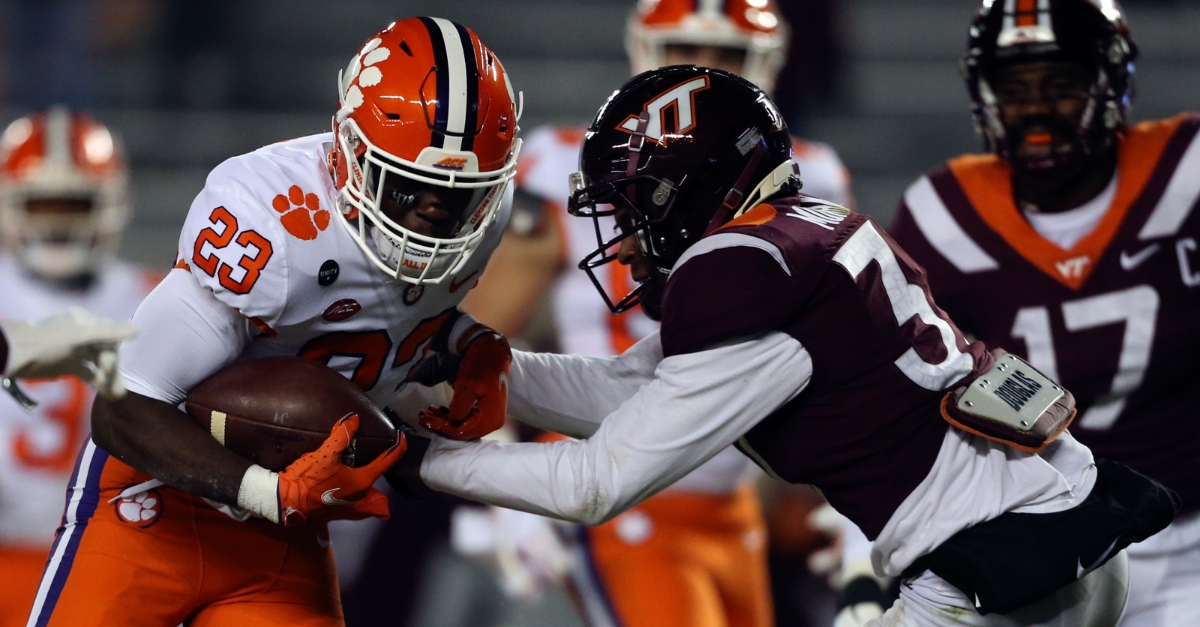 Dixon had some impressive runs against VT (ACC Photo)

The 2020 Clemson seniors improved to 50-4 since 2017, becoming the fourth straight Clemson senior class (and the 11th such class in FBS history) to record 50 wins in four years.

The 2020 Clemson seniors are now 31-2 in ACC regular season play from 2017-20, surpassing the 2018 and 2019 seniors (30 wins each) as the winningest class in school history in regular season conference play. The group ties the four-year conference record of 31, set by multiple Florida State classes from 1995-2000.

Clemson improved to 51-3 against conference opponents since the start of the 2015 season, the first year of Clemson's active run of five consecutive ACC titles.

Clemson won its sixth consecutive game against Virginia Tech, dating to the 2011 season when the Tigers defeated the Hokies twice. It is Clemson’s longest streak in the series since winning nine consecutive games against the Hokies from 1955-85.

Clemson won its 13th consecutive December game, dating to Clemson’s 2011 ACC Championship Game victory against Virginia Tech. Clemson entered the game as one of four schools to be undefeated in December since 2011 with a minimum of four games played, a list that also included Alabama (9-0) and Penn State (5-0).

Clemson improved to 24-13 all-time in December games, including postseason play.

Clemson improved to 3-0 in December games against Virginia Tech all-time, including wins in the 2011 and 2016 ACC Championship Games.

Head Coach Dabo Swinney improved to 6-0 as a head coach vs. Virginia Tech. Virginia Tech is one of five ACC schools against which Swinney is undefeated as head coach, a list that also includes Wake Forest (12-0), Louisville (6-0), Virginia (5-0) and Duke (3-0).

Though 2020 is technically a divisionless season, Clemson improved to 33-8 against opponents historically from the ACC Coastal Division, including postseason play, under Head Coach Dabo Swinney. Clemson has won 19 of its last 20 games against the Coastal Division since 2015.

Clemson improved to 67-3 in regular season play since the start of the 2015 season.

Clemson now has a 107-2 record when totaling more first downs than its opponent since 2011.

Clemson now has a 64-3 record when winning the turnover margin since 2011.

Clemson has now won 86 of its last 88 games, including each of its last 49, when leading at halftime.

Clemson improved to 108-2 since 2011 when leading after three quarters.

The 35-point win ties Clemson’s largest victory margin against Virginia Tech in series history, matching a 35-point margin by Frank Howard’s 1945 team in a 35-0 win. Clemson’s 45 points Saturday were the most points scored in its all-time series with Virginia Tech, surpassing its 42 in the 2016 ACC Championship Game.

Clemson recorded three takeaways and has now recorded at least three takeaways in back-to-back games for the first time since a three-game stretch against Miami (Fla.), Georgia Tech and Syracuse.

After a plus-four margin in turnovers last week, Clemson has now won the turnover margin by multiple turnovers in back-to-back games for the second time this season (plus-two against both Virginia and Miami (Fla.)).

Conversely, Clemson rushed for 238 yards, its second most of the season behind its 258 rushing yards vs. Miami (Fla.). Clemson improved to 67-1 when rushing for at least 200 yards under Dabo Swinney.

Despite being limited to a season-low 52 plays, Clemson averaged a season-high 8.3 yards per play to finish the game with 433 total yards.

Clemson joined 2013 Florida State as the only ACC teams ever to score 34 or more points in each of the first 10 games of a season.

Quarterback Trevor Lawrence completed 12-of-22 passes for 195 yards with one passing touchdown and added seven carries for 41 yards and two rushing touchdowns.

Lawrence improved to 33-1 as a starter, breaking the school record for wins as a starting quarterback shared previously by Rodney Williams, Tajh Boyd and Deshaun Watson (32 wins each).

Lawrence added his second touchdown run on a seven-yard rush in the third quarter. His two rushing touchdowns tied a career high set in this year’s season opener against Wake Forest.

The second rushing touchdown of the game for Lawrence was his 16th of his career, moving him into a tie with Kelly Bryant for fifth-most by a Clemson quarterback in the modern era.

The touchdown pass to Powell was Lawrence’s 12th completion of the night. On that completion, Lawrence (700) joined Tajh Boyd (901), Charlie Whitehurst (817) and Deshaun Watson (814) as the only Clemson players to reach 700 career completions.

The pass was Lawrence’s 18th touchdown pass of 50 yards or more, surpassing Tajh Boyd (17) for the most by a Clemson quarterback since 1950.

Powell has now caught a touchdown in three straight games for the first time in his career. He is the second Clemson player to accomplish the feat this year, joining tight end Davis Allen, who scored against Virginia, Miami (Fla.) and Georgia Tech in three straight weeks.

Running back Darien Rencher, who won the Disney Spirit Award earlier this week, scored on a career-long 50-yard run in the fourth quarter.

WIth the touchdown reception by Powell and the touchdown run by Rencher, Clemson produced multiple touchdowns of 50 yards or more in a single game for the first time since last year’s Fiesta Bowl against Ohio State.

Running back Lyn-J Dixon scored his second touchdown of the season on a 19-yard touchdown run in the second quarter.

Dixon has now scored a touchdown in consecutive games for the first time since the first two games of the 2019 season against Georgia Tech and Texas A&M.

Defensive end Myles Murphy forced his third fumble of the season in the third quarter. It was recovered by cornerback Mario Goodrich, his first career fumble recovery.

Cornerback Derion Kendrick scored on a 66-yard fumble return in the third quarter. It was his second career touchdown, joining an interception return touchdown against Florida State in 2019.

With Kendrick’s fumble return touchdown, Clemson recorded a third scoop-and-score in a season for the first time in school records back to 1951.

Clemson has now recorded at least three defensive touchdowns in four straight seasons, its longest streak in records back to 1951.

Bentley later added a full sack on a fourth down in the fourth quarter to also join Thomas, Baylon Spector and Myles Murphy for the team lead with 3.5 sacks this season. Clemson entered the game second in the country in team sacks despite no single player having 4.0 sacks on the season.

With the sacks, Clemson recorded multiple sacks in a 16th straight game, tying a 16-game streak from 2018-19 for the Tigers' third-longest streak since 1980. Clemson now has multiple sacks in 32 of its last 33 games.