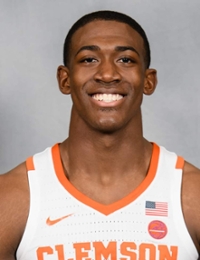 Center
B I O
Before Clemson
Came to Clemson as a four-star prospect … ranked No. 1 in the state of Alabama and No. 12 in the country at his position, according to ESPN … averaged 19.0 points, 15.0 rebounds and 5.0 blocks per game as a senior at Hoover High School … ended his career with averages of 15.0 points, 12.0 rebounds and 4.0 blocks across all games at Homewood and Hoover … chose Clemson over Auburn, Alabama, Harvard, Georgia and Georgia Tech.