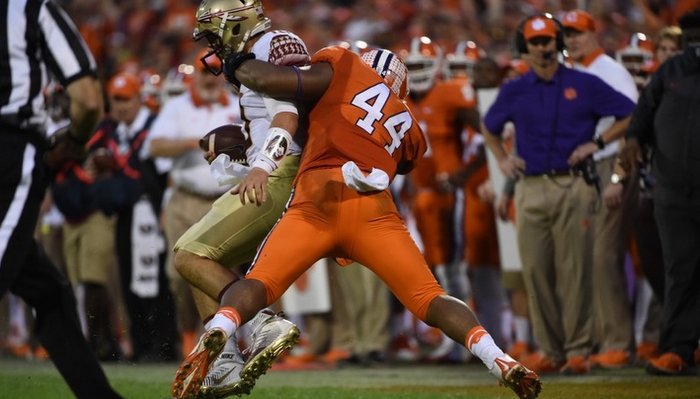 Saturday is a truly special day at Clemson. I hate saying goodbye to our seniors every year, but I love the way we honor them by letting them run down the hill individually.

The Class of 2015 has a 42-7 overall record and with a win Saturday can set the school record for most wins in a four-year period. In terms of winning percentage, this class has an .857 mark, best in school history.

Most of the information in this blog is from Tim Bourret's game notes, but I wanted to give this senior class their due and Tim put together a very impressive list of this class' accomplishments.

The seniors already have the school record for conference wins with 27, a record that was reached last week with the win at Syracuse. This group is an incredible 27-4 vs. the ACC entering the Wake Forest game. With a win Saturday, it would give this group a .875 winning percentage in league play, the best since the 1941 class was 16-1-1 in Southern Conference play, a .917 winning percentage. It would be a record for the Tigers in ACC play.

This class is 25-2 at home over the last four years and with a win Saturday will tie the school record for home wins by a senior class. Last year’s seniors were 26-2. A 26-2 record would also tie the mark for the best winning percentage by a class in Memorial Stadium, a facility that dates to 1942. Clemson’s seniors of 1930 are the only class better from a percentage standpoint with a 13-0-1 record for a .964 percent- age. They played their games at Riggs Field.

In terms of national rankings, this group has been ranked in 58 of 61 polls so far. That includes a streak of 15 in a row that is active. This week marked the 29th time this class was ranked in the top 10, and of course this year tied the record for the highest national ranking with

a No. 1 that first appeared with the release of the first College Football Playoff Poll on November 3.

The class has already been a part of some of the biggest wins in Clemson history. The Tigers already have wins over top 10 teams from LSU, Ohio State, Georgia, and Notre Dame. There is a strong chance Clemson will face another top 10 team in the postseason.

The victory at Syracuse gave Clemson a 10-0 record for 2015 and assured Clemson of a school-record fifth straight season of at least ten wins. Clemson became just the 15th different school in college football history (current FBS schools) to have five consecutive seasons of at least ten wins.

This class has meant so much to Clemson, and I really want to encourage fans to get in Death Valley early this week to say thanks for years of hard work and some of the best moments in Clemson football history.