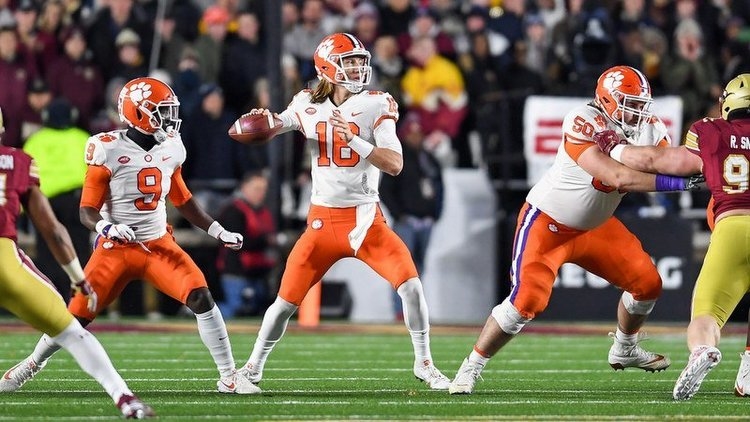 Analytics-based Pro Football Focus released the final stretch of its top-50 NCAA players for 2019 on Thursday -- and Clemson's Trevor Lawrence leads the way.

Lawrence holds a 90.7 grade as the nation's top player.

"Lawrence’s overall grade is the highest we’ve ever given a true freshman as his debut season for the Tigers reached historic heights," PFF's Cam Mellor said. "He can pepper the ball to all levels of the field and is wise beyond his age when it comes to leading the defending National Champs in 2019. Doesn’t matter whether he was pressured in the pocket or kept clean from it, Lawrence can dot the field with beautifully-placed balls and has elevated his already-talented receiving corps to new heights in just one season. Imagine what he and the rest of that five-star offense can do in Year 2."

Six total Tigers were in the top-33 of the list, which doubled up the next nearest teams (Alabama and Wisconsin with three).

Reigning ACC player of the year Travis Etienne was ranked the No. 2 running back in college football and No. 33 player overall. His 8.1 yards per carry last season ranks third-best among returning running backs (per NCAA stat qualification).

Versatile linebacker Isaiah Simmons just cracked the top-30 (30), with PFF tallying that he's allowed one touchdown and forced nine incompletions in 59 passing targets his way the last two seasons. Just ahead of him on the defensive side is sophomore defensive end Xavier Thomas at No. 29, who posted the third-highest pressure rate among returning Power 5 edge rushers according to PFF (17.3).

Lawrence's top-two targets are both in the top-20 players of college football, with Justyn Ross not far behind at No. 3 and Tee Higgins is No. 19. PFF says that Ross posted the highest-graded season for a true freshman receiver ever last year with a yards per reception stat (21.7) the highest among qualified returning receivers.