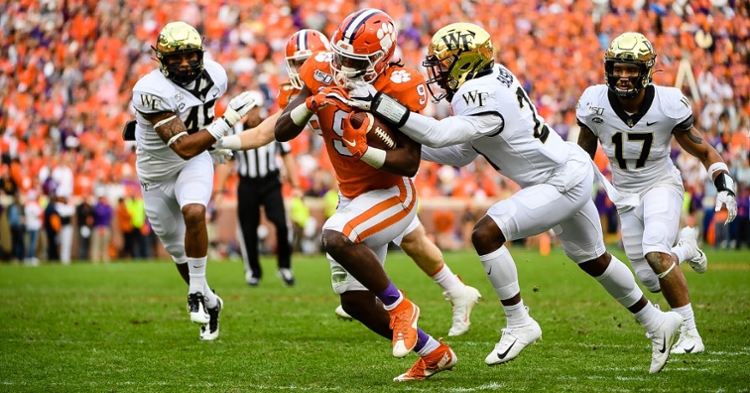 According to ESPN Stats & Info, Clemson joined 1944 Army and 1972 Nebraska as the only teams in the AP Poll era to win four consecutive games by 45 or more points.

Clemson won a sixth straight game by 30 or more points to break a tie with 2013 Florida State for the longest such streak in conference history.

Including a 63-3 victory against Wake Forest last year, Clemson has outscored Wake Forest, 115-6, across the last two seasons.

The five first downs surrendered are Clemson’s fewest since the 2017 Kent State game (five) and the fewest against an ACC opponent since the 2009 Boston College game (four).

Clemson’s 105 yards allowed were the program’s fewest since allowing 102 to South Carolina State in 2016. It was Clemson’s fewest yards allowed against an FBS and ACC opponent since holding Boston College to 54 total yards in 2009.

Clemson allowed only 2.06 yards per play (105 yards on 51 plays). It was the lowest yards-per-play average allowed by Clemson since last season at Boston College (1.98).

Clemson held an 11th straight opponent below 300 yards of total offense to become the first team since the turn of the century to open a season holding opponents below 300 yards in each of the first 11 games. ESPN Stats & Info says it is the first such occurrence in records back to 1996.

Clemson has now held 14 consecutive opponents to 20 or fewer points for the first time since the 1949-51 seasons under Head Coach Frank Howard.

Clemson held a ninth consecutive opponent below 200 passing yards for the first time since games 3-11 of the 2008 season.

Clemson held a sixth consecutive opponent to a completion percentage of 50.0 percent or worse, Clemson's first such streak since a seven-game span including the 1999 season finale and first six games of 2000.

Clemson outgained Wake Forest in passing yards, 348-41, and produced more passing yards than its opponent in a 14th consecutive game, dating to last season, for the first time since an 18-game streak across the 2015-17 seasons. The 307-yard difference in passing yardage was Clemson’s largest in a single game since a 2017 game against The Citadel (418).

Clemson reached 50 points in a fourth straight game for the first time in program history.

Clemson has now scored 45 points in six consecutive games for the first time in school history. The streak matches the 2013 Florida State Seminoles for the longest in ACC history.

Clemson gained 516 total yards and has now reached 500 yards in six straight games for the first time since October and November of the 2016 season.

Clemson averaged 7.1 yards per play and reached 7.0 yards per play for a fifth game in a row, surpassing the first four games of 2018 for the program's longest streak on record.

With five passing touchdowns in the game, Clemson has now thrown three or more touchdowns in six straight games for the first time in school history.

In addition, Clemson has now rushed for multiple touchdowns in 12 consecutive games for the first time since a 15-game streak across the 2016-17 seasons.

Quarterback Trevor Lawrence completed 21-of-27 passes for 272 yards with four touchdowns and no interceptions. His 211.3 pass efficiency rating marks his fourth game this season -- and the sixth of his career -- with a 200.0 or better passer rating.

Lawrence has now thrown at least three touchdown passes in six consecutive games for the first time in his career, a first in school history. He had already been the first Clemson quarterback to accomplish the feat in five straight games.

Lawrence has now thrown a touchdown pass in 21 consecutive games. His 21-game streak is the longest active streak in the country. (Note: UCF's McKenzie Milton had a 24-game streak prior to suffering an injury in November 2018 that will likely preclude him from playing in 2019).

With 268 combined passing and rushing yards in the game, Lawrence (6,349) passed Steve Fuller (6,096) for sixth on the school's leaderboard for career total offense.

Running back Travis Etienne rushed 16 times for 121 yards and a touchdown. He also caught three passes for 37 yards.

With another 100-yard performance, Etienne took sole possession of the school record for consecutive 100-yard rushing games by reaching the mark in a sixth straight game, surpassing five-game streaks by Kenny Flowers (1985) and Raymond Priester (1996-97).

Etienne’s six consecutive 100-yard rushing games moved him into a tie for the eighth-longest streak in ACC history.

Etienne (16) passed Raymond Priester (15) for sole possession of second on Clemson's all-time leaderboard for career 100-yard rushing games. It pulled him one game shy of Wayne Gallman's school career record of 17 from 2014-16.

Etienne posted his seventh 100-yard rushing game this season to tie Raymond Priester (seven in 1996) and Kenny Flowers (seven in 1985) for third-most in a season in school history.

During the game, Etienne (4,535) passed Travis Zachery (4,391) for fifth on Clemson's leaderboard for career all-purpose yards.

Etienne has now rushed for a touchdown in five straight games for the first time since a six-game streak across the final five games of 2018 and the 2019 season opener. It represents his third career streak of five games or more with a rushing touchdown.

The receiving touchdowns were Higgins’ 20th, 21st and 22nd of his career, passing Mike Williams (21 from 2013-16) for third-most career touchdown receptions in school history.

Higgins has now caught a touchdown in three straight games for the first time this season. He caught touchdown passes in five straight games across the final four games of the 2018 season and the 2019 season opener.

Etienne scored Clemson’s second touchdown of the game on its second drive, punctuating the possession with a 14-yard touchdown run, the 51st rushing touchdown of his career.

The rushing touchdown moved Etienne past Louisville’s Lamar Jackson (50) for sole possession of the second-most career rushing touchdowns in ACC history, one shy of the record held by Pitt’s James Connor (52).

Higgins’ second and third touchdowns were scored with 42 seconds and 13 seconds remaining in the second quarter, respectively. The 29 elapsed seconds were the shortest period of time between touchdowns for a Clemson player since Derrick Hamilton scored 14 seconds apart on touchdown passes from Charlie Whitehurst against Duke in 2003.

Wide receiver Frank Ladson Jr. recorded his third touchdown reception of the season on a 10-yard pass from Lawrence in the third quarter. It was his first touchdown since the third game of the season at Syracuse.

Dixon recorded a career-long 55-yard reception in the third quarter. On the following play, he rushed nine yards into the end zone for his fifth rushing touchdown of the season.

Wide receiver Joseph Ngata recorded his third touchdown reception of the season on a 21-yard touchdown pass from Chase Brice in the fourth quarter.

Safety Tanner Muse added to his single-season career high in interceptions with his fourth interception of the season. It was the seventh of his career.

Muse later added his second sack of the season, the fourth of his career.

With Muse’s interception, Clemson produced a takeaway for a sixth consecutive game and for the 14th time in 15 games, dating to 2018.

Cornerback A.J. Terrell added his second interception of the season in the second quarter. He returned the interception 37 yards to the Wake Forest 30-yard line to set up Lawrence’s 30-yard touchdown to Higgins one play later.

Clemson has now recorded multiple takeaways in three straight games for the first time since a five-game span across the final three games of 2018 and the first two games of 2019.

All of Clemson’s seniors were captains for the contest. Representing the team for the coin toss were tackle Tremayne Anchrum, safety Tanner Muse, offensive lineman Sean Pollard and linebacker Chad Smith.

Clemson won the first 11 games of a season for the third time under Head Coach Dabo Swinney (2015 and 2018). Swinney had already been the first coach in Clemson history to coach the school to multiple 11-0 starts, as legendary coaches Frank Howard and Danny Ford only accomplished the feat once each, in 1948 and 1981, respectively.

Clemson has now posted only the 22nd winning streak of 26 or more games in major college football history.

Clemson’s seniors earned their 52nd victory in 55 games, tying the 2018 Alabama seniors for the fastest to 52 wins in FBS history.

Clemson finished with an undefeated home record for a third consecutive season, a first under Head Coach Dabo Swinney.

Clemson has now gone undefeated at home in three straight seasons for the first time since 1981-83, which included a tie in both 1982 and 1983. Clemson's last time posting a perfect home record with no ties in three straight years had been 1939-41, when the program played only two home games a year.

Clemson won its seventh home game this year to allow the 2019 senior class to tie the school record for most home wins by a senior class, matching the mark set by the 2017 and 2018 seniors (27 each).

Clemson finished with a perfect regular season ACC record in back-to-back seasons for the first time since a three-season stretch across the 1981-83 seasons.

Clemson defeated its 21st consecutive ACC opponent, including postseason play, dating to October 2017 against Georgia Tech. The 21st consecutive victory against a conference opponent (including postseason play) is the longest such streak in school history. It was Clemson's 19th straight win in ACC regular season play, one shy of the school-record 20-game streak posted by the 1981-84 Tigers.

Head Coach Dabo Swinney improved to 11-0 as a head coach against Wake Forest. Wake Forest is one of five ACC schools against whom Swinney is undefeated as head coach, a list that also includes Duke (3-0), Louisville (6-0), Virginia (3-0) and Virginia Tech (5-0).

Clemson defeated an ACC Atlantic Division opponent for a 14th straight time and for the 34th time in 35 opportunities.

Clemson has now won 72 of its last 74 games against unranked teams.

Clemson has now won 76 of its last 78 games when leading at halftime.

Clemson improved to 97-2 since 2011 when leading after three quarters.

Clemson now has a 97-2 record when totaling more first downs than its opponent since 2011.

Clemson has now recorded a 55-3 record when winning the turnover margin since 2011.

Clemson has now won 79 straight games when holding teams under 23 points (dates to 2010).