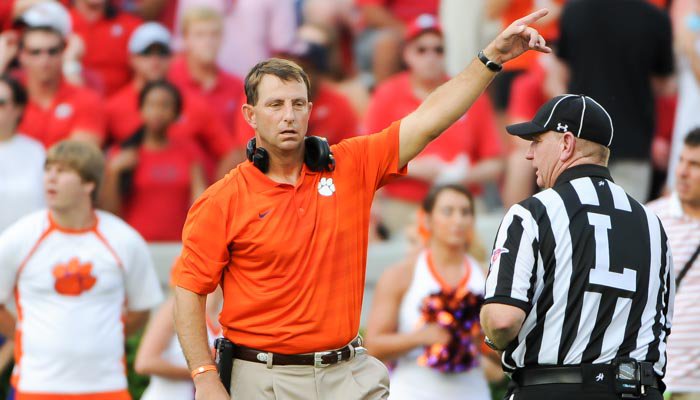 We had a great trip to Auburn this weekend. The Auburn fan base was very hospitable, and the campus was as nice as I remember it from my other trips to the Plains.

This trip was different in that their fans are skeptical about the program now. A few made comments about their arrests recently, and they doubted the staff's ability to compete. They booed several times when the offense screwed up. And the noise was nowhere near as loud as it was in 2010.

Clemson did not play well and has a lot to clean up, but an opening road win is never taken for granted. It was a crazy opening weekend in college football, and the Tigers were the only top 25 team to have a true road win.

The defense held Auburn to 87 yards rushing by dominating the line of scrimmage. Dexter Lawrence was a beast. Christian Wilkins played defensive end like he had been there all of his life. Clelin Ferrell was as good as advertised. Carlos Watkins had to impress NFL scouts. The Tigers had 14 tackles for a loss and four sacks.

I thought the linebackers tackled well. Ben Boulware had one boneheaded penalty, but his interception at the goal line was a big key to the win. I thought Kendall Joseph was active and instinctive. He found the football all night. You can tell Brent Venables trusts Jalen Williams in several roles too.

The secondary played well with the exception of a couple of blown coverages. Cordrea Tankersley picked up right where he left off. He was physical and made a couple of nice plays to spark the rest of the secondary. Van Smith was active and didn't look to blow any coverages. Jadar Johnson had two busts, but his interception and two batted down Hail Marys sealed the win. I thought all of the corners played winning ball.

Auburn is limited at several offensive positions, but Clemson did hold them to 262 yards and just 3-17 on third down.

Another highlight was how well Clemson defended Auburn's tricks. Gus Malzahn's substitutions are a bear to deal with, but Clemson responded well and never got caught off guard. Auburn even tried the old Pop Warner single wing look with four backs lined up between the tackles and tried misdirection off of that package, but to no avail.

Offensively the news wasn't quite as positive. There were some positives, though. Deshaun Watson did not play his best game but was on point with the back shoulder throw to Mike Williams. Watson was 19 of 34 for 248 yards with a touchdown and a pick. He was limited in the run game to just 21 yards on 11 carries.

Williams returned to the field with a great night with nine catches for 174 yards, but did have three touchdowns in his hands and came away with none and he did have a key fumble.

Wayne Gallman had a solid night with 124 yards rushing and a score. The best thing we saw from Gallman was his pass pro. The only negative we saw here was his running out of bounds twice on the last drive.

Artavis Scott had three catches for 30 yards, and Hunter Renfrow added three for 27 including a terrific touchdown grab. Jordan Leggett was flagged for a false start and was not a factor in the passing game, but did throw a great seal block on Gallman's touchdown.

The negatives in the wideout group were Deon Cain's alligator arms that almost caused an early interception and Ray Ray McCloud's route on Watson's lone interception. I was surprised Clemson's receivers could not separate more from Auburn's secondary, but the replay did show their defensive backs often had a hand full of jerseys down field.

The offensive line didn't dominate but give Auburn credit. Auburn's front seven is talented and played well with an aggressive scheme. Perhaps the best news there was the O-line did not allow a sack.

Like the offense, the special teams were a mixed bag. Seth Ryan had a great hold after a high snap on one of Greg Huegel's two field goals. Huegel continued to struggle with a missed PAT and pulled his first kickoff out of bounds. Andy Teasdall punted well averaging 41.5 yards per punt. The coverage teams were better, but the kickoff return teams had only one return for 16 yards.

The controversial decision to go for it by Dabo on the final drive is understandable, but I disagreed with the call. I would also point out that if you are going to go for it on fourth and four, then call a time out and spread the field and maybe throw the ball in that situation.

Like many openers, Clemson can take some positives and negatives. They won the turnover battle 3-2 and were the less penalized team Saturday night. At the same time, the offense was not clicking and missed several chances to put the game away.

In summary, I am very encouraged by the defense, but I also realize how limited Auburn is on offense. I am concerned by the offense, but also give Auburn credit for playing well and being very talented on defense. And the special teams still have work to do.

Leaving the stadium Saturday night I got a text from a friend that said this game looked exactly like the Louisville game last year. I could not agree more. The offense looked conservative and out of sync at times and the defense took advantage of the opponent's offensive issues.

The best news is Clemson came away with a road win at an SEC school at night and came away very healthy. Now the Tigers come home for the first time after five straight games away from Death Valley. There is work to be done, but the next two opponents should allow some of that work to take place.