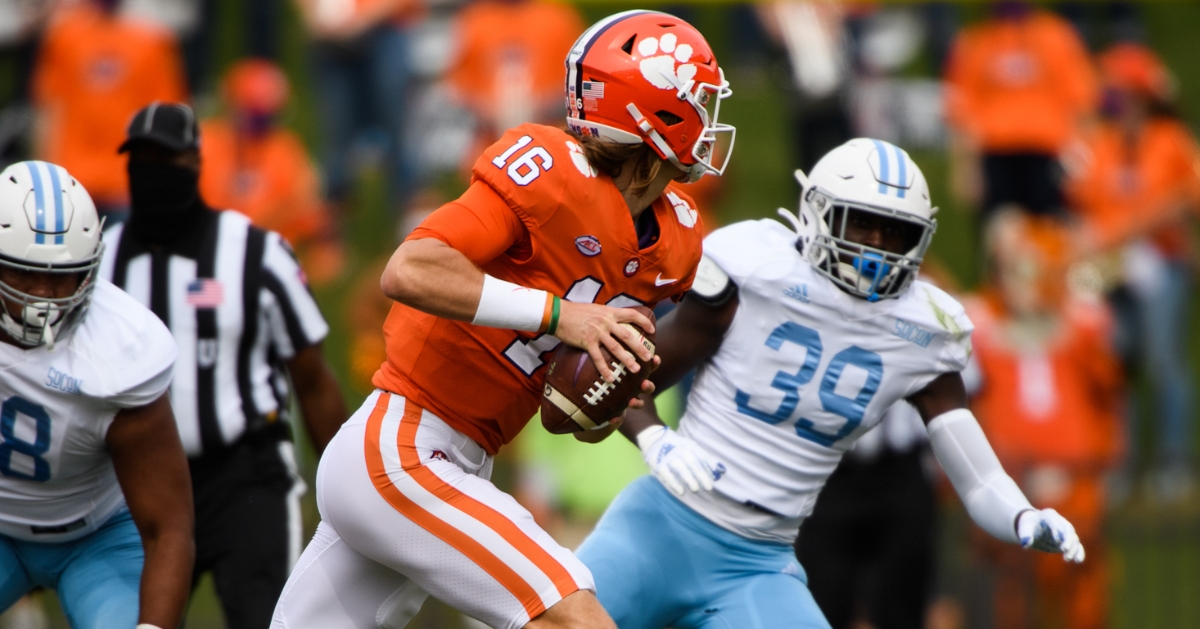 Lawrence looks for a receiver against The Citadel.

There are things we have learned, however, and as the weekend dawns with another slate of football games we will take a look.

*At quarterback Trevor Lawrence looks the same and he looks different. He’s the same poised and strong-armed quarterback we’ve seen in the first two seasons, but he looks mature and in complete control of the offense. He’s also throwing the ball over the field, not just to the sidelines, and it’s making a difference.

He’s the front runner for the Heisman right now.

*Braden Galloway wasn’t a big part of the offensive game plan against The Citadel, but he didn’t have to be. He will come into play more and more as the Tigers face more athletic defenses. As one person close to the team told me this week, opposing defenses will soon have to make a decision on passing downs – do you cover Travis Etienne or Galloway coming out late? Pick your poison and hope for the best.

*We’ve mentioned it before, but we really like what Frank Ladson brings to the table. He was a deep threat against The Citadel, and his catch in the middle of the field for the touchdown was a thing of beauty. As Joseph Ngata continues to struggle with injuries, Ladson is stepping in as one of Lawrence’s favorite targets.

*Defensively, the Tigers tossed a shutout against the option attack of The Citadel and it looks like Brent Venables finally has a full arsenal of weapons. The defensive line has been fantastic despite missing Xavier Thomas, Justin Foster, and Tyler Davis for The Citadel game.

Freshman defensive end Myles Murphy has been a big part of that success. Murphy has been credited with a team-high seven “stops”, which are tackles that constitute a failure for the offense. He also has the only forced fumble on the defense.

And then there’s Bryan Bresee, who has blocked a field goal and been named the True Freshman of the Week twice by Pro Football Focus.

With the defensive line playing well, Venables can bring pressure from anywhere on the field, and he has the pieces in the secondary to cover receivers long enough for the defensive line to get pressure. The secondary really hasn’t played with a full roster – Mario Goodrich missed two games for unnamed reasons, and Derion Kendrick missed the opener. Add in the fact that The Citadel doesn’t throw the ball that often and we have yet to see the full secondary in action and tested.

It’s coming, however, with Virginia and then Miami on the schedule over the next few weeks.

On special teams, kicker BT Potter has looked confident and hit a 52-yarder at Wake Forest. He’s hit all three of his field goal attempts. Punter Will Spiers has been consistent through the first two games and looks like (hopefully) that he’s turned the corner.

So, what do we know? The offense is explosive, Lawrence is better than ever, the younger players are getting better, Venables has a full stable of thoroughbreds, and special teams look vastly improved.

Clemson head coach Dabo Swinney has said this might be his most talented team but they are young. They are indeed young, but getting experience each week. By the time the postseason rolls around this will be the monster nobody wants to play.