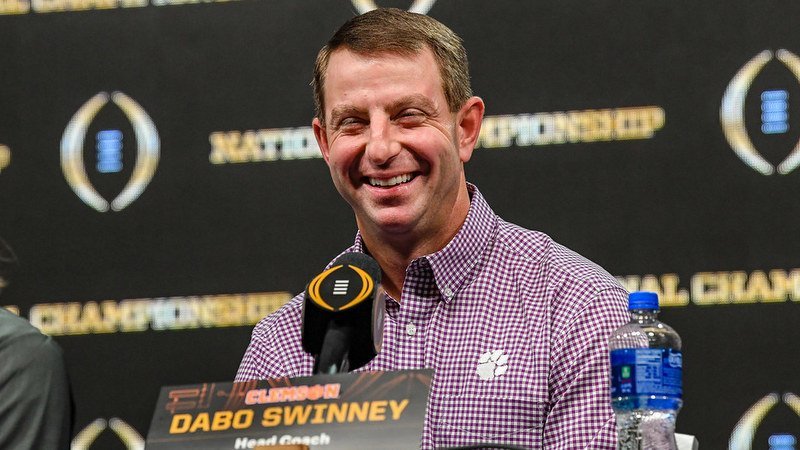 Swinney has plenty to smile about these days

Clemson’s 2020 recruiting class is already great and has a chance to go down among the best in school history, if not the best. The month of May could see it get even better and head coach Dabo Swinney’s talking point of Clemson never having a top-ranked recruiting class could fall by the wayside.

As of May 1, the Tigers have the third-best recruiting class in the country after LSU and Alabama on both the 247 and Rivals sites. The Tigers have 12 commitments for the 2020 recruiting cycle, and if you follow 247 all 12 are either 5-stars or 4-stars. If you follow Rivals, all but one are either 5-stars or 4-stars. The best news is that this class is loaded on the offensive line, an area where Clemson has struggled on the recruiting trail in recent years.

To make things even better, the last two commitments have come from 5-star DL Bryan Bresee and 5-star DB Fred Davis. In other words, this class is great if it stopped right where it is (even though it would be small, it would be packed with top prospects.)

The good news is that it’s about to get even better.

We will start with 5-star quarterback DJ Uiagalelei out of Bellflower (CA) John Bosco. Uiagalelei announced Tuesday evening that he would have a big announcement Wednesday, and I expect that to be a commitment date. He’s thrown out May 5 in the past and he’s told me it might be later in the month, but whatever the date, I think Clemson is still in great shape here despite the recent visit to Oregon. I spoke with an Oregon recruiting writer, and he said the feeling in Eugene is that this Uiagalelei is Clemson’s to lose.

Bowman announced Clemson as his leader a month ago and we have no reason to believe that’s changed.

Bowman mentioned that he might not make a decision this spring, but that could change as Clemson’s recruiting class begins to fill.

Five-star defensive end Myles Murphy out of Powder Springs (GA) Hillgrove announced recently that he will commit on May 17th. He told us a few weeks ago that he had a school in mind, and recent comments suggest the school he’s chosen fits and academic need as well as an athletic need.

His last visit to Clemson? It was all about the academic side of things.

“Really it's the great environment that they have and the great players that they produce because of the atmosphere and what they teach into the boys - the PAW Journey program,” Murphy said. “After college, they really try to push them into the real world by giving them job opportunities, internships and some of them went out of the country. Some of them went to New York over spring break. That's what I really like to see out of Clemson.”

After Clemson won the National Championship in 2016, many wondered if it would resonate on the recruiting trail. It made am impact, but maybe not as much as people had hoped. But over the last several months, the Clemson hype machine has gone full bore, and there are kids who are juniors now that have watched Clemson play in the College Football Playoff four consecutive seasons, they’ve watched the NFL Draft year after year, and they’ve seen the Clemson spring game turn into a three-hour long Clemson informercial.

Add in this past National Championship and the facilities and the publicity given to the Power Rangers, wide receiver Justyn Ross, quarterback Trevor Lawrence, running back Travis Etienne and others and Clemson is the “it” place in college football right now.

Here is an astounding number for you – Clemson has doled out just 94 offers for the 2020 class. The Tigers are able to cherry-pick the players they want, and it shows. For peer comparison, Alabama has doled out 198 offers, Auburn 227 offers, FSU 200 offers, and Georgia has sent out 217 offers.

Clemson is in position to land several other top prospects and could land a 5-star player at quarterback, running back, wide receiver, defensive end, defensive tackle and cornerback.

Bresee told me that Swinney is already joking that he won’t get to say the Tigers have never had a number one class.

“We will definitely have the number one class,” Bresee said. “He (Swinney) was talking about that before. He said you guys are going to ruin my speech about never having a number one class. That is our class' job now, is to take that number one spot.”