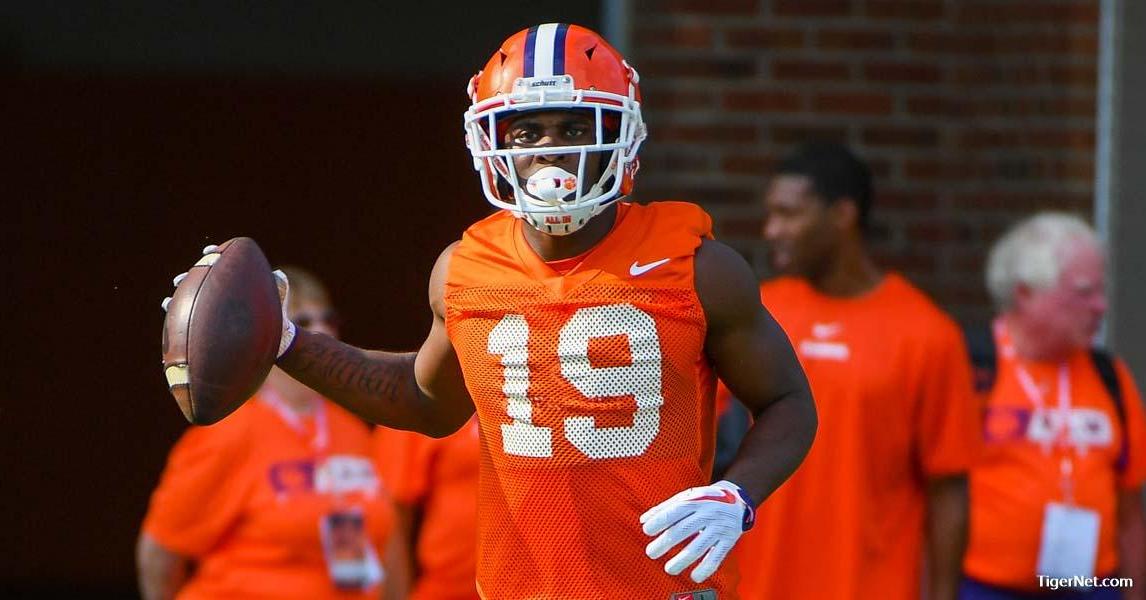 The 2019 Clemson football season got underway Friday afternoon, 27 days before the season opener against Georgia Tech. As the team broke from calisthenics, right tackle Tremayne Anchrum bellowed, “If you’re not going to do it right, then don’t do it.” As the team headed to midfield, senior safety K’Von Wallace led out a big whoop, jumped in the air and skipped to the huddle. Senior safety Tanner Muse was also in the middle of everything.

Now we have a better idea of who the leaders will be.

Members of the media were allowed to watch the first five periods of practice, and we have several nuggets to pass along.

*Wide receiver Amaro Rodgers, tight end Davis Allen, and linebacker Bryton Constantin were all in yellow and were making laps around the field with strength coach Paul Hogan.

*The first-team offensive line was what we expected – Jackson Carman at left tackle, John Simpson at left guard, Sean Pollard at center, Gage Cervenka at right guard, and Anchrum at right tackle. Diondre Overton was lined up as the slot receiver – with Higgins and Ross on the outside – and JC Chalk took the first snaps at tight end.

Jordan McFadden started off as the second-team left tackle, with Matt Bockhorst at left guard, Cade Stewart at center, Chandler Reeves at right guard and Blake Vinson at right tackle.

*Running back Travis Etienne looks thicker in his lower body, but the added size didn’t seem to hinder his burst. We obviously didn’t see him run top speed, but he looks to be in great shape.

*Tight end Jaelyn Lay checked in at 273 pounds, and he looked a little slow at times. At one point, tight ends coach Danny Pearman was yelling at Lay to run faster, but it looked like he was struggling a little to get to full speed. Will be interesting to talk to the offensive coaches and see if they want him a little lighter.

*Tavien Feaster was the big receiving option out of the backfield, and it looks like Mikey Dukes is going to be that guy this season. Dukes has great hands and showed an incredible vertical leap during some of the drills we watched. He also looks like he might be a little more game-ready than the other freshman, Chez Mellusi.

*Freshman corner Andrew Booth got some reps at punt return.

*More on the freshmen later – we have to head back out to practice for post-practice interviews. Hope this can hold you over.