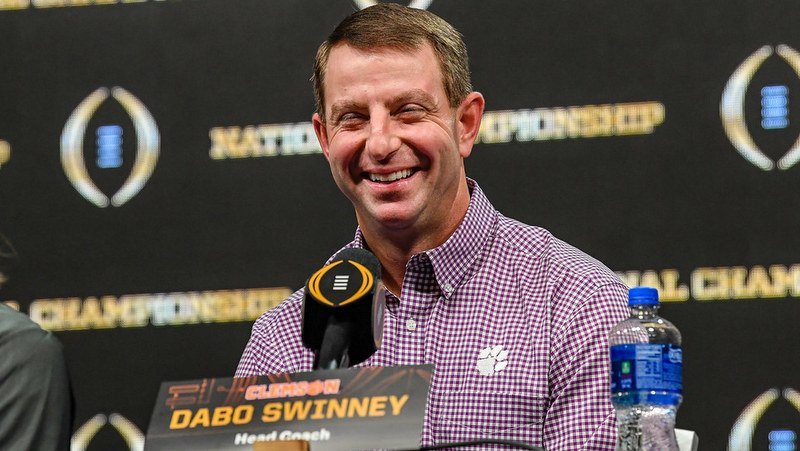 Swinney won't extend an offer to a freshman or sophomore

CHARLOTTE, NC – Some schools offer hundreds of prospects each recruiting cycle, hoping to land the twenty or so they think can help their program. Clemson head coach Dabo Swinney handles offer in a different way than other coaches, and it’s working. Oh boy is it working.

The Tigers sit at No. 1 overall in the 247Sports team rankings and No. 3 according to Rivals, so Swinney’s wait-and-see approach hasn’t hurt Clemson’s ability to land some of the nation’s top recruits.

“I don’t offer freshmen and sophomores. That’s my personal philosophy. It puts my coaches in a bind. There’s this culture out there where this 10th-grader has 50 offers,” Swinney said. “So I’m the bad guy and I don’t mind being the bad guy. My coaches will sometimes tell (recruits), ‘Hey, I love ya, and at some point we’re going to offer you, but this is Coach Swinney’s philosophy.’ It’s just the way it is. But at the end of the day, I’m for slowing the process down, on both sides of the aisle... If a freshman or sophomore gets an offer, it came from me. And I’ve offered guys - Deshaun (Watson) committed to me as a sophomore. But I knew him. He had been to our camps and been on campus.”

Even the great Trevor Lawrence had to wait on an offer.

“Trevor (Lawrence), I didn’t offer him (initially). His freshman year, he sat in my office and already had 50 offers. I said, ‘I don’t even know you.’ So if he commits, I don’t know anything about him,” Swinney said. “I just like to have more information. I like to see guys grow and mature and drive a car. Have a girlfriend. Go to prom. Is it too much to ask to play two years of varsity football (before an offer)? I don’t think so. That’s just my own personal opinion and sometimes that rubs people wrong and we lose out on guys and that’s fine.

“I’ll go get the seniors. What’s happened is that so many decisions were made early on these kids then they don’t develop. The bad side is that they (teams) take commitments from these kids and then they bail on them and back out of them because they don’t develop like they were supposed to. I wish the whole process was later. That’s just how we do it.”

The Tigers are also able to pounce late on interested prospects, including standouts like Travis Etienne, Isaiah Simmons, and K’von Wallace.

“Again, I didn’t know who Travis Etienne was until November of his senior year of high school. He’s pretty good. I didn’t know who Isaiah Simmons was - didn’t have a clue,” Swinney said. “Never heard of him. We weren’t recruiting DBs in that class. Then all of a sudden after the national championship - I’m not one who goes and recruits and telling guys to leave. I expect everyone to be back... That’s why every year I seem to have scholarships left over. I don’t think about who I’ve got to run off because we oversigned. I just don’t operate that way.

“With Isaiah, we have three or four DBs decided to leave early and now I’ve got three weeks to recruit. I hadn’t ever heard of K’Von Wallace. Ever. Bring him in midweek - and K’Von’s pretty good. Isaiah’s pretty good. Travis Etienne’s pretty good. Trayvon Mullen - we got all those guys in that three week period. I wasn’t recruiting anyone (before then).”