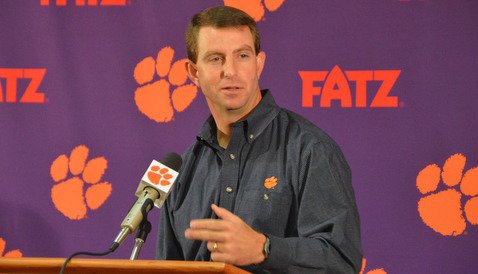 CLEMSON – There are only 200 tickets remaining for Clemson’s first ever showdown with the Louisville Cardinals. After Louisville head coach Bobby Petrino’s comments about Death Valley yesterday, there won’t be a lack of excitement or noise at 3:30 Saturday afternoon.

Dabo Swinney
Head Coach
View Full Profile was asked about Petrino’s comments during his Tuesday press conference in the WestZone and he said that while Syracuse’s Carrier Dome was loud at times last year, it simply doesn’t compare to Death Valley.

“Well it was loud up there for a little while,” Swinney said Tuesday. “We kind of hit some big plays early and that changed. We think we have a great environment here for sure. They've played in some big environment. I hope we sell those 200 tickets I know that. I know that we'll have a special environment here. “

Louisville comes to Clemson ranked 53rd in scoring offense and sixth in scoring defense, nationally, and Swnney said the Cardinals pose a great challenge for his squad.

“This is a very good team coming in here,” he said. “This is going to be a very big challenge. No doubt about that. They play with a lot of confidence. They've had a bunch of big wins and they have a bunch of veteran guys who have been a part of some big games. Good team.”

Defensively, Louisville also ranks first in the country in total defense. Swinney said the only way to describe the defensive coordinator Todd Grantham’s group is aggressive.

“Biggest word to describe their defense is aggressive,” he said. “Very aggressive. They were No. 1 in the nation last year defensively. And they are No. 1 this year. Very salty. Fast. Athletic. Long guys. No. 55 [linebacker Keith Kelsey] is one of the top sackers in the country throughout his career. No. 94 [linebacker Lorenzo Mauldin] will come off the edge, up the middle and they'll move him around. They create confusion as far as where their pressure is coming from. They do an excellent job on the back end. It's the most aggressive secondary we've played. Their safeties really want to be involved.”

Offensively, the Cardinals have been without sophomore quarterback Will Gardner and wide receiver DeVante Parker but both should be available Saturday, creating an even bigger challenge for Clemson’s defense.

“Offensively, they want to run the football,” Swinney said. “They have four backs who are big and strong and want to force the issues. We've got to do a great job at the point of attack and are gap strong. You have to tackle well. When you play a team that's really committed to running the football, you have to be disciplined from a play-action standpoint. They get guys open and create one-on-one's. Their offensive line is as good as we've seen. Bunch of veterans. Four starters back. They flip their guys, which is not something you see a lot. They will flip them - left tackle and left guard will go to right tackle and right guard. Big, strong physical guys. Tight end is very athletic. He can run and has good size. They involve him a lot in the passing game.

“Receivers are very talented. Quick had an excellent year last year. Great returner too. The big question is whether or not Parker is going to be back. Guy has 28 touchdowns in his career and 12 last year. He's a great wide out. Sounds like he's going to play. He's a big-time weapon who they have not had at this point.”

On the status of the offensive line

“We don't have enough time. We are Chinese fire drill. We talked about it as a staff Sunday. The neat part of it is they have forced us out of a comfort zone as a coaching staff. This is by far the most versatility we've had in the offensive line. Kalon Davis

Kalon Davis
RS Sr. Offensive Guard
#67 6-5, 340
Chester, SC
View Full Profile is going to make some money. He's playing great and he's played everything. Only thing he hasn't done is snap the football. Guys have taken ownership. They know we have to cross-train. Reid Webster

Reid Webster
RS Sr. Offensive Tackle
#77 6-3, 300
Woodstock, GA
View Full Profile has played everywhere and he's got to be the second center. We have to be creative on how we split our reps in practice. Practice can be a challenge. We are working Tyrone Crowder

Spencer Region
RS Jr. Offensive Guard
#74 6-4, 333
Cullman, AL
View Full Profile some at center. He kind of had a center tryout yesterday. Being creative in practice is the challenge for us. Left tackle we've got Isaiah Battle

Tony Steward
Sr. Linebacker
#7 6-1, 236
Hastings, FL
View Full Profile is day-to-day. Probably more of a mental practice. We are hopeful he will be ready to go on Saturday. Speaking of Tony, he probably played his best game on Saturday. And Charone - they re-evaluated him. We are hopeful. His ligaments are great. We did another MRI, he's got some kind of fluid around there. It's something that's common. They think it's being triggered by something that doesn't have anything to do with his knee. It's kind of like C.J. Spiller

C.J. Spiller
Pro Running Back
#28 5-11, 195
Lake Butler, FL
View Full Profile . We had to maintain Spiller his senior year. Hopefully it doesn't get inflamed again. And Joe Gore- he's progressing well. Back in meetings. I'm going to wait until Sunday to see where he is at he end of the week. We hope it's sooner rather than later. Ben Boulware

Tyshon Dye
RS Fr. Running Back
#23 5-11, 214
Elberton, GA
View Full Profile was back in practice yesterday. We are going to keep him green. He's doing ball-handling. It was good to see him out there too.”

“Well he's responded. I was disappointed with him in camp. Lazy with his opportunity. Not a real sense of urgency. Last year that was there because Martavis Bryant

Martavis Bryant
Wide Receiver (2011 - 2013)
#1 6-5, 200
Calhoun Falls, SC
View Full Profile was here. Mike was tremendous. So we came into things expecting him to be great. I didn't see it in fall camp. And he knows. He was coached really hard during fall camp. Then we shifted Charone Peake

Charone Peake
RS Jr. Wide Receiver
#19 6-3, 204
Moore, SC
View Full Profile over there because he can play anywhere and then he started to get better. He started to respond. We sat down and had a few conversations and then the light started to come on and now we've all seen the results.”

"I don't deal in hypotheticals. All I can say is I am happy that he is doing well. I really am. There is not a bigger fan of Chad Kelly than me. I want him to have great success. I hate that it didn't work out here. We recruited him here to be a great player here. I'm really happy that he is doing well. Hopefully he will continue to do that. There is no question about his ability to be a great quarterback. So I'm pleased that he is having a good season and picked himself up and moved forward. I'm sure he will land at a great spot in January and hopefully have a great couple of years to finish his career and go play on the next level because he has the ability to do all those things."