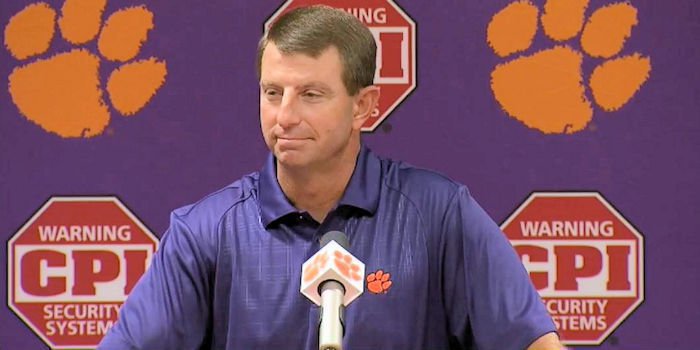 Swinney says he's excited about the start of the season

CLEMSON – Clemson head coach Dabo Swinney is just as excited as the fans to start the season, maybe even more so.

Fifth-ranked Clemson opens the 2017 regular season at 12:02 Saturday in Death Valley against Kent St., and Swinney said he’s ready for some football.

“It’s finally here. I know everybody is excited to get back to football. I’ve never been so excited to see Portland St. in my life,” Swinney said during the season’s first Tuesday press conference at the new Reeves football complex. “It’s here. I was so excited to see some college football and some high school football. It’s game week, and there is nothing better. I am excited to kick it off and see us play and see what the identity of this team is going to be.”

The Tigers are healthy entering the opener.

“Richard Yeargin is out for the year. He's a really big loss for us,” Swinney said. “Y'all are well aware of that. Garrett Williams will definitely be out this week, but he's really making great progress. I think he'll be back sooner than later, so we're excited about where he is in his rehab. Probably right now, Denzel Johnson is doubtful for this week. I think he'll definitely be ready to go next week. He had a pectoral injury so he's been out the last week or so. He's the only other guy that I would say is doubtful for this game. I'll check back and see where he is from a progress standpoint, but right now I'd call him doubtful for sure.”

Kent St. finished 3-9 last season and will be without head coach Paul Haynes, who is on a medical leave of absence.

Swinney says he's excited about the start of the season"

“Turning the page to Kent State and getting back going with an opponent. Our thoughts and prayers are with their coach,” Swinney said. “I know this will be a highly motivated team to come and play at Clemson, to represent their coach and put their best foot forward. When you look at this team, offensively they had some injuries last year, especially at quarterback. They ended up moving a receiver over there and he's as tough a kid as you're going to see - really, really tough football player. He really made a difference for them and played well down the stretch.

“He's a guy that they're going to put the ball in his hands - a lot of zone-read principles, a lot of empty packages, a lot of jet sweeps and motions. They want to get the ball on the perimeter. We've got to do a great job of setting the edge because they've got some speed. The receivers can run. The running back is an impressive player... They've got a very dynamic guy in the backfield, so they go empty a lot and he catches a lot of passes. He led them in receptions last year. They have junior college transfer in there at wideout, and we don't know a whole lot about him. A lot of option principles. It's a big challenge for us just to play with discipline.”

“In openers, you've got to know your system and you've got to be able to apply it to what you see on gameday because it's not like you've got three or four tapes to study of this year's team to see the identity of who they are and really study their personnel because there are a lot of changes. It's critical for us to really have ownership of what we do and be able to apply it to what we see. We present a million things in practice and I think our guys are prepared to go play and then we've got to make adjustments. Openers are always a game of adjustments.”

“Looking at their defense, this is one of the better secondaries we'll play all year, to be quite honest with you. They've got a bunch of guys in the secondary. They've got a couple of them that will probably play on Sunday. Really, really confident. They play to their strengths - a lot of man coverage. I expect them to pressure us a ton, especially with a new quarterback. I expect to see a ton of pressure to check the oil at Clemson and see if we can handle it.”

Every game is big

“They're all big. We get 12 opportunities and that's all we're guaranteed. Everything after that, you earn it and this is just one of 12. We're going to put everything we've got into trying to get off to a good start and achieve our first goal. We've got five goals, they never change and as many of them as we can hit, the better the year we have. We've had years around here where we've hit two-out-of-five, three-out-of-five and I've always said if we hit them all, we'll win it all and that's what we did last year. This is an opportunity to get that first goal under our belt and win the opener and create some good momentum in our season.”

What do you want to see out of Kelly Bryant?

Swinney asked was he surprised that true freshman Logan Rudolph has passed Kelly on the depth chart.

“I don't think that's accurate. I think Logan is the second team guy right now. Logan (Rudolph) is a heck of a football player. It's not a knock on Xavier (Kelly). That's the bad part of recruiting. If the guy isn't some phenom as a true freshman or a redshirt freshman, what's wrong? There's something wrong. Vic Beasley didn't start a game here until his fourth year. There's nothing wrong. He's a freshman and he hasn't played a game. We've got good players. How about give Logan some credit. The kid came in, worked his butt off and earned that spot right now. We've got a long season and all of those guys will have an opportunity to play, but he's proven to be the most dependable guy right now as the second team guy.”

“He's trying to play through it and has demonstrated that he can. At some point, he's going to have to have it cleaned up. Hopefully, he doesn't have any setbacks, but right now he's performing well for us.”

“He's back. He missed a lot of camp with that groin. It depends on right now what the personnel is whether or not he starts the first play or not. I think we make way too much out of that, too, especially with corner.”

“We've got several guys we'd like to see throughout the course of the season. Hopefully, we don't get many opportunities. About one a game would be great. We've got some really good skill. We've worked hard on that and we think we've got some guys that are ready. They just need some opportunity. Cornell Powell is one of those guys and he did a great job for us in the spring. We think he's got a knack for it. He certainly did in high school. We've got several guys - Tavien Feaster, Cornell, Amari Rodgers, Travie Etienne, C.J. Fuller, Deon Cain, Mark Fields.

“Right now at punt return, it's Ray-Ray McCloud, Hunter Renfrow and Amari Rodgers. Amir Trapp is another guy that has a knack for it. Ray-Ray has worked really hard. I don't think he brought the right mindset to it last year. He's a great athlete, and he took that for granted just a little bit as far as how hard it is. That's a really hard job, and he lost his confidence and we ended up making a change. He could be as good as we've ever seen and as good as anybody in the country if he'll be a consistent guy for us. You've got possess the ball for us, that's number one.”

“I don't know. He's prepared to. He definitely could go do it and I think do it at a high level.”