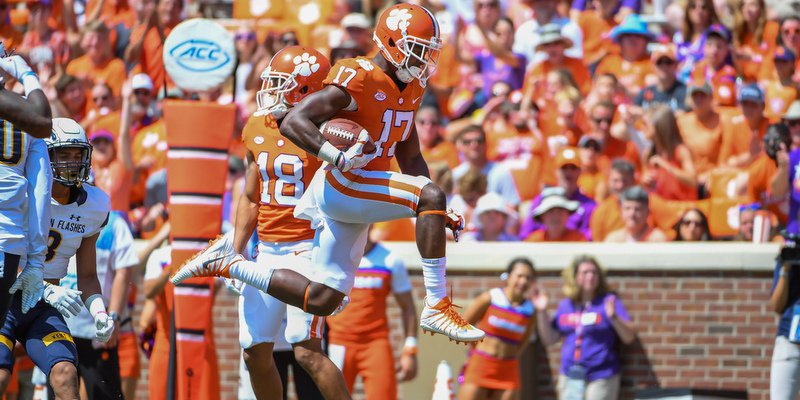 Kelly Bryant was the offensive player of the game

Fifth-ranked Clemson leaves the weekend with a healthy roster and a healthy respect for next weekend’s opponent.

Clemson handled Kent St. 56-3 in the season opener Saturday in Death Valley, and will host No. 12 Auburn at 7 p.m. next weekend. The SEC Tigers handled Georgia Southern 41-7 Saturday, limiting the Eagles to just 78 total yards.

“The tape was just what I hoped it what be, kind of what I saw on the field yesterday. I was really pleased with how the guys played yesterday,” head coach Dabo Swinney said on his weekly conference call. “They played very well, very focused, ready to go, complemented each other well as a team. To play that many guys - it's always great for your morale - and still play a clean game is something I'm really pleased with. It's one of the things I talked about last year, we didn't start very well. Even though we won, we didn't complement each other well. We were a little sloppy, so it was good to see us play a clean game and get a lot of guys some good, valuable experience and hopefully, it will help us to grow our team a little bit as we move forward. Overall, really pleased.”

The offense gained 665 total yards while the defense limited Kent St. to 120. 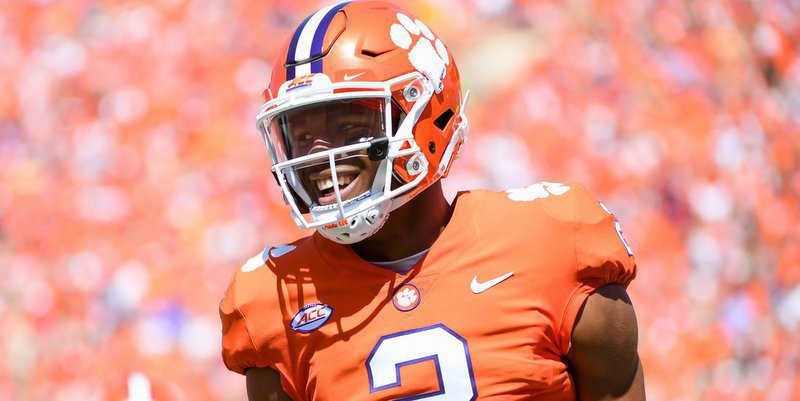 Kelly Bryant was the offensive player of the game "

“Offensively, the balance. I thought our offensive line played outstanding. No sacks. Anytime you can rush the ball for that type of production and the pass production with no sacks, you're getting it done up front. We played 14 guys up front,” Swinney said. “I thought all of our running backs were very productive. Good to see Milan Richard get off to a good start. The receivers caught the ball well. We had 15 guys catch a pass. Good job on third down. Offensively, we had three touchdown drives of 80-plus yards with a lot of our substitutes in the game. It's good to see guys continue to play well and that's a sign of guys getting ready and buying into what we're asking them to do.

“Defensively, really disruptive up front. Just really couldn't get into any type of rhythm all day. Great job on third down. They didn't really try to throw the ball a whole lot. With the different things they were doing, I was really pleased with how our guys made some adjustments and settled in and identified their plan because it was different from what we expected. Played a clean game. Special teams were impressive, all phases of special teams. It was good to see us get off to get to a good start there. We did what we needed to do to get the win. I'm excited about another week this week. I know it's going to be a much bigger challenge taking on Auburn, but I look forward to seeing where we are this next weekend.”

The Tigers are flying high after a week one win

Health of the team

“I thought Ray-Ray did a nice job and had two good nice returns. If you get the ball in his hands, he can do something with it. Good start.”

Robinson back for Auburn

*Defensive tackle Jabril Robinson was suspended for the opener, but will return to practice tomorrow and will play against Auburn.

“It's week-to-week. You've got to earn it every week. We've got a bunch of guys that can play up front. He and Pollard have battled and if you go back and watch the game, we had guy everywhere. We played 14 linemen. Anchrum played right tackle and left tackle. They played about the same snaps - Anchurm played 35 and Pollard played 33 - but both of them graded really well. Really pleased with that competition. It's one of those game-time decisions every week depending on how they practice.”

The play of Tre Lamar at MLB

“He did okay. He did fine. There was a lot going on - a lot of different presentation in that backfield, which was different. We had studied some of their diamond stuff but didn't think they would feature things like that did, so that was a little different for him. A lot of moving parts. He did fine.”

“It was special. I told him I appreciated him giving me two seconds there to be dad before he ran on by me. That was really neat. It's been a dream of his to come to school here and play here and to run down that hill. To have that moment was pretty special. I was proud of him.”

“He's just playing through it, but he's fine. He was our entrenching award winner. He played well. He got a little high a couple of times, but he did a nice job. Sometimes those guys want to do too much and they all want to make the play, but sometimes you make the play by playing your gap so the other guy can make the play. He did a good job. He's practiced well. It's just part of him coming back.”