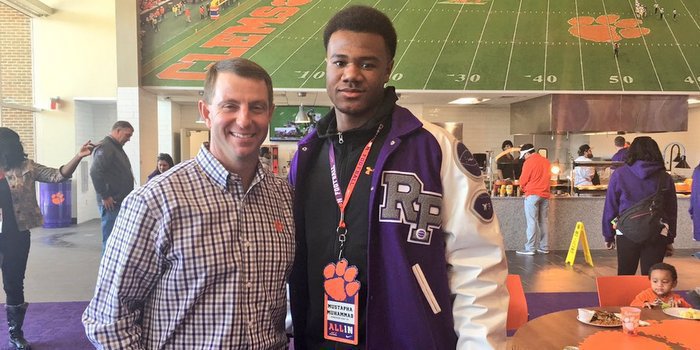 Clemson is still strong for this Texas tight end

Clemson coaches came off the road for a few days earlier this week, but that doesn’t mean things have slowed down on the recruiting front.

We will get right to it.

He is scheduled to camp at South Carolina in early June, and told TigerNet he hopes to be at Clemson for head coach Dabo Swinney’s camp on June 12th.

“It was amazing to receive an offer from Clemson,” Tarquin said. “I really love Clemson, and started developing a relationship with offensive line coach Robbie Caldwell last June.”

A 2018 offer also went out last week, this one to Nick Petit-Frere of Tampa (FL) Berkeley Prep. The 4-star has offers from around the country and it will be interesting to see if Clemson gains traction.

Upshaw is the brother of Clemson walk-on linebacker Regan Upshaw Jr. and son of former NFL end Regan Sr. He picked up a Clemson offer last week, and said a full scholarship from the beginning depended on if Clemson opened up another spot in the 2018 class. There is a chance he could defer to a grayshirt opportunity.

Interestingly enough, Clemson and Auburn haven’t offered. Clemson is holding onto its offers for 2018 running backs, perhaps waiting to see what 5-star back Zamir White decides in June.

Muhammad received an offer from Clemson in April 2016 and attended the Tigers’ elite junior day in January. He is the top-ranked tight end nationally by ESPN, and his interest in Clemson is serious enough that he visited a few months ago.

He is also good friends with the top-ranked quarterback in the country, who also happens to be a Clemson commit.

*One running back that made news last week was Bainbridge (GA) 4-star Dameon Pierce, who decommitted from Alabama. Pierce has a multitude of offers, including Florida, Florida St. and Louisville.

Pierce was Alabama’s first commit of the 2018 class, but I’ve heard that Florida is pursuing Pierce the hardest. I also tested the waters to see if Clemson would have interest, but I’ve been told no.

*Summerville (SC) Cane Bay athlete R.J. Roderick continues to draw interest from around the region. He picked up an offer from UNC last week, and Duke, Georgia Tech, N.C. State and Wake Forest have also offered him this month following South Carolina’s offer in April.

*Clemson commitments Josh Belk, Mike Jones, Derion Kendrick, Trevor Lawrence, Justin Mascoll, Xavier Thomas and Jake Venables are among the players nominated to the U.S. Army All-American Bowl. One hundred players will be selected to compete in the prestigious all-star game, which will take place in January in San Antonio. Kendrick, Lawrence, Mascoll and Thomas have all committed to play in the game.