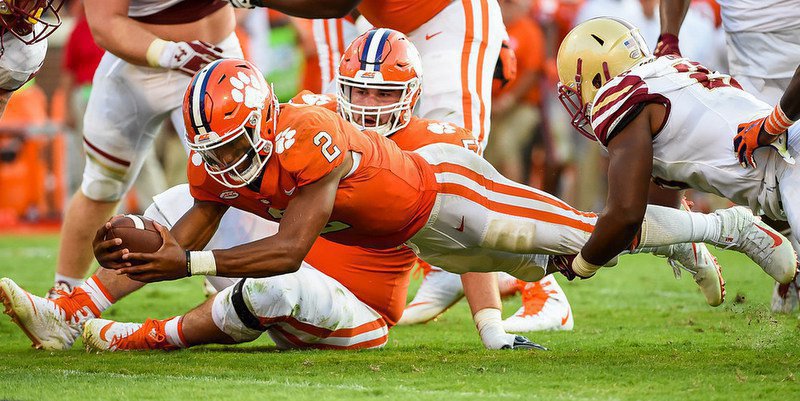 CLEMSON – Clemson held its last full scrimmage of fall camp Thursday morning inside Death Valley. It was a scrimmage dominated by both first-team units.

Here are few quick hits from today’s scrimmage inside Death Valley and we’ll have more details throughout the afternoon.

However, co-offensive coordinator Tony Elliott was quick to also mention redshirt freshman Chase Brice. Elliott said there have been many times that Brice has ‘won the day’ after the coaches have gone back and graded the film.

*Swinney said the first-team defense didn’t allow a score. The first-team units didn’t face each other during the scrimmage.

*Injury update: Linebacker Jamie Skalski – who has been limited in practice after having foot surgery – should be in green when the team practices next. Wide receiver Trevion Thompson – who suffered an undisclosed injury during last weekend’s stadium scrimmage – should return on Monday. Freshman defensive back Mario Goodrich – who missed the last couple of days of practice – was back on the field today.

*Swinney was asked about which freshmen have surprised him and he said defensive end Justin Mascoll, who has jumped right in and made a statement, which is surprising because the Georgia native didn’t arrive on campus until June.

The other two freshmen defensive ends – Xavier Thomas and K.J. Henry – are exactly as advertised. Swinney said Thomas "is a blur" and that Henry has benefitted from added muscle and weight.

*According to Swinney, linebacker Shaq Smith has really come on this fall and is the best he’s been since he’s been at Clemson.

*Swinney said he hates neutral site games and is pleased with Clemson’s upcoming series against LSU. He continued by saying that he doesn’t mind a neutral site game as long as it’s considered a road game, so as to not lose one of the home games. Clemson only gets seven home games a year and Swinney said it means too much to the local economy and the city of Clemson to take a home game away.

As for LSU, Swinney said, “I hope I’m still here.” He then mentioned that he’s been to LSU several times and the bus ride in is always, ‘Interesting.’