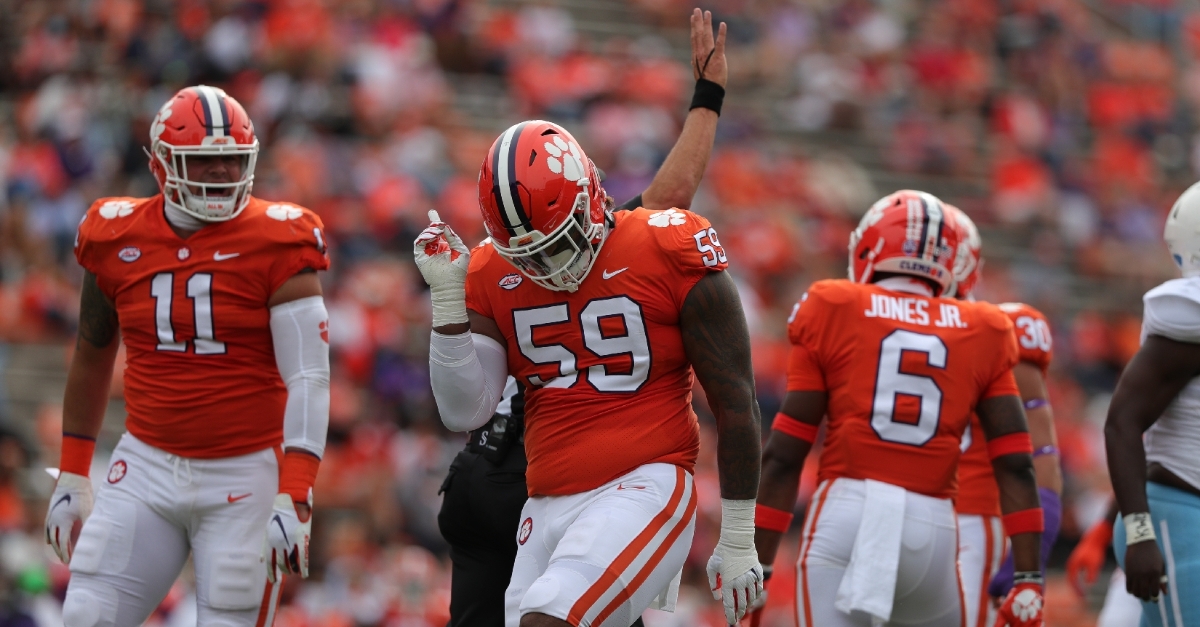 Clemson's defense got it done Saturday.

CLEMSON – The first half told the story.

Clemson scored on its first seven drives and then failed to dent the scoreboard after that, but held The Citadel off the scoreboard in a 49-0 victory Saturday in Death Valley.

Clemson starts the season 2-0 while The Citadel falls to 0-2.

Quarterback Trevor Lawrence was 8-9 for 168 yards and three touchdown passes and also rushed for another touchdown, while starting running back Travis Etienne had just eight carries for 68 yards in very limited action.

OFFENSIVE PLAYER OF THE GAME: Lawrence would be the easy answer here, but we are going to give it to wide receiver Frank Ladson. Ladson caught three passes for 87 yards, including two for touchdowns. He caught scoring passes of 17 yards and 54 yards from Lawrence in easily the best performance of his young career.

DEFENSIVE PLAYER OF THE GAME: Jake Venables led the Tigers with five tackles, but we are going to give it to linebacker James Skalski, who scooped up a Bulldog fumble and scored from 17 yards out, the first touchdown of his stellar Clemson career. Honorable mention to Myles Murphy, who is already a “cheat code” at defensive end.

STAT OF THE GAME: The Tigers ran just 60 plays (to 59 for the Bulldogs) and achieved just 16 first downs, a far cry from the regular numbers we are used to seeing. The Citadel also held the ball for nine more minutes (34:32 to 25:28). -- Nikki Hood

Clemson QBs accounted for six of the seven touchdowns in a 49-0 run in the first half, where Lawrence was on target again passing and scored another TD on the ground.

Travis Etienne did what Travis Etienne does and moved the ball with an 8.5 yards per carry average in eight attempts. More from a loaded Tiger backfield got in the action as well again an overmatched Bulldogs front in the late-going, with a Michel Dukes fumble among the missteps.

Three targets -- three catches, for Ladson, who hauled in two touchdowns and 87 yards over the first half to state his case for the next one to watch from ‘WRU.’ Amari Rodgers shook off an early drop to bring in a 44-yard TD as well.

Clemson’s QBs had all day as the Tigers mounted score after score in the first half, but you’d expect a few more yards on the ground even with backups in against a depleted FCS team.

Absolutely dominant with ultra-impressive efforts against from freshman 5-stars in Myles Murphy and Bryan Bresee.

Skalski got in on the scoring and his group at the second level was all over The Citadel’s backfield to blow up plays.

The only real blight on the day before backups came out in force was Derion Kendrick drawing an unsportsmanlike flag that preceded a pass that put the Bulldogs across the 50 for the first time late in the first half. Clemson held the line after that play, however.

Clemson was able to put another scary sight on video with Etienne gliding down the field on a 44-yard punt return. Well-rested most of the game, Will Spiers fired off a 53-yard punt in the second half too, landing two inside the 20 over the game in three attempts. -- Brandon Rink