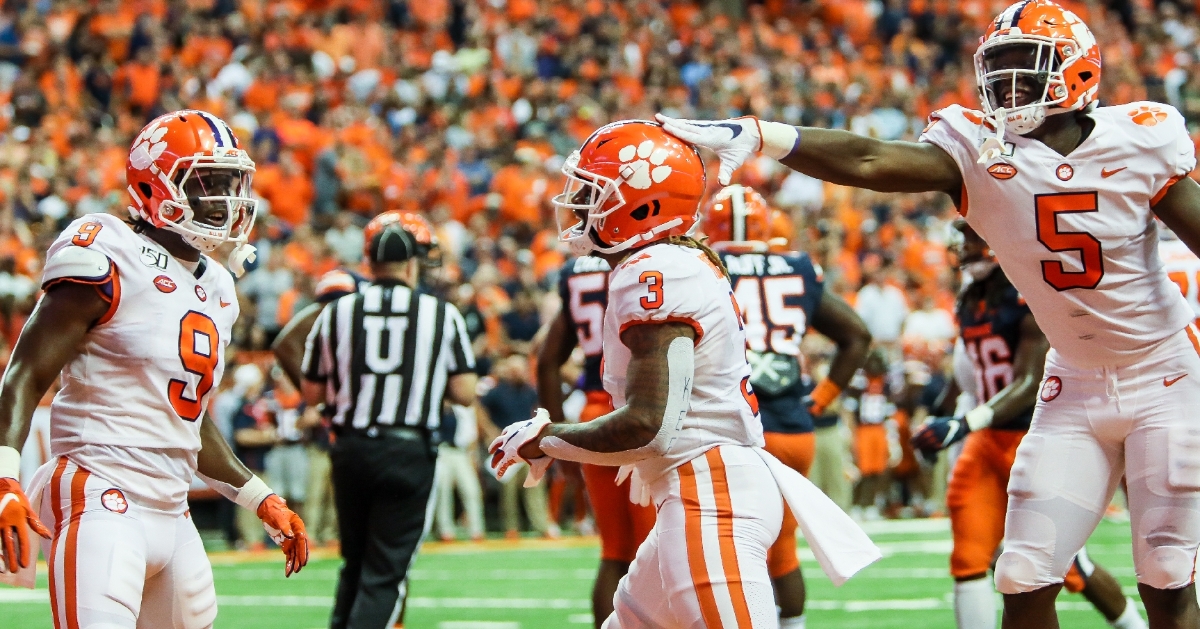 CLEMSON – A work in progress.

Clemson is ranked number one nationally and has fashioned a 3-0 record as the only school to defeat three Power Five teams in the season’s first three weeks, but during Monday’s interview session both players and coaches had the same message – this team is a work in progress and far from a finished product.

Center Sean Pollard said the team does a great job of not listening to any of the outside noise or criticism.

“We are a very small senior group, but we’ve been there. And this freshman class is the easiest freshman class I’ve ever been around,” Pollard said. “They’ve all bought in.”

*Safety Tanner Muse was asked if this year’s defense is faster than last year’s defense, and he smiled and said maybe they play faster because of all the veterans in the back end. He then took a good-natured dig at teammate Nolan Turner.

“We can’t be faster, because Nolan is out there.”

Muse said that Isaiah Simmons might just be the best defensive player in the country right now, saying he not only has all of the physical tools to be dominant but he has learned to play the game.

Last year’s front four was known as the Power Rangers, and Muse said the secondary is known as the No Fly Zone, a name that corners coach Mike Reed has had for his group for a long time. Muse said he has a No Fly Zone t-shirt and will wear it to the next round of interviews.

*Co-offensive coordinator Jeff Scott said the coaches have no concerns about quarterback Trevor Lawrence, saying it’s not feasible to expect Lawrence to be as good in game three this season as he was in games 14 and 15 a year ago. However, Scott said the offense is a work in progress and will be a work in progress in game seven and game ten and game 12 and that once you’re satisfied with where you are you stop growing.

Scott said the second interception that Lawrence threw was just a bad decision, saying Lawrence has been able to throw into tight windows and has to realize that you can’t always do that. He said Lawrence should have thrown to Diondre Overton, who was wide open on the sidelines.

Scott does like what he sees out of the offense.

“I feel like we are ahead offensively of where we were at this time last year. Just going back and looking at everything, I love our balance,” Scott said. “I hope we can keep that up. And I am pleased with our explosive plays through three games. But with that said, we are still leaving some plays. I think that is even more encouragement for our guys. And we need to be more efficient on third down and eliminate the turnovers. But the quality of a good team is how you improve every week and I think we are doing that.

“I think Trevor is doing a great job. He has made a few bad decisions but he will grow from that.”

Looking ahead to Charlotte – Scott said the 49ers remind him of when the Tigers played Appalachian State a few years ago. Very athletic defensively.

“That is why I came here, honestly, who is a mastermind at what he's doing,” Skalski said. “You look at the plan you put in place and how it all came together and it just works out really nice. He is always looking at ways to attack an offense, and it might be on the fly. You have to trust what he is doing, and since I've been here it's worked out pretty well.”

*Lawrence said he loves the spirited competition during practice against Venables’ defense, and while the defense lacks a true trash talker like Christian Wilkins or Clelin Ferrell, Muse helps pick up the slack in that department.

“We have done some good things, but we have a long way to go,” he said. “You look at our first three games and we had Georgia Tech making the move from the option to the spread and then Syracuse moving to a new quarterback, so there have been some extenuating circumstances.”