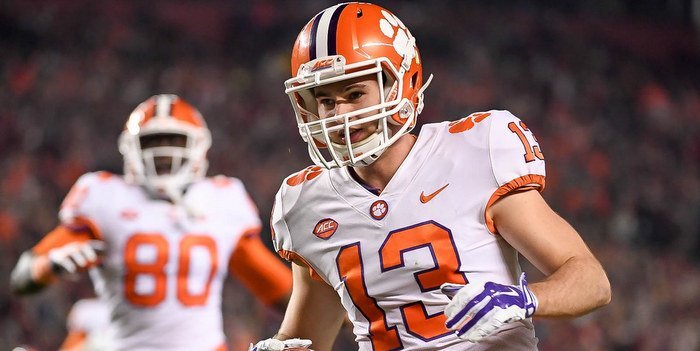 COLUMBIA, SC – There was a lot of talk about revenge and disrespect and playing with emotion but at the end of the day, none of that mattered.

The better team usually wins and Saturday night the better team won as Clemson (11-1) beat South Carolina (8-4) in front of a sold-out crowd at Williams-Brice Stadium.

OFFENSIVE PLAYER OF THE GAME:For all of the grief and negativity quarterback Kelly Bryant has endured over the last few weeks for his inconsistent play, he more than answered the bell Saturday night. The only negative was the interception that led to the touchdown in the fourth quarter, but other than that he was steady and made plays all night. Bryant finished the night completing 24-of-32 passes for 272 yards, two touchdowns and the interception. He added 26 yards on the ground.

DEFENSIVE PLAYER OF THE GAME:Clemson’s entire first-team defense deserves the player of the game honor. The first team gave up just three points through three-and-a-half quarters. Kendall Joseph led all tacklers with five tackles. The defense had five tackles for loss, one sack and two interceptions (one for a touchdown). South Carolina’s offense gained just 207 total yards on 54 plays – 80 of which came on the final drive in the fourth quarter.

Pick six:After a great punt by Will Spiers that pinned the Gamecocks at their own one-yard line, Ryan Carter put the Tigers on the board. Gamecock quarterback Jake Bentley and wide receiver Bryan Edwards weren’t on the same page as Carter picked off pass and walked 12-yards into the end zone, giving Clemson a non-offensive touchdown in every road game this season.

Unsportsmanlike Conduct:South Carolina’s student section was raucous beginning early in pre-game warmups throwing things on the field on the field and yelling obscenitites at Clemson coaches and players. While it didn’t affect the outcome of the game, after Clemson head coach Dabo Swinney received an unsportsmanlike conduct penalty from the officials, it seemed like the officials in the stands got better control of the crowd…until the team left for halftime.

Etienne bids adieu to Gamecock crowd:Late in the third quarter, Clemson’s drive stalled and the Tigers were going to be forced to punt but an unsportsmanlike penalty on the Gamecocks kept the drive alive. Freshman running back Travis Etienne made them pay with a five-yard touchdown run to make it 34-0. Etienne finished the game with nine rushes for 41 yards.

Just for fun:When the Gamecocks kicked a field goal with 13:21 left in the game, the small crowd still left in Williams-Brice cheered loudly and fireworks were shot off above the scoreboard.

STAT OF THE GAME:In the last eight quarters between Clemson and South Carolina, the Tigers have outscored the Gamecocks 90-17.

UP NEXT:Clemson will face Miami in the ACC Championship Game in Bank of America Stadium Saturday night at 8 p.m.