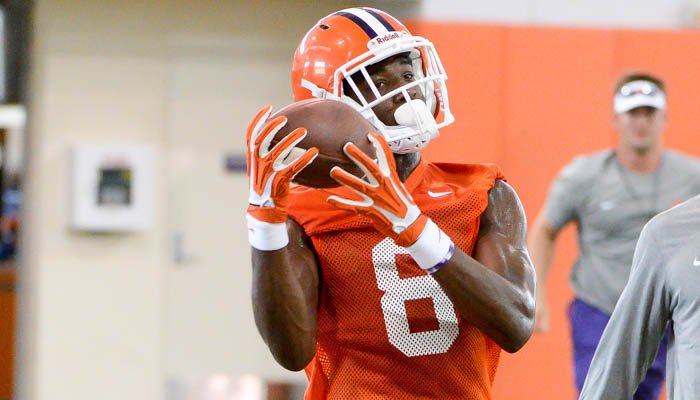 CLEMSON – One of the biggest scrimmages in fall camp waits for the Clemson football team Saturday in Death Valley, and Friday’s morning practice at Jervey Meadows concentrated on special teams and goal line work.

The Tigers practiced for two hours beyond the centerfield fence of Doug Kingsmore Stadium Friday morning.

“It was a really good, tough practice today. Very fast paced. Kind of continuing to cover some of our situations that we need to get done,” head coach Dabo Swinney

Dabo Swinney
Head Coach
View Full Profile said. “We did a good bit of special teams and got into some of our tight punt stuff today and kickoff coverage. We've got a little more work at that. We'll do some live stuff during the scrimmage tomorrow. We've had a good couple of days special teams wise.

“We worked a good bit coming off of the goal line today. Guys have really pushed through well. This is the dog days of camp. Yesterday we had a short walk through on the field - not a physical day. It was kind of a day to catch their breaths physically, but we really strained them mentally with a lot of meetings, walk through and we took them to a movie last night. Today was a good, tough practice.”

The football team gets the afternoon off, and that includes a day at the lake.

“We're going to all have a team outing this afternoon and go play on the lake and have fun as a team,” Swinney said. “We'll come back tonight and make some corrections on this practice and go over some final details getting ready for the scrimmage tomorrow. Tomorrow is a big day. We had a scrimmage on Wednesday but it was controlled, and we made sure we got all of situational work done and covered. We're ready to play and cut them loose and react to whatever situation arises in the scrimmage. I'm anxious to see a bunch of guys.”

“Injury wise, we're getting a few guys back. It was really a tough break for us losing Korrin (Wiggins) but that's ball and we've got to have guys ready to go. It's a blessing getting (Travis) Blanks back at that positions. He and Dorian O’Daniel and T.J. (Burrell) will fill the void there. Other than that, everybody is in pretty decent shape and hopefully we'll come through tomorrow okay as well. Kendall Joseph

Who will avoid a redshirt

“Probably Thursday of next week is when we will know. We've got a scrimmage tomorrow and we've got two big practice days Monday and Tuesday. Wednesday will be a day off as they start school. Thursday is another big scrimmage. Thursday is when we'll start getting zeroed in on who's going to definitely play, who's on the bubble, and who we want to definitely redshirt if possible. All of those things can change in a practice with injuries. We'll get dialed in, on that and that's how we'll go into that next two weeks of Wofford prep. We'll take Friday and Saturday to do some season work. We've got some you know you're going to play. Ray-Ray (McCloud) and Deon (Cain) are definitely going to play. There's no question about that. (Jake) Fruhmorgen has got to play. (Mitch) Hyatt has got to play. There are other guys who are in the mix. Jalen Williams

“We can win with Nick. He's done a nice job. He really took that step that we needed back in the spring and he hasn't disappointed in camp. He's fast. He can run. He's got good quickness. He's very accurate.”

“Same as the other day. Tomorrow is a big day for those guys. We're going to do a good amount of kickoff. We really want to see the kickers. We'll have a good amount of field goals worked in. (Andy) Teasdall is definitely our punter. I'm really pleased with him. We like where (Hunter) Renfrow is right now. Jim Brown

Jim Brown
RS Sr. Long Snapper
#76 6-4, 230
Walterboro, SC
View Full Profile has done an excellent job snapping for us. Seth (Ryan) has done a great job holding. We feel good about most of the pieces but I feel really good about what I see from a return standpoint. We have some electric guys that I think are going to make some plays for us.”

“Those three guys have gotten the majority of the work, but little Adrien Dunn

Adrien Dunn
RS So. Wide Receiver
#82 5-7, 170
Clemson, SC
View Full Profile has gotten some work, too. That's a pretty good niche for him. He's a shifty guy. But Artavis, Ray-Ray and Hop all have the ability to be special at that spot. And they've competed. From a consistency standpoint and handling the ball I've been pleased with them.”

“We stressed them today and did a good bit of live work. We went inside, skelly, team pass, all good on good and then we did what we call a rapid-fire drill. It's a little unrealistic, but it's meant to be that way. We go as fast as we can possibly go. I'm spotting the ball, and the defense has to go three plays quick and with the offense it's just one play after another. It's a really difficult drill, and I thought they did well. And then we spotted the ball at the minus one and did a drill where we come live off the goal line. I thought we did well. I think we're in great shape.”