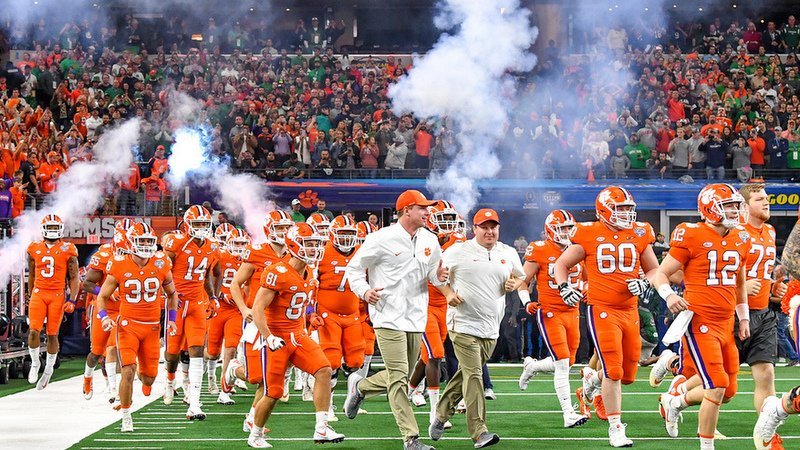 Welcome to one of the best weeks of the year.

Since the Tigers were crowned National Champions on a chilly night in Santa Clara in early January, we’ve managed to bide our time and wait for the next opportunity to see the Tigers take the field. Heck, it’s only spring practice, but it’s football, and that’s a good thing. What makes it even better is the fact that it coincides with some other notable games and events this week.

Clemson baseball plays host to East Tennessee State Tuesday at Doug Kingsmore, a final tuneup for the Tigers before taking on arch-rival South Carolina this weekend.

Wednesday is the start of spring football practice. For your planning purposes, there won’t be a Dabo Swinney press conference before the start of practice. Instead, the media will get to watch the first 30 minutes of practice and speak with Swinney and chosen players after practice.

That first practice is always a good time to get a look at the news guys. That means a good look at receivers Joseph Ngata and Frank Ladson, talented quarterback Taisun Phommachanh, tight end Jaelyn Lay, punter Aidan Swanson, and a guy that I think Tiger fans are gonna love in safety Ray Thornton.

Clemson will be one of the favorites to return to the College Football Playoff next season, and with good reason. The schedule once again sets up nicely, and the offense will be one of, if not the best, in all of college football. There are questions on the defensive side of the ball, but there is also a ton of talent, and you have to figure that defensive coordinator Brent Venables will have his group ready when the Tigers take on Georgia Tech in the season opener in late August.

He will complain and grit his teeth and complain that no one is paying attention and that he isn’t sure if he can field a competitive unit, and then they’ll be one of the top groups in the country again next season. It’s one of the rites of spring that we love and are used to.

We will be watching the defensive tackles this spring – a lack of healthy bodies there is cause for concern. Will someone have to play on both the Orange and White teams in the spring game?

Clemson basketball continues to chase a berth in the NCAA Tournament, and they travel to Pitt Wednesday night. CBA bracketologist has Clemson as one of the first four out, but all of the experts say there is a “weak bubble” this season. If the Tigers can win at Pitt and Notre Dame and split the home games against North Carolina or Syracuse, the tourney is a real possibility.

Speaking of North Carolina – they come calling at 6 pm Saturday, and they are peaking at the right time. The Tar Heels are dangerous.

Women’s basketball is up next on Thursday when Clemson travels to Duke in the regular season finale. Amanda Butler’s first Clemson team went on to earn a 73-66 victory against Virginia Tech Sunday, allowing the Tigers to clinch a winning record in ACC play for the first time since the 2001-02 season. Clemson (18-10, 9-6) finishes off the regular season Thursday night at Duke and is in position to earn its first NCAA Tournament berth since 2002.

Friday morning brings us the start of on-field workouts at the NFL Scouting Combine in Indianapolis. There will be four days of workouts lasting until Monday, March 4.

Clemson’s 11 invitees were the most in the Atlantic Coast Conference and tied with national runner-up Alabama for the most in the nation. Ohio State will have ten representatives while Georgia, Mississippi, and Washington each have nine.

The football team will also practice Friday afternoon, and we are supposed to speak with the coordinators for the first time this spring after that practice.

Friday evening is the start of the baseball series against the Gamecocks. The Tigers have won the season series four years in a row. The two teams will play Game 1 of the three-game series at Doug Kingsmore Stadium in Clemson at 6 p.m. on Friday, March 1, with Game 2 scheduled for Saturday at Fluor Field in Greenville at 1 p.m. The three-game series will conclude Sunday at Founders Park in Columbia. First pitch is scheduled for 1 p.m. that Sunday.

Saturday morning is the Clemson All Pro Dad Experience, baseball is that afternoon at Fluor Field, and the Tigers host the Heels that evening.