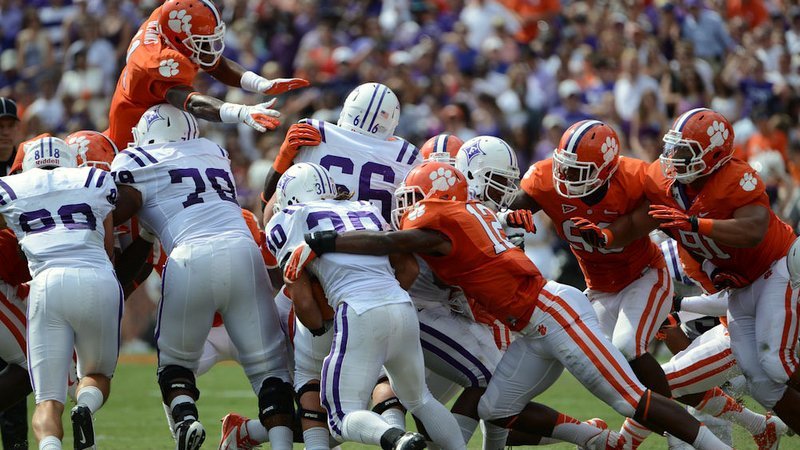 CLEMSON – The Furman Paladins haven’t beaten Clemson since Franklin Delano Roosevelt was in office, but Tiger head coach Dabo Swinney reminded the media Tuesday that the Tigers were probably favored in that 1936 game.

The 123rd season of Clemson football will commence on the afternoon of Saturday, Sept. 1, when the Tigers play host to the Furman Paladins. Kickoff at Memorial Stadium in Clemson is scheduled for 12:20 p.m.

Clemson has won 30 straight games against Furman since a 0-0 tie between the two schools at Furman in 1937. Furman’s last win over Clemson took place in 1936 in a Nov. 26 game played in the snow in Clemson. That contest remains the only time on record that Clemson has played a home game in the snow.

It might be a cold day in you know where – complete with snowflakes – if Furman pulls off the upset Saturday. However, Swinney said the Tigers can’t focus on the opponent.

“We have a standard and it doesn’t change whether you’re playing a 1-AA opponent or an opponent in the national championship. That’s how you develop consistency,” Swinney said. “How we play is based on how we prepare, effort, focus, attention to detail. People say this is a game we should win. Furman has beaten Clemson 10 times. 10. So it’s not like they’ve beaten Clemson once. The skies parted. I don’t know when the last one was, but it has happened. Those ten times, Clemson was probably supposed to win. Supposed to doesn’t get it done. You better show up every week. Openers are always tough. This will be tough for us.”

“They have 10 of 11 starters back on defense who are juniors and seniors. They’re a veteran team with a lot of experience. All of their defensive linemen are back. They have a good group that knows what they’re doing,” Swinney said. “Offensively, to be honest with you it’s stressful to watch them. They do a great job. Shifts and motions, option offense, traditional spread looks, etc. They really stress you and do a great job with their play action game. They can expose you in a heartbeat. They threw the ball 20 times a game last year but averaged 17 yards a catch. It’s built off of their option principles. This will be a challenge. Each opener is tough because you have not played. It’s easy to see why they’ve had the success they’ve had.

“At the end of the day, it’s a special time. The season starts now for a lot of people, especially our fans. For us, it started in January. It’s off-season, it’s mat drills, self-evaluation, spring practice, it’s exit interviews, it’s transformation, summer grind, fall camp … just a lot of boxes that are checked. But it all builds up to this moment. We have 12 opportunities that we’re guaranteed. It’s just exciting to know that it’s finally here.”

Q: How do you expect Feaster to respond?

“He missed a good bit of camp. He had a scope on his knee. He had an awesome summer. Hey, just go play well. They’re going to all play.”

Will the loss of Richard Yeargin affect depth?

“It doesn’t affect our depth. He didn’t practice really all of camp. You hate it. He’s cleared to go but he’s not quite mentally ready. He sees a bigger picture. He’s had to deal with things most people don’t have to go through. We support him and his decision. We have good depth there. We have a lot of guys who will get opportunities to play.”

“He’s second on the depth chart because that’s what he earned. We grade everything. If the grades don’t matter, why do we waste time doing it? It doesn’t matter if you’re a senior or a freshman. It doesn’t matter that Christian Wilkins started last year. He’s continued to earn it this summer. He’s earned it on and off the field. That’s just the way it shook out. Feaster went in at No. 1, but got banged up, missed some time and then Travis Etienne is just so much improved. Adam has just had an awesome camp. And Feaster came on at the end. It’s just where we are right now. We have to line them up somehow. I wasn’t really counting on Lyn-J Dixon coming in. Boy, has he been a pleasant surprise. He’s ahead of Etienne this time last year. He’s got more confidence in what we’re doing. Those guys will all have big moments.”

Is Jackson Carman what you thought he was?

“He wasn’t when he got here. He was - man - 370-ish, but amazing. Athletically, yes, he was. He could still move pretty dang good and his endurance was good, but he couldn’t bend as well. His composition wasn’t very good. He had an unbelievable spring and summer and a great fall camp. He’s very smart. He’s played guard, tackle and that’s unusual. He’s just a mountain of a man. He’s just in such good shape and he’s still a puppy. He’s going to be a monster when coach B (strength and conditioning coach Joey Batson) gets done with him. Yes, where he is right now that’s where I thought he’d be. But he didn’t come in that way. That’s kudos to our strength and conditioning and to his work ethic.”

“He won it. I don’t know how he generates that kind of power with that body. It’s amazing. He just won it. Easy decision. It wasn’t close. Hopefully, he doesn’t shank one right out of the gate. He’s a weapon. He beat out a senior.”

Is there a level that we haven’t seen from Dexter Lawrence?

“Oh man, no question. There’s that in all of those guys. There is a level in Christian Wilkins, Kendall Joseph and Kelly Bryant you haven’t seen. The best is yet to come. There’s a better version of Clemson or Coach Swinney you haven’t seen. I don’t want us to ever feel like we’ve arrived. Everyone has another level. You should get better as you go. He was awesome as a freshman and made all-conference last year but he wasn’t 100-percent. He’s just knowledge. He’s experienced. Those guys came back to improve, with unfinished business.”