The last time we saw Clemson’s offensive line in actual game action, they were paving the way for Deshaun Watson’s record night against Alabama in the National Championship Game. They were good that night, turned heads all of last season, but have a chance to be even better in 2016.

Add in projected starters Taylor Hearn and Jake Fruhmorgen (up to 302 pounds) and the offensive line has a chance to be stellar once again. And nasty. Or, as head coach Dabo Swinney said during the spring, there’s not a lot of baloney with this year’s group.

“Not a lot of baloney going on with those guys,” Swinney said. “They want to be a special group. They understand that they have a great quarterback back there, a bunch of great backs and a bunch of Frisbee-catching dogs on the outside that they’ve got a chance to run (and) chase them chains. If they do their job (their teammates do the rest), and man, they take pride in that.”

“That’s a close group. Robbie (Caldwell) has done a great job. Leadership has emerged. (Center) Jay (Guillermo) is doing a phenomenal job. There’s a lot of pride in that room. Even though (offensive tackles) Mitch (Hyatt) and Fruh (Jake Fruhmorgen) are just sophomores, those are two guys that are very serious about it. They are just some committed guys.” 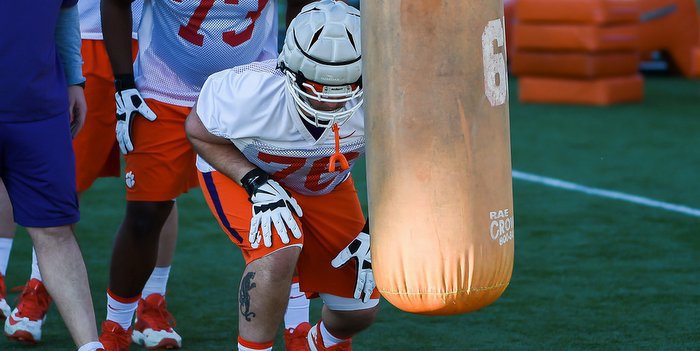 Guillermo said it’s a group that isn’t afraid to work.

“There aren't any people who aren't willing to do work. It's not like it's been a room full of misfits, but two or three guys can take a whole room down, and I don't think we have any guys like that anymore,” Guillermo said. “I think we've got a bunch of guys who will work and work and work. They want to be coached. I think we've had guys in the past that didn't want to be coached or wanted to do it their way, and that's not a problem with this group. They take their coaching, they learn, and they go forward. They don't go backward, and I think that's another big thing with this group.”

The wait between now and the season opener at Auburn will be a long one for Clemson fans, but for Guillermo, the wait will be easy because he doesn’t have to worry about his offensive line teammates, a group he says will be nasty.

“I think it's better than it was when I got here during the summer. This is the best I've felt as an offensive line unit coming out of a spring,” he said “We've just got to tune a few things up. Now we're into fine tuning and transforming our bodies. I'm just really excited about this group. We're going to be really good. We were really good last year, and we lost some good people, but we've just got guys who have played, that know how the game works, and they're mean and nasty. That's what you want in an offensive lineman, and I think that's going to take us to the next level.”

Maverick Morris can play either tackle or guard and will earn valuable snaps this season, as will Justin Falcinelli and Noah Green. Logan Tisch has worked his way into playing time, as has Zach Giella.

“We are really blessed with the guys we’ve got on the offensive line,” Swinney said. “Hearn is starting to come on. Robbie can tell you this - Falcinelli can be as good as we've had come through here. He really has that type of ability. It's a matter of him really making his mind up on some of the little things. He's a brilliant young man but sometimes he's not as focused football-wise as he needs to be. But he’s just going to be a sophomore – he’s a guy that has a chance.”

Freshmen John Simpson and Chandler Reeves should redshirt, but Sean Pollard and Tremayne Anchrum both enrolled in January, took part in spring drills and have a chance to play this season.

“Those two young ones – Pollard and Anchrum – oh yeah,” Swinney said. “Those two right there, boy, I’m glad they are on our team. Both of those young men got bright futures for us. No question about it. They’ve got the right stuff.”