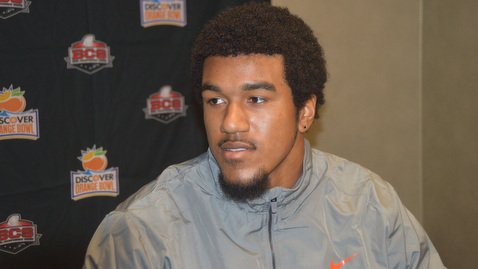 Vic Beasley is just one of the standouts on Clemson's defense

Can the Tigers make it four consecutive seasons of 10 or 11 or even more wins in 2014? Absolutely. The defense should be one of the best that’s been seen around here in a long time, with a monstrous front four that is deep and talented, an All-American caliber linebacker in Tony Steward

Tony Steward
Sr. Linebacker
#7 6-0, 235
Hastings, FL
View Full Profile and a young but talented secondary that will only get better as the season progresses.

Yes, the offense is young and inexperienced in spots, but offensive coordinator Chad Morris

Cole Stoudt
Sr. Quarterback
#18 6-4, 205
Dublin, OH
View Full Profile who doesn’t get too high or too low, the kind of steady hand this offense will need as it endures what could be some early growing pains.

Here are the reasons Clemson can and will win 11 games for a third consecutive season.

*Talent? It’s everywhere, and while this team is young in spots, the youngsters are good. Remember names like MacKensie Alexander

Deshaun Watson
Fr. Quarterback
#4 6-3, 190
Gainesville, GA
View Full Profile – each of those youngsters should make an impact at some point this season.

*Cole Stoudt. Everybody’s favorite player is the backup quarterback, and Clemson will have a pretty good one in Watson, the hyped 5-star wonder out of Gainesville, Ga. Watson can do it all. But he will have to wait his turn, just like Stoudt has waited.

I had one coach tell me that the hallmark of those good Alabama teams over the last six seasons or so has been a great defense coupled with a quarterback who doesn’t lose games – quarterbacks that go out and manage the game and don’t make the kinds of mistakes that lead to a loss. That might indeed be the gameplan for Clemson this season – let the defense do its thing and then let Stoudt and company wear down the opposing defense. Stoudt doesn’t rattle easy, and by all accounts is a student of the game.

If he throws an interception or gets pressure from the outside, don’t expect Stoudt to panic and fall apart. He is easy-going and won’t get too excited whether things or going good or bad. In other words, Stoudt is the perfect quarterback for the 2014 Tigers.

*The defense. The Tigers ranked 24th in points allowed at 22.2 points per game and led the nation in tackles for loss with 123. Except for Spencer Shuey

Vic Beasley
RS Sr. Defensive End
#3 6-3, 225
Adairsville, GA
View Full Profile only has to look down the road to Columbia to understand what happens when expectations and overconfidence collide with reality for a superstar defensive end. However, Beasley has proven in the past that he cares less about Beasley and more about his teammates, and he decided to forego the riches of the NFL for a chance at a senior season. That kind of attitude shows the kind of leadership Beasley – who isn’t the biggest rah-rah guy in the world – provides.

Josh Watson
RS Sr. Defensive Tackle
#91 6-4, 285
Wilmington, DE
View Full Profile , who all have a wealth of experience. Younger players that could make an impact are Shaq Lawson, Ebenezer Ogundeko

The secondary has a veteran hand in Robert Smith

Robert Smith
Sr. Safety
#27 5-10, 210
St. George, SC
View Full Profile , and while Jayron Kearse had his share of great moments followed by some not-so-good moments, he should only be better. The secondary also has a lot of talented youngsters like Alexander, Jadar Johnson

Stephone Anthony
Sr. Linebacker
#42 6-2, 235
Polkton, NC
View Full Profile will be one of the stars on Clemson’s defense, and he will joined by former 5-star recruit Tony Steward. Add in young players like Ben Boulware and Dorian O’Daniel – both players did well during the spring – and Clemson’s linebackers are in a good shape. B.J. Goodson

T.J. Burrell
RS So. Linebacker
#41 5-11, 215
Goose Creek, SC
View Full Profile all have experience and will compete for playing time, so competition isn’t an issue in one of the deepest spots on the roster.

*The schedule. Does the schedule really scare you, beyond Georgia, Florida St. and South Carolina? The Tigers should be favored in the other nine games, and Swinney has done a good job of beating the teams he is supposed to beat. Win those nine, “upset” one of the above three and win a bowl game – the same scenario we’ve seen the last two seasons – and you have the wins needed.

Tomorrow, however, I take a look at the opposite side of the coin. There are issues, and there are holes on this team, holes that could prevent this team from achieving not only 11 wins, but maybe even prevent it from winning 10 games.