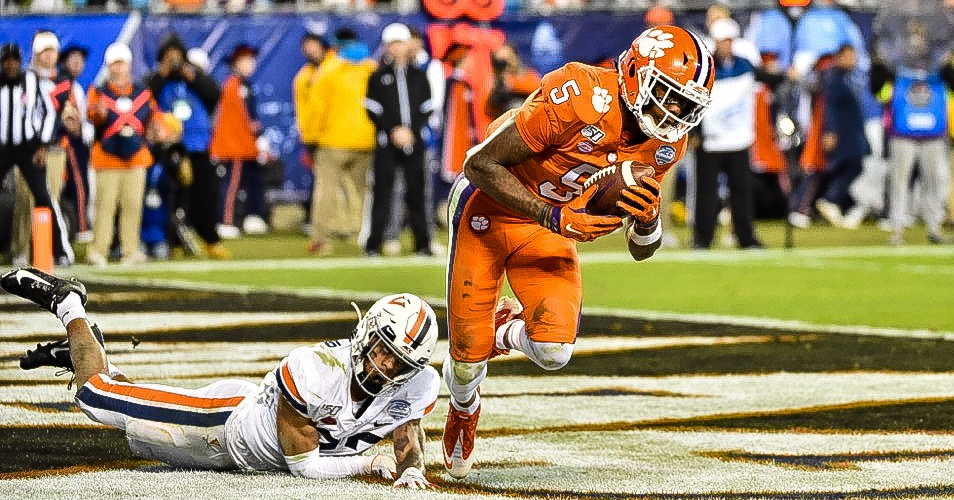 No. 3 Clemson ran over and through No. 23 Virginia Saturday night and Tee Higgins continued his assault on the Tiger record book in a 62-17 victory at Bank of America Stadium in the ACC Championship Game.

Higgins caught nine passes for a championship game record 182 yards and three touchdowns. Trevor Lawrence was done after three quarters and finished the night 16-of-22 for 302 yards and four touchdowns, tying an ACC Championship Game record. Travis Etienne had 14 carries for 114 yards and a score, while Justyn Ross had three receptions for 92 yards.

Clemson and the rest of the nation will watch the College Football Playoff selection show at noon Sunday. The show will announce the unveiling of the four Playoff teams at 12:15 p.m. Each of the New Year's Six bowl game pairings will be revealed at 3 p.m., followed by the remainder of the entire bowl slate. The semifinal sites are the Peach Bowl in Atlanta and the Fiesta Bowl in Phoenix.

The win was the 28th in a row for the Tigers. Clemson is the first team in the conference championship game era to win five consecutive conference championship games. Clemson and Oklahoma are the first programs since 1971-75 Alabama to win five straight outright conference titles. The win was head coach Dabo Swinney’s sixth career ACC title this week, tying Frank Howard’s school record and matching Howard and Duke’s Bill Murray for the second-most in ACC history.

Clemson’s 12-game streak of now allowing an opponent to reach 300 yards of total offense ended as the Cavaliers went over the 300-yard mark late in the third quarter.

"These guys were ready. They were focused, and they were passionate about winning the game," Swinney said. "You know, just super proud of -- we knew they were going to have some unusual things, and we knew this quarterback was not going to be an easy out. He's moved the ball on everybody. We bent a little bit, they had us on our heels a little bit, but we settled in, we created three turnovers, and we played complementary football. Our offense really took it over. I think we scored every time in the first half that we had it."

Swinney gave credit to Virginia for putting together a great offensive game plan.

"They just kind of nickelled and dimed us, and he made plays. He made some plays with his legs," Swinney said of Bryce Perkins. "He made a couple of competitive throws. But we settled in, and eventually had a little run of punts there, which allowed us to really stretch it out because we were playing pretty efficiently on offense. I think we were 10 of 18 on 3rd down. So I think we were 12 of 17 last week and 10 of 18 this week. That's unbelievable. You can win a lot of ballgames when you're having that type of success on 3rd down.

"Man, give them credit. They just did a nice job, again, with their scheme. Had a couple of unusual things, and then it'll be good for us to be honest with you. They put some good stuff on tape. We probably put a few not so good things on tape that will make us better for sure. It was just a dominant performance. I mean, again, plenty of things that we'll see on tape that we can learn from that I think will make us better as we move forward, and I'm thankful for that. But the guys were really focused, really locked in, and excited about the moment."

Virginia picked up a quick first down on the game’s opening drive, and a 46-yard pass put the Cavaliers at the Clemson 13-yard line. Two plays later, however, Virginia quarterback Bryce Perkins overthrew his receiver in the endzone and it was intercepted in the back of the endzone by Nolan Turner.

The Cavaliers responded with another big drive. Perkins led Virginia on a 12-play, 78-yard drive, and his 20-yard post to Hasise Dubois helped the Cavs tie the game at 7-7 with 6:22 left in the first quarter. The touchdown was just the second allowed by Clemson in the first quarter this season (UNC).

Clemson answered quickly. Three run plays earned the Tigers a first down, and then Lawrence hit Justyn Ross on a deep crossing patter than Ross caught in stride and turned into a 59-yard touchdown that was the second-longest passing touchdown in ACC Championship Game history. With 4:46 to play in the first quarter, the Tigers held a 14-7 lead.

The Cavaliers again crossed midfield but were eventually forced to punt. Clemson put together a long drive – aided by a 38-yard Higgins’ reception – and the Tigers settled for a 47-yard field goal from B.T Potter for a 17-7 lead early in the second quarter.

The Tigers forced another Cavalier punt and took over at their own 32. Higgins had the highlight grab on the drive – he caught the ball falling out of bounds but still kept a toe on the ground – but it was Etienne who earned the score. Etienne burst off right tackle and bounced off tacklers on his way to a 26-yard scoring run a 24-7 lead.

Clemson forced another Virginia and then went methodical. The Tigers put together a 12-play, 86-yard drive that took 5:29 off the clock. Lawrence hit Higgins on seven-yarder and the Tigers took ae 31-7 lead into the locker room.

Clemson was forced to punt on the opening possession of the second half, and the Cavaliers found some of their first quarter magic to put together a scoring drive. The Wahoos covered 85 yards in 10 plays and scored on an eight-yard touchdown pass. Midway through the third quarter Clemson led 31-14.

It didn’t take the Tigers long to answer and it was Higgins again in the middle of the action. A 54-yard pass to Higgins put Clemson inside the UVa five, and two plays later Lawrence hit Higgins for an 11-yard touchdown for a 38-14 lead. The touchdown tied Higgins with Nuk Hopkins (27) for the most receiving touchdowns in school history. Lawrence’s four touchdown passes also tied an ACC Championship Game record.

Virginia appeared to be putting together another nice drive, but it stalled near midfield. The Cavs lined up in punt formation but ran a fake punt instead. The throw back to a receiver was well short of the first down and the Tigers took over at the Virginia 49. Six plays later, Lyn-J Dixon scored on a 23-yard burst up the middle and Clemson led 45-14 late in the third quarter.

Virginia once again drove down the field and kicked a 35-yard field goal that made it 45-17 early in the fourth quarter.

Chase Brice entered the game and dropped a 57-yard pass to Frank Ladson that set up a 24-yard field goal by Potter. With 10:45 to play in the game the Tigers led 48-17.

Isaiah Simmons stepped in front a Perkins’ pass on the ensuing possession and returned it 22 yards to the Virginia seven, and Brice rumbled in from seven yards out for a 55-17 lead with 8:13 remaining.

Freshman Chez Mellusi tacked on another Clemson score with 1:26 left from four yards out. Clemson crossed the 600 offensive yards mark on the final drive. The Tigers wrapped the win with an interception by Keith Maguire with 10 seconds left.

Clemson vs UVA Box Score
Get the latest Clemson gear right here!
Comment on this story