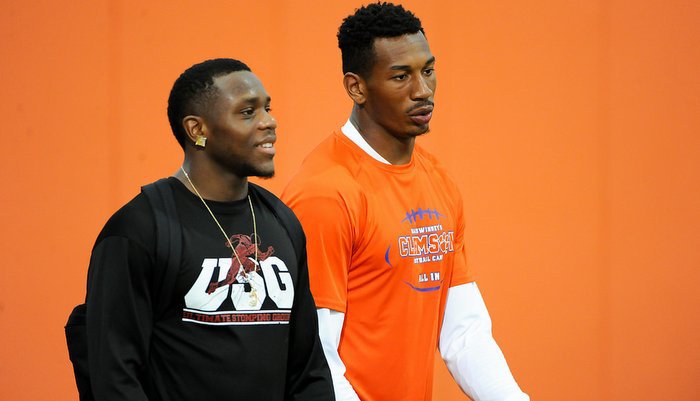 Clemson’s offense returns a bevy of playmakers from last season, including Artavis Scott

Charone Peake
Gr. Wide Receiver
#19 6-2, 205
Moore, SC
View Full Profile , who might be ready to have the type of season Clemson fans have been waiting to see. Finally healthy and looking the best during his time at Clemson, Peake could give the Tigers a true threat on the outside.

CAREER STATS: Peake has 49 receptions for 456 yards and five touchdowns along with two kickoff returns for 22 yards in 972 snaps over 36 games (eight starts) in his career.

2014 RECAP: Had 12 receptions for 129 yards and two touchdowns in 221 snaps over seven games (four starts). Peake looked healthy early and had a 30-yard receiving touchdown at No. 12 Georgia on Aug. 30 (a beautiful throw from Watson), and then followed that up with four receptions for 22 yards and a touchdown against SC State on Sept. 6. In the third game, he had three receptions for 28 yards at No. 1 Florida State on Sept. 20. Peake then missed the next six games with inflammation in his knee, and returned to haul in an 11-yard reception at No. 23 Georgia Tech on Nov. 15. He then had two receptions for 40 yards against No. 24 Oklahoma in the Russell Athletic Bowl on Dec. 29.

Charone talks about the spring and his health here:

2015 EXPECTATIONS: Swinney said during the spring that Peake had been cross-training with Mike Williams at the different receiver positions. One thing that Clemson missed last season was a true downfield threat – Germone Hopper

Germone Hopper
RS Jr. Wide Receiver
#5 5-11, 175
Charlotte, NC
View Full Profile was inconsistent, Scott made plays around the line of scrimmage and Williams doesn’t have Peake’s top-end speed. With a healthy Watson, this could be Peake’s breakout season, even though we’ve said that for a few years.

Peake was timed at 4.2 seconds in the 40-yard dash at a recent workout session, and when we saw him at Swinney’s camp in June he just looked different. In fact, he looked the best I’ve seen a receiver look at Clemson since Nuk Hopkins and Watkins. He has the height, the size and the speed to be dominant.

If he stays healthy, the expectation is that Peake could get in the 40-catch range.

A GOOD SEASON FOR PEAKE WOULD BE… Staying healthy. If he is on the field he will put up the numbers, especially with a healthy Watson. If he can manage to trot out there for all 12 or 13 or more games and provide leadership for the young group, everything else will take care of itself.