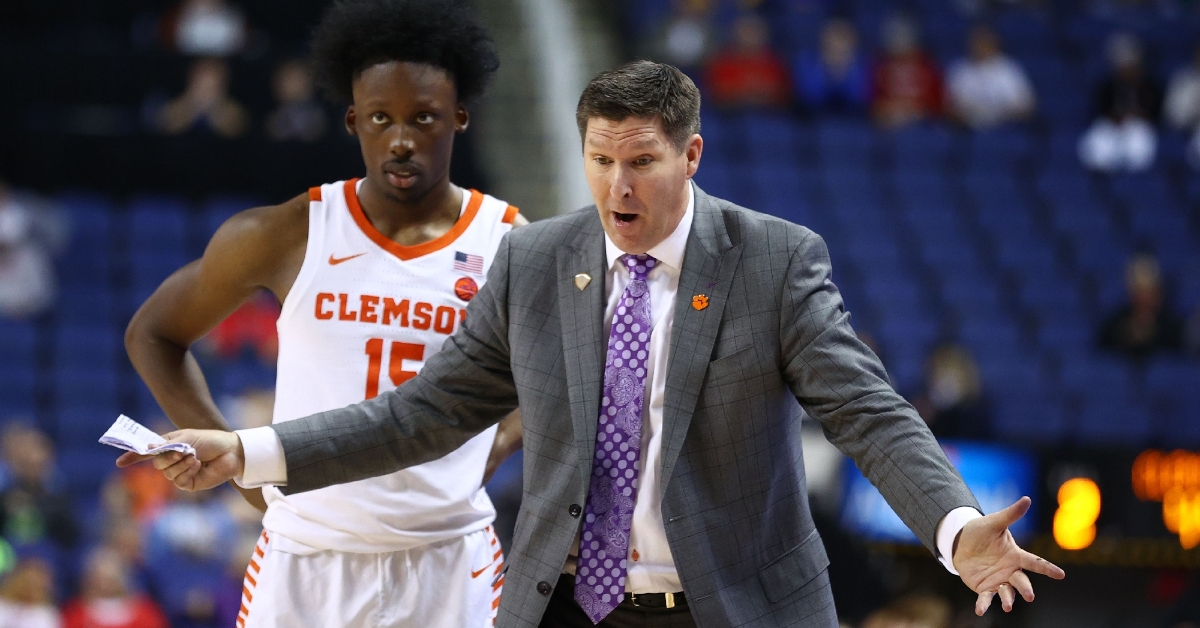 Brad Brownell yells at someone during the win over Miami. (Photo: Jeremy Brevard / USATODAY)

GREENSBORO, N.C. — Outscoring Miami 48-41 in the second half, the Clemson University men's basketball team began ACC Tournament play with a 69-64 victory at Greensboro Coliseum on Wednesday. The contest between the eighth-seeded Tigers and the ninth-seeded Hurricanes kicked off the second round of the tournament.

Clemson (16-15) shot 46.8 percent from the floor and was phenomenal at the free-throw line, as the Tigers made 18-of-19 foul shots, all of which came in the second half. The 94.7-percent mark at the charity stripe marked the best single-game percentage of the season for Clemson. Miami (15-16) finished with a shooting percentage of 38.7 and knocked down 11 3-pointers. The Tigers, who sank seven treys, corralled 32 rebounds, 24 points in the paint and 11 assists. In addition, Clemson benefited from 16 points off the bench.

Al-Amir Dawes led the Tigers with 18 points. The floor general went 4-of-7 from the field and was a perfect 8-of-8 at the free-throw line. Aamir Simms registered his fifth double-double of the season with 14 points and a game-high 10 rebounds. Simms has scored 800 points in his career. John Newman III chipped in 11 points, and Curran Scott and Hunter Tyson tabbed eight points apiece off the bench, with Tyson netting a pair of 3-balls.

Miami isn’t overly complicated. There are basically a lot of sets that are variations of the “Flex offense” that everyone knows and loves. The Tigers switched almost everything throughout the course of the game and forced Miami into a lot of contested 3’s to start out. Miami only shot 2-of-15 in the first half and couldn’t run anything with purpose because the Tigers just seemed to correctly switch on every defensive possession. Clemson is pretty good when they can switch 1-4 and sometimes at all five positions. Communication was really good from the start and the Tigers were alert and active the entire game.

One noticeable difference in this game and other close games during the regular season was the decision to let Dawes run the show when crunch time hit. The freshman showed his growth and ability to run the team even when high-level ball pressure from Chris Lykes came into play. It only helps that Dawes 8-of-8 from the free-throw line to seal the deal. All of which came in high-pressure situations with Clemson’s season on the line. Clemson was able to put guys on the floor who can hit free throws and was able to escape by the skin of their teeth.

The Tigers only took 22 three-pointers this game. Anywhere between 20-25 three-point attempts is their sweet-spot. They are going to shoot a high number because of the style that they play, but the emphasis on getting to the basket was evident. To open both halves of play Clemson got layups at the rim by Newman and Dawes respectively. Not to mention their aggressiveness was rewarded with excellent free throw percentages. Clemson finished the game 18-19 from the line led by Dawes with a calm 8-8 in the closing minutes.

Chris Lykes is Tough to Cover

The lone reason The U was able to stay close. When Clemson basically stalled everything they were doing, Jim Larranaga was able to just give the ball to Lykes and let him work. And man was he fun to watch. The 5’7 (generous) guard was really good off the dribble and able to get loose from three on several occasions, but this post isn’t about him. It’s about the Tigers' ability to make things difficult and adjust on the fly. Brownell decided that he wanted to trap all the ball screens no matter how long and forced Lykes to give up the ball. The fact that the Tigers (mostly Hunter Tyson) was able to do that shows how locked in they actually were. Credit the Tigers for being focused enough to make their changes as the game goes on.

Clemson had a ten-point lead with less than two minutes to play and the Hurricanes cut it down to four with less than a minute to play. The Tigers all got a little too close to the ball and the key to beating pressure is space. Clemson got a little too congested when trying to inbound the ball and it resulted in turnovers at crucial points in the game. This is going to be a point of emphasis going into tomorrow’s game vs. FSU who thrives in situations creating turnovers.

Make no mistake, this was a big win for the young Tigers especially the manner in which they won. They needed to make tough plays at the end of the game and they needed to make free throws to seal the game and they did that too. Again, a huge credit needs to be given to Dawes as I believe this is about the most relied upon he was on the entire year. His continual growth is a lot of fun to watch.