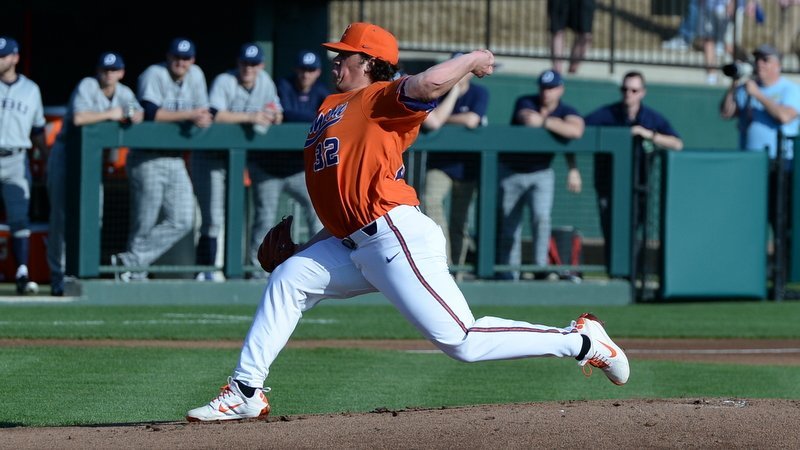 Chris Williams slides in to home with an early run

CLEMSON – Good pitching by Jacob Hennessy and good hitting by Chris Williams were the order of the day Friday.

Clemson pounded out 12 runs and 18 hits, Williams scored four and drove in four, and Hennessy reached career-highs in innings pitched and strikeouts as No. 11 Clemson defeated No. 10 Dallas Baptist 12-1 on a sun-splashed afternoon at Doug Kingsmore Stadium Friday.

Williams went 4-for-4, Patrick Cromwell scored four times and Robert Jolly drove in three runs as all but one Clemson starter had at least one hit. Clemson improves to 5-0 on the season, while Dallas Baptist falls to 3-1.

Hennessy pitched a career-high 6 1/3 innings, giving up just three hits while walking two and striking out a career-high eight. He improves to 1-0 with the win.

"First and foremost, just a very impressive ballgame tonight. Had a great crowd here tonight," head coach Monte Lee said. "A top-10 club in Dallas Baptist, a great atmosphere. I thought our guys couldn't have played a better baseball game than we did. Jacob Hennessy was outstanding. I thought our bullpen was solid. Offensively, we attacked them early. We attacked them right there in the first inning and put up two runs and put up two big innings. We had a big day from Patrick Cromwell again, Chris Williams and Robert Jolly. 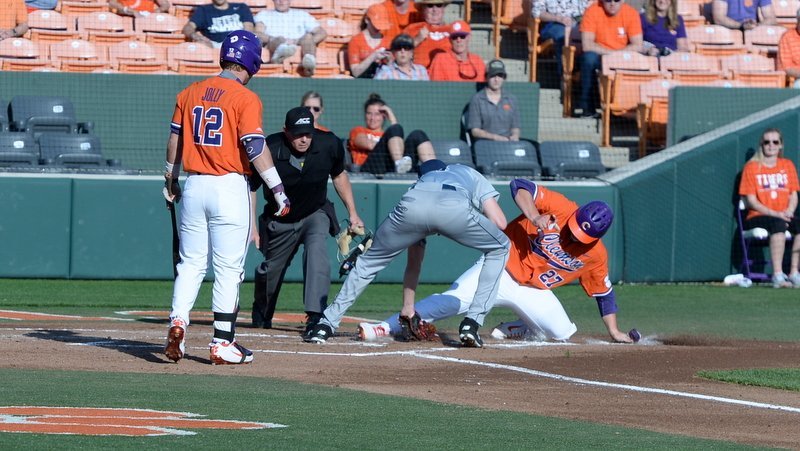 Chris Williams slides in to home with an early run "

Williams said he feels locked in at the plate.

"I would definitely say so. I just feel like anytime I come up to the plate that I can do damage right now," Williams said. "That's the funnest part about baseball. When you're hitting those highs, there's nothing you can't do at the plate. You can hit the ball hard. Right now, I'm just trying to stay balanced and composed, not take it for granted and come out every day and compete."

Lee said that Hennessy deserves the chance to start next Friday's game against arch-rival South Carolina in Columbia, and Hennessy said he also feels confident.

"It did feel a little bit different. I wouldn't say I had jitters on Opening Day. It was just executing pitches a little bit better. The changeup was a lot better this week than last week," Hennessy said. "It was something I really focused on. I took the same approach, the same mindset. It really wasn't any difference in jitters. I just went out and had a weekend under my belt which helps."

The Tigers got the bats going early against Patriot starter MD Johnson. Logan Davidson hit Johnson’s first pitch into right field for a single but was erased on Seth Beer’s double-play ball. Patrick Cromwell singled with two out and he scored on Williams’ double down the left field line. Williams came around to score after two wild pitches and the Tigers led 2-0 early.

Drew Wharton homered to left leading off the second, his first of the season and Clemson career, and the Tigers led 3-0 at the end of two innings.

The Tigers added two more runs in the third. Patrick Cromwell singled with one out and advanced to third on Williams’ double to left. Robert Jolly fell into an early 0-2 hole but stroked a double down the left field line that scored both runners for a 5-0 lead.

Williams and the Tigers continued the onslaught in the fifth. Cromwell walked with one out to bring up Williams. Williams mashed a 1-1 pitch from Johnson deep into the Chapman Grandstands in left, his second long ball of the season, to put Clemson ahead 7-0.

Jolly followed Williams’ homer with another single to left, ending the day for Johnson, who was replaced by Trevor Conn. Conn was greeted by a Wharton single to center with Jolly taking third when the centerfielder bobbled the ball. Byrd singled up the middle to score Jolly for an 8-0 lead. Johnson pitched 4 1/3 innings, allowed 10 hits, eight runs (all earned), while walking one and striking out three.

That brought up Bryce Teodosio, who walked to load the bases for Wilkie. Wilkie struck out looking on a 2-2 pitch and Davidson flew out to center to end the fifth with the Tigers holding an 8-0 lead.

The Tigers scored three more times in the sixth. Cromwell walked with one out, and Williams was plunked in the back to put runners at first and second. Jolly doubled down the left field line again, scoring Cromwell and moving Williams to third. Wharton hit a high fly to center that scored Wharton, and Grayson Byrd laced a single to center that scored Jolly for the 11-0 lead through six.

Hennessy got one out in the seventh before giving up a single to right – the first hit for the Patriots since the third – and was replaced by Carson Spiers. Spiers induced a 4-3 double play to end the threat.

Williams was a part of the continuing carnage in the seventh. Davidson walked with one out and advanced to second on Beer’s single to center. Cromwell struck out for the second out, but Williams lined a single through the left side that scored Davidson for the 12-0 lead.

Wharton said he feels like he has overcome a slow start.

"It wasn't really frustrating because I knew I was squaring some balls up and they just weren't falling," Wharton said. "I knew if I stayed within my approach and worked on what I needed to work on in the cage and stayed up the middle and not pulling off that ball that I'd be fine. I thought I did a great job of that today."

Due to the threat of rain Sunday, the teams will play a doubleheader Saturday. First pitch is at 1 p.m. and the second game will begin 30 minutes after the conclusion of the first game.

Clemson vs. Dallas Baptist game one box
Get the latest Clemson gear right here!
Comment on this story