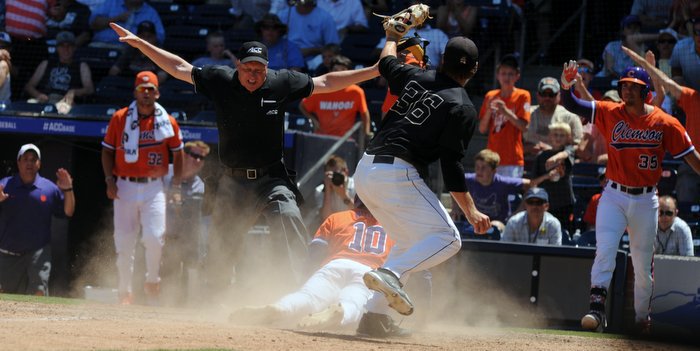 DURHAM, NC – K.J. Bryant scored on a wild pitch with two out in the top of the ninth and Clemson earned its first ACC Championship Game appearance since 2006 with a come-from-behind 5-4 victory over Wake Forest Saturday afternoon at Durham Bulls Athletic Park.

The ACC Championship Game will be played at 10 a.m. Sunday morning in an effort to get the game in ahead of a line of storms.

Clemson erased an early 4-1 deficit to tie the game at 4-4 with three runs in the top of the seventh, and the teams were tied heading into the ninth. Eli White struck out to lead off the inning, but Seth Beer was hit by a pitch for the second time in the game to put a runner on first with one out.

Chris Okey lined a double into the game to put runners in scoring position with one out, and Beer was replaced by Bryant. The Demon Deacons walked Reed Rohlman, but Weston Wilson popped out for the second out. That brought up Chris Williams, who fought back from an early 0-2 hole, but Wake’s Parker Dunshee threw a wild pitch that allowed Bryant to score the game-winner. 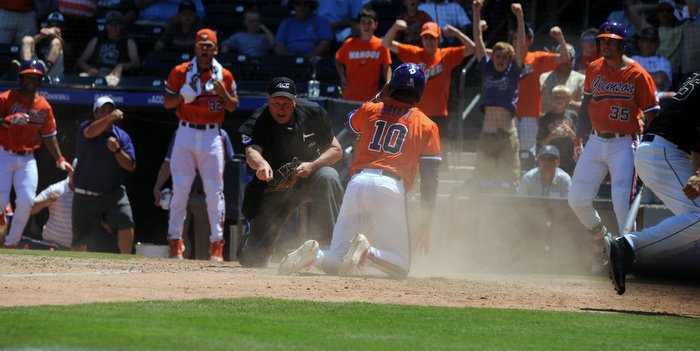 "Just very proud of my ballclub. It was a gutsy win for us, come-from-behind win, which we've done time and time again, so our guys didn't panic. Our guys didn't press. We just stayed the course, which is what we've done all year long, and we found a way to get it done."

Clemson elected to walk Will Craig to begin the second inning, and Wake Forest made them pay. Craig advanced to third on a single to center by Gavin Sheets and scored on a ground out to third to put the Deacons up 1-0.

Wake Forest starter Drew Loepprich baffled Clemson through the first three innings, but Weston Wilson hit a ball hard to center that found green grass with one in the fourth and Mike Triller finally made the Deacons pay with a two-out double off the left field wall to tie the game at 1-1.

It didn’t take Wake Forest long to reclaim the lead, however.

Craig led off the fourth with a single and advanced to second on a single by Sheets. A sac bunt put runners on second third with just one out, and Ben Breazeale rocketed a two-run double to centerfield. Johnny Aiello followed that up with a single to left to plate another run and put the Deacons pack on top 4-1.

Clemson starter Alex Eubanks was chased in the fourth inning after pitching 4.1 innings and giving up four runs on six hits and a walk, while striking out five.

Meanwhile, Wake starter Drew Loepprich held the Tigers at bay through six innings. Loepprich threw 100 pitches and gave up just the one run before being replaced by Donnie Sellers to start the seventh.

Enter Triller, one of the heroes in the win over Virginia. Triller greeted Sellers with another home run – his second of the tourney and third of the year – over the wall in left to make it 4-2. Head coach Monte Lee replaced first baseman Andrew Cox with pinch-hitter Jordan Greene, and Greene drew a four-pitch walk. That brought up Chase Pinder, who drilled a 2-1 pitch deep to left and off the roof of the restaurant above the left field wall to tie the game at 4-4. The homer was Pinder’s 10th of the season.

Sellers was replaced by Parker Dunshee, who had thrown over 100 pitches just three days prior in the play-in game. Dunshee got a quick strikeout of White, but hit Beer with a pitch and walked Okey to put runners at second and third with one out. Rohlman drove a pitch deep to left for the second out, but Wilson walked to load the bases. However, Williams flew out to end the threat.

Andrews got the first two outs in the bottom of the seventh but was chased after a two-out walk to Craig. He was replaced by Pat Krall, who induced a groundout from Gavin Sheets to end the inning. Dunshee got the Tigers 1-2-3 in the top of the eighth.

Krall gave up a leadoff single in the eighth, and a bunt put a runner in scoring position with one out. Krall got out of the jam, however, setting up a fabulous finish.

The Tigers are now firmly in the conversation for a national seed.

"I think we have done a really good job of doing everything that we possibly can to put a resumé together that deserves some recognition," Lee said. "You know, are we a national seed? We can't determine that. But I know this: If you look at our Top-50 wins, Top-100 wins, it's hard I think for anybody to say that Clemson doesn't deserve to be one of the top eight national seeds. We have one of the top eight resumes, I believe, and again, I don't study it to the point of the people on the committee. I'm just trying to win the next game. But I do believe we're in the conversation and you know, we'll see."

Clemson vs Wake Forest Boxscore
Get the latest Clemson gear right here!
Comment on this story