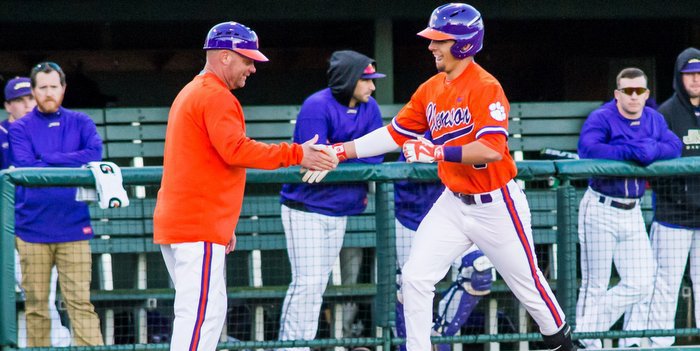 CLEMSON – The Clemson Tigers used their high-powered offense Friday night to take game one of the series against James Madison.

Clemson had just seven hits, but three were long balls - two that Chase Pinder sent deep over the left field one and one by Chris Okey to straightaway center – in defeating James Madison 6-1 Friday night at Doug Kingsmore Stadium.

Clemson’s offensive numbers weren't staggering, but the Tigers took advantage of six walks and wild pitches by Dukes’ starter Aaron Hoover. Charlie Barnes picked up his first win of the season, while Alex Eubanks continued his stellar work in relief.

Clemson improves to 3-1 on the season with its third straight win after a season-opening loss last Friday. Pinder now leads the Tigers in home runs and RBI, and he said he was happy to be contributing now that he's returned from off-season shoulder surgery.

"I had hoped to be there. It's a blessing to be starting off like this, but I want to focus on what's doing best for the team and helping the team win," Pinder said. "I felt confident and I felt like as long as I was healthy and there was no pain from the surgery that I would have a chance to start off like this, but you can't ever predict the future."

Okey started things in the second, sending a 2-2 pitch over the centerfield wall for his first homer of the season to put Clemson on the board first with a 1-0 lead in the second inning. 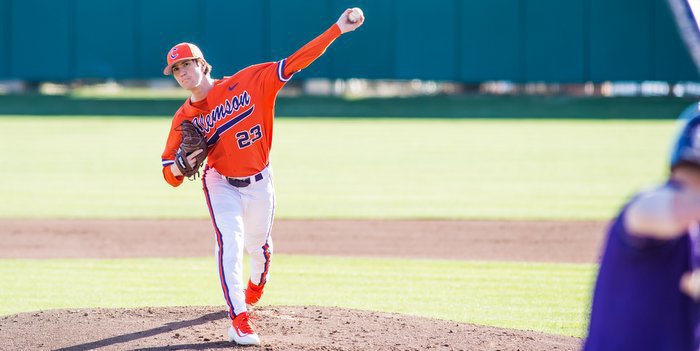 Freshman Seth Beer led off the fourth inning with a double down the right field line and advanced to third on a balk by Hoover and scored on a wild pitch with two outs, extending the Tiger lead to 2-0 over the Dukes.

In the fifth, Pinder led off the inning with a bomb into the Chapman Grandstands – his second homerun of the season – to give the Tigers a little bit of breathing room and a 3-0 lead. It marked the third time in five innings Clemson’s leadoff hitter had an extra-base hit.

Barnes – the sophomore lefty – went five innings without giving up a run, but James Madison’s Chad Carroll laced a single to right center to lead off the sixth and promptly stole second. Ky Parrott followed that up with a single to right field and he took second on a throw home by right fielder K.J. Bryant, giving the Dukes runners at second and third with nobody out. James Madison scored it’s first run on a groundout to shortstop Kyle McPherson, making it a 3-1 Clemson advantage in the sixth inning.

Barnes day was done after the sixth after throwing 93 total pitches – 54 strikes – giving up one run on two hits and three walks while striking out seven in six innings. Barnes (1-0_ picked up the first win of his collegiate career.

The Tigers answered in the bottom half of the sixth as Chris Williams led off the inning with a walk and Weston Wilson followed up with a single. Pinder stepped to the plate two batters later and facing an 0-2 count, drilled one deep into the Chapman Grandstands for his second homerun of the game and a 6-1 Clemson lead through six.

Pinder hit his homer on an 0-2 count.

"The previous pitchers, once they got ahead in the count they threw it in," he said. "I expected a fastball in, and he just left it over the plate a little too much. It happened to go out. I am not necessarily a power threat - I just happened to make contact."

Eubanks pitched three shutout innings, allowing just one hit while striking out five and walking one.

"I thought it was a great game. The pitching staff was outstanding. Through five he hadn't given up anything and the leadoff guy got on, found his way to third base with one and he had a big punchout, but he only surrendered one run," head coach Monte Lee said. "It was a 3-1 game at the time and he only gave up one run. I thought Barnes was outstanding and Eubanks was excellent. Our bats got better as the game went on. We were only to get the leadoff guy on base in three of our innings, but we scored five of our runs in those three innings. One of our big goals is to get the leadoff guy on base. Pinder had a big, big night for us."

Game two will be played Saturday afternoon at 2 p.m. and the series finale will be Sunday at 1 p.m.

Clemson vs James Madison game one box
Get the latest Clemson gear right here!
Comment on this story