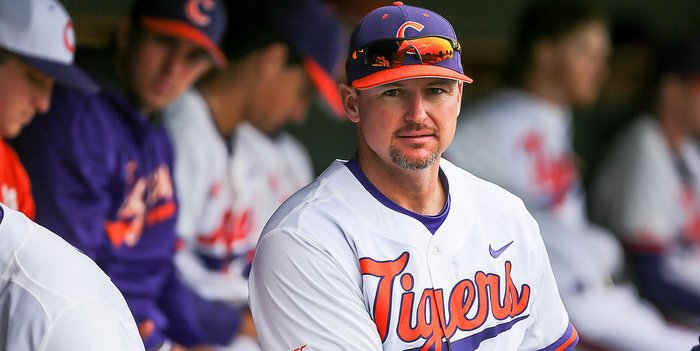 Lee's Tigers are 17-3 heading into the showdown with Miami

CLEMSON – It’s an early-season ACC showdown in Coral Gables this weekend as No. 12 (D1Baseball) Clemson travels to Miami to take on the fourth-ranked Hurricanes.

The Tigers (17-3) have won eight in a row, including an 8-4 victory over Presbyterian at Doug Kingsmore Stadium Tuesday. The Hurricanes are 19-4 after defeating Bethune-Cookman 5-4 Wednesday night at Alex Rodriguez Park at Mark Light Field, the site of this weekend’s series.

The first pitch in Friday’s contest, slated for broadcast on ESPN3, is set for 7 p.m.

“We have looked a little bit at Miami. They have three left handed starters and anytime you face lefties that throw strikes they are difficult to score runs in bunches against,” Clemson head coach Monte Lee said Wednesday. “Especially if you have a bunch of lefties in your lineup. But I think we kind of match up well from a lineup standpoint - we have a number of guys that hit left handed pitching fairly well. Offensively, they have got a couple of guys that can really bang it with (Willie) Abreu and (Zach) Collins.

“Those two guys can really swing it and hit for power. Miami is always a really balanced offensive club. Extremely athletic and have guys that can run and defend. They have some power and pitching-wise they have a couple of bullets in the bullpen that are really good. Miami is one of the best teams in the country right now. I think they are ranked as high as number six in one poll and they beat a good Louisville club last weekend two out of three. We know how good they are and we know we have a heck of a test coming up this weekend. I am excited to see how we respond to that challenge and get down there and just go out and do what we've been doing all year - just stay loose and compete and have fun in the moment and see where the chips fall at the end of the series.”

Lee said the Tigers will have to play fundamentally sound.

The Tigers have won eight consecutive games because they’ve taken advantage of other team’s mistakes, but Lee said Clemson will have to make its own breaks against the talented Hurricanes.

“Our guys have gotten the message that every game and every team is important. When you face a team like Miami they aren't going to make a lot of mistakes. We've been able to win a lot of games because teams have made a lot of mistakes against us,” he said. “They've walked more than we have and we've thrown a lot of strikes. We limit the baserunners against us because we pound the strike zone. They aren't going to walk us. They don't have pitchers that are going to walk six or eight guys in a game. We have to go out there and hit and we have to hit our way on base and we have to do a better job of situational hitting. If you get a runner to third base with less than two out against Miami, you had better score that run because you may not get many of those opportunities because every run you score could be huge. We have to keep doing what we're doing.”

• The Hurricanes defeated Bethune-Cookman at home 5-4 on Wednesday. They are hitting .290 and have a 3.29 ERA and .979 fielding percentage.

• Clemson has outscored its opposition in every inning this season.

• Seth Beer has nine homers in 20 games and is among the top 10 in Tiger history in homers by a freshman.