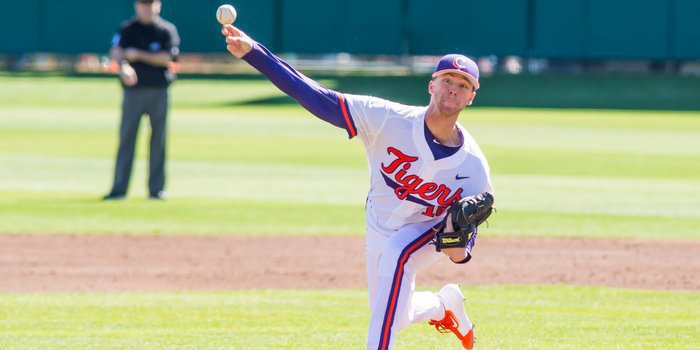 Redshirt freshman Alex Eubanks made his first career start Sunday against No. 18 South Carolina, picking up the win in a 4-1 Clemson victory in front of a Doug Kingsmore Stadium-record crowd of 6,525 on a sun-splashed March afternoon.

Eubanks, out of Moore (SC) Byrnes, wasn’t announced to start until late Saturday. Jake Higginbotham had made each of Clemson’s first two Sunday starts, but Eubanks got the call Sunday and was outstanding, picking up the win with 7 2/3 innings pitched, giving up just one run, one walk and striking out eight. He threw 108 pitches, 75 for strikes.

Clemson (8-2) has won the season series from South Carolina (10-2) in back-to-back years for the first time since 2003, when head coach Monte Lee was a first-year assistant at South Carolina.

Chase Pinder had two hits and drove in a run and Andrew Cox – starting at first base in place of the slumping Chris Williams – drove in two runs.

"What a great game today by our team. We won against a very, very good South Carolina Gamecock team," Lee said. "I think they've got a very, very good ball club. We are very fortunate to win today. It all started on the mound for us. Alex Eubanks did an excellent job. The bottom of our order - a lot of times you can tell the pulse of the ball club by the balance of the lineup and how much production you get at the bottom half of the order. I thought between Robert Jolly, Adam Renwick and Andrew Cox - those three guys did an outstanding job of finding ways to manufacture runs and score some runs for us against Taylor Widener who was very, very good. We played good defensively."

South Carolina head coach Chad Holbrook gave all the credit to Clemson and said the Tigers will be better than people think. 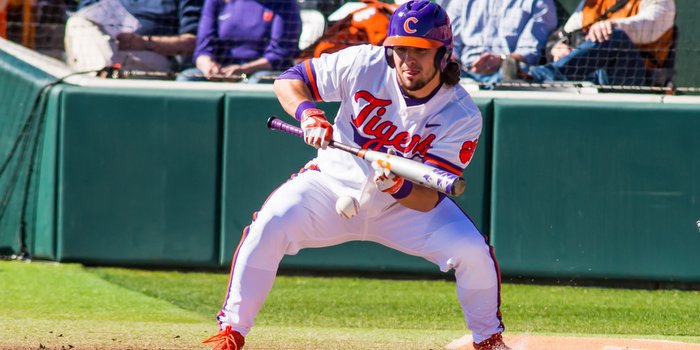 "You've got to congratulate Clemson. They outperformed us.They out pitched us," Holbrooks said. "One run in the last 18 innings or so. I think we have a better offensive team than what we showed the last 18 innings, but you have to give Clemson's pitchers credit. They kind of manhandled us a little bit the last 18 innings. That was disappointing from my end. We will have to regroup and get back to work.

Eubanks did his best to hold the Gamecocks while the Tigers tried to find success against South Carolina starter Taylor Widener. The Tigers got a scare in the top of the second when right fielder and freshman sensation Seth Beer collided with center fielder Chase Pinder on a fly ball. Beer was forced to leave the game to get stitches in his mouth and he was replaced in the cleanup spot by K.J. Bryant.

The Tigers managed a lone single through the game’s first two innings, but broke through in the bottom of the third. Adam Renwick was hit by a pitch to begin the frame and Andrew Cox bunted Renwick into scoring position. Pinder laced a single to left – scoring Renwick – and took second on the throw to the plate. Reed Rohlman promptly lined a run-scoring doubel into left-center for a 2-0 Clemson lead.

The Gamecocks got a run back in the top of the fourth after Dom Thompson-Williams led off the inning with a double. He moved to third on a grounder by J.T. Tolbert and scored the Gamecocks’ first run of the day on a sacrifice fly to center by Gene Cone.

It didn’t take the Tigers long to answer and chase Widener in the process. Okey walked on a 3-2 pitch to lead off the bottom of the fourth, and designated hitter Robert Jolly executed a perfect hit-and-run to the left side to put runners at first and second. At that point, Widener was done for the day and he was replaced by Reed Scott.

Renwick dropped a bunt down the first base line to advance both runners, and both runners scored when Cox lined a single to center for a 4-1 Clemson lead. Pinder singled to left to put runners on first and second, and Scott was replaced by lefty Josh Reagan. Reagan got Rohlman to fly to left and White struck out to end the inning.

Closer Alex Bostic replaced Eubanks with two outs in the eighth, and recorded the last four outs to pick up his first save of the season.

Lee said he appreciates the win because he hails from South Carolina.

However, he wouldn't take any credit for the win or the turnaround from Friday night's loss.

"My guys did it. I didn't do anything. I sat back and watched a group of players compete between the lines, have fun and do it together," he said. "I was so impressed with the way we bounced back. South Carolina whipped us really good on Friday night and for us to respond the way we did on Saturday taught me a lot about our team in my first year here. Still learning about my team, it taught me a lot, showed me a lot about our team. Then today, we played a really good baseball game against a really good team. South Carolina, you have to give them credit, they've got a really good ball club and they're going to win a lot of games this year."

Clemson returns to action Wednesday afternoon, hosting Winthrop at Doug Kingsmore with a 4 p.m. first pitch. It will be the last home game for the Tigers until March 18th – they begin ACC play on the road at Wake Forest next weekend.