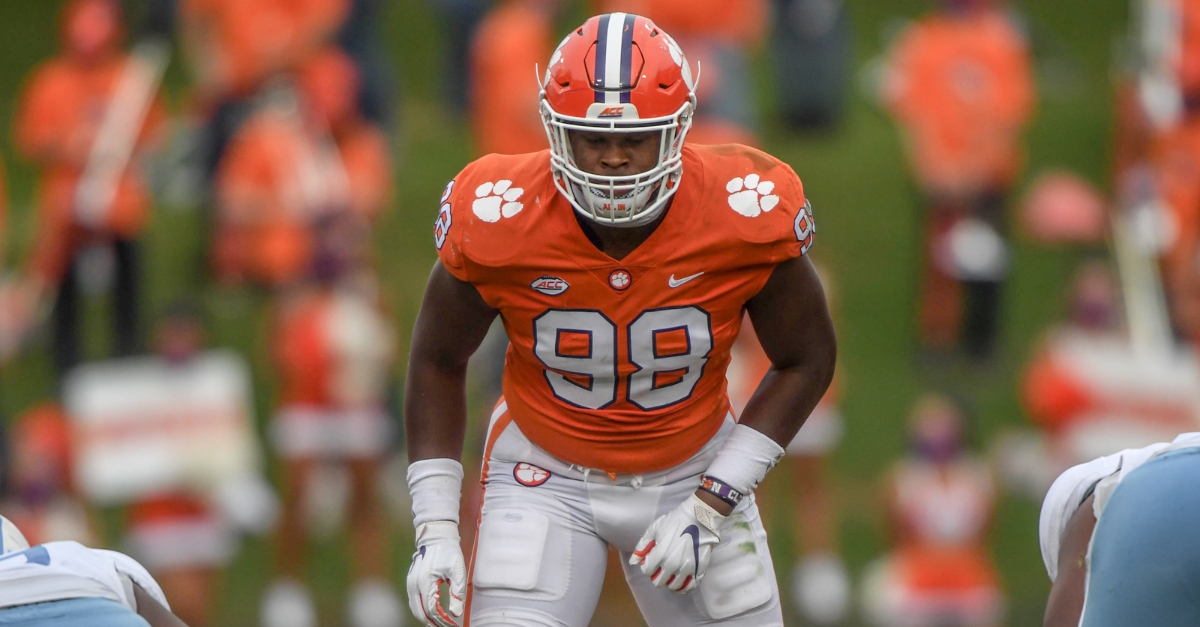 Myles Murphy stares down the quarterback for The Citadel.

Clemson hosted The Citadel in their first home game of 2020 and came out red hot. The Citadel was short-handed after several key players opted out of their abbreviated fall season, but the Tigers’ first half performance was impressive nonetheless. The Tigers took home a 49-0 victory. Below are some key statistics and the storylines they represent.

The Tigers were essentially perfect in the first half, scoring touchdowns on their first six possessions. Trevor Lawrence and Travis Etienne sliced through a helpless Bulldog defense. Young defenders Bryan Bresee and Myles Murphy bullied The Citadel’s offensive line. Backup QB DJ Uiagalelei, who became a Clemson fan after watching QB Tajh Boyd throw touchdowns to WR Sammy Watkins, entered in the second quarter and looked a lot like Boyd as he busted into the end zone twice on QB power runs.

At halftime, The Citadel head coach Brent Thompson passed on Coach Swinney’s offer to move to a running clock. Instead of looking for mercy, his Bulldogs rallied and outgained the Tigers in the second half. Clemson third-string QB Taisun Phommachanh went just 1/5 while the running game slowed behind the second team offensive line. The Tigers were held scoreless for the entire half. Clemson may have some depth to build to fortify their outstanding starting lineup. Fortunately, building depth throughout the season is one of Coach Swinney’s strong suits.

The media’s September Heisman narrative is already written, and unlike years past this one heavily favors a Clemson Tiger. It goes like this: After losing for the first time in his collegiate career (vs. LSU), Trevor Lawrence is on a mission. He’s playing nearly perfect after helping to organize players and the save the season.

Meanwhile, his top competitors – Spencer Rattler and Justin Fields – have played a grand total of one game, and that game was a pay-per-view contest against Missouri State. Trevor Lawrence has already amassed 519 passing yards, 4 passing TDs, and 3 rushing TDs. With his hot start and opportunity to play more games than players from other Power 5 conferences, he is the favorite to become Clemson’s first Heisman winner.

Travis Etienne has the most career rushing TDs (57) in ACC history, but topping Montee Ball’s record for rushing TDs by a running back (77) may now be out of reach. Etienne had two chances to punch it in from inside the 5-yardline but was held out of the end zone on Saturday. So far this season, Clemson has found more success running the QB at the goal line. As a result, Trevor Lawrence and DJ Uiagalelei have collected 3 and 2 rushing TDs, respectively, to Etienne’s 1.

The first team offensive line has generally been impressive, but they haven’t bullied opponents in short-yardage situations and that’s cost Etienne. He has looked strong and explosive though and is still primed for a big year and a chance to challenge CJ Spiller as the greatest running back in school history.

Last week, it was the Braden Galloway who emerged as the major pass catching threat alongside veteran WR Amari Rodgers. This week, one of the talented young receivers, Frank Ladson, flashed his speed and big play potential with a 54-yard TD reception. Could he provide a dangerous deep threat for the passing game that is replacing Tee Higgins and Justyn Ross? His combination of speed (sub-4.5 40-yard dash) and height (6’3”) makes his upside especially exciting. Look for him to build on this performance.

In their first game of the season against UAB, the Hurricanes rushing attack and defense looked solid, but their passing game left much to be desired. This weekend at Louisville, QB D'Eriq King showed he isn’t just a runner by throwing for 324 yards and 3 TDs. Perhaps it is as much a commentary on Louisville’s defense as Miami’s offense, but the Hurricanes showed their upside with all the talent they’ve recruited to Coral Gables.

Miami RB Cam’Ron Harris ran for precisely 134 yards (10.3 YPC) in each of the ‘Canes first two contests and has already popped off TD runs of 66 and 75 yards. TE Brevin Jordan had 7 receptions for 120 yards and a TD against Louisville and looks like one of the top TEs in the country.

Assuming the Hurricanes take care of business against the struggling Florida State Seminoles, they’ll come to Death Valley on October 10th 3-0 and ranked in the top 15. The Tigers have won their last two contests against the Hurricanes by a combined score of 96-3, but it nevertheless should make for the most exciting home game of the season.