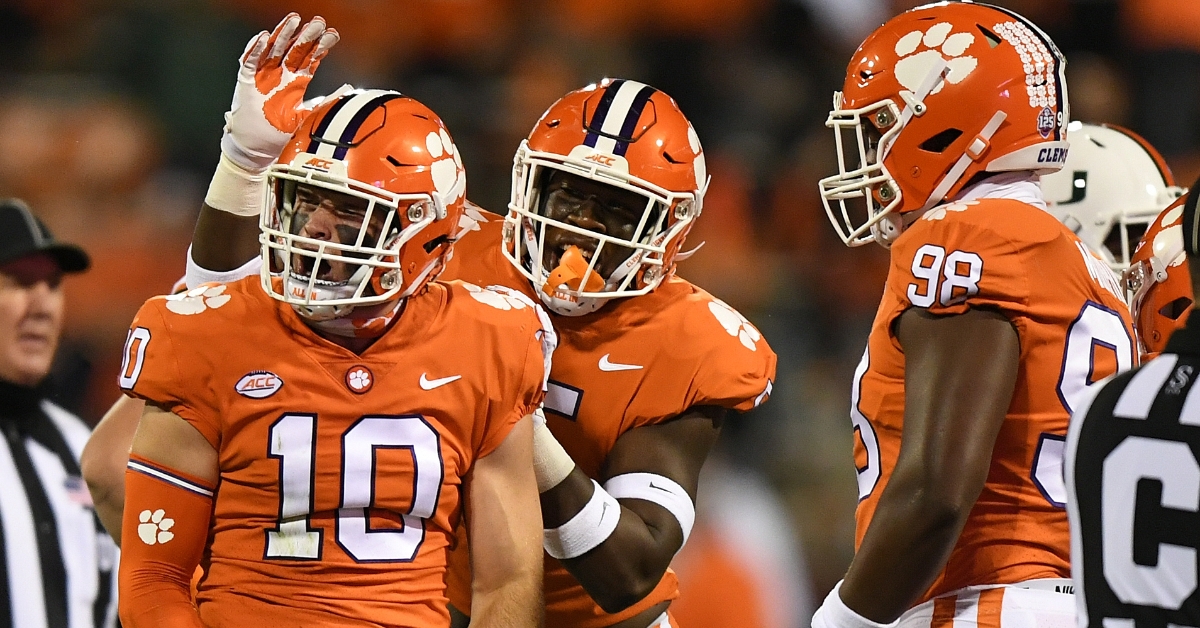 Baylon Spector made several big plays in the win over Miami (ACC photo).

The Miami Hurricanes and rainfall from Hurricane Delta both hit Clemson on Saturday night, but neither was as strong as expected. Clemson’s 42-17 victory over Miami was even worse than the score indicates.

On a night where No. 2 Alabama struggled with Ole Miss, No. 3 Florida lost to Texas A&M, and No. 4 Georgia trailed Tennessee at halftime, the Tigers tightened their stranglehold on the No. 1 ranking. As always, I delve into several statistics from the game and the broader storylines they point toward.

Trevor Lawrence was superb once again. He now has 10 passing TDs and four rushing TDs without an interception (though he did lose a fumble against Miami). One of his prime competitors for the Heisman Trophy, Miami QB D’Eriq King, may well have been knocked out of contention. He was just 12/28 with no TDs and two INTs in his first game against a quality Power 5 opponent. Additionally, Sam Ehlinger’s Longhorns and Kyle Trask’s Gators both suffered losses this week. Before you know it, Travis Etienne will provide Lawrence his main competition in the Heisman race.

Miami briefly seized momentum after returning a blocked FG for a touchdown to close the first half. With a 72-yard touchdown run in the third quarter, Travis Etienne gave Clemson an 18-point lead and swung the momentum back in the Tigers’ favor. Clemson would never surrender that momentum as they went on to win by 25 points.

Clemson fans have been treated to watching elite skill position talent like CJ Spiller and Sammy Watkins in the past. Travis Etienne has undoubtedly earned the right to be talked about in that class of Clemson athletes. His surprising decision to return for his senior year allowed him to further refine his game. He led Clemson with eight receptions against Miami, and is second on the team with 17 for the season. He is on pace to shatter the career-high in receptions (37) he set last season.

Clemson cornerbacks made life difficult on Miami’s receiving corps. Andrew Booth had an excellent deflection on a deep pass. Sheridan Jones and Derion Kendrick had great interceptions. Mario Goodrich looked sharp as well. Clemson has had their share of lockdown cornerbacks, but the depth of this group is unique.

Safety play seemed improved too. Lannden Zanders, who made a few mistakes against Virginia, picked up four tackles. Sophomore safety Jalyn Phillips also picked up four tackles as he rose to the occasion in his first opportunity to play critical snaps on defense. Nolan Turner continues to play well too! If the secondary is consistently this good, Clemson’s defense will be very difficult for anybody to score against.

Harris entered this game averaging over eight yards per carry (YPC). He was held to 0.4 YPC. Tyler Davis’s return from injury boosted Clemson’s D-line significantly, and it looked absolutely elite on Saturday.

Baylon Spector is a fourth-year player (Rs. Jr.), but a first-year starter. He is making a big impact with the opportunity as he leads the team in tackles (25) and sacks (2.5) on the season. He doesn’t catch your attention like RB Travis Etienne or DE Myles Murphy, but Spector was a huge part of the defensive performance against Miami, and has become a tremendous contributor for Coach Venables’ defense.

Miami’s biggest success of the night was blocking three field goals. Clemson lined up for a long field goal to close out the first half that would have given them a 21-point stranglehold on the game. It was blocked and returned for a TD as time in the half ran out. It pulled Miami to within 11 and gave them momentum to start the second half. It was the second blocked field goal of the game, and a third would come in the second half. Miami’s defensive line was getting good penetration. It’s something that will need to get sorted out so Clemson can take advantage of the weapon that BT Potter has become at kicker. He entered the game 5/5 on field goals.

The Hurricanes committed four personal foul penalties, two of which were targeting. They finished with 15 penalties, including several offsides. They looked chippy and undisciplined at times. Miami Coach Manny Diaz said “we are very disappointed with the way we presented ourselves tonight.”

After No. 3 Florida lost at Kyle Field, the SEC’s chances of getting two teams in the playoff dipped dramatically. Georgia plays at Alabama this coming Saturday. The loser isn’t eliminated, but may need to win seven straight games including an SEC Championship rematch. The winner on Saturday would need to enter the SEC Championship Game 10-0 to suffer a loss and still be a shoo-in for the playoff.

Florida’s loss also helped lift Notre Dame to No. 4 and UNC to No. 5 in the AP Poll. It’s the first time the ACC has ever had three teams ranked in the AP top five. Could two ACC teams make the playoff? Notre Dame plays Clemson in the regular season, giving them the same arduous road as Georgia and Alabama. UNC, however, avoids Clemson. If they can survive trips to Miami and Virginia and beat Notre Dame at home they could be in the mix. I wouldn’t bet on them having a perfect regular season though.

With Texas losing to Oklahoma, No. 7 Oklahoma State may be the only playoff contender left from the Big 12. They nearly made the 2011 National Championship, but Alabama claimed the No. 2 slot in the game instead that year.

Is this the year the AAC makes the playoff? If No. 8 Cincinnati, currently 3-0 with a win over Army, can finish 11-0, perhaps they can earn the opportunity. With the return of the Mountain West, No. 15 BYU added games against Boise State and San Diego State. The Cougars 55-3 win over Navy made everyone look twice. They’re 4-0 and could finish 10-0.

Ohio State fans must feel relieved that the playoff field isn’t looking primed to push them out with their truncated schedule. Oregon fans may even become optimistic despite their tiny schedule. No matter how you slice it, the No. 1 seed will be very valuable this year as the No. 4 seed could be considerably weaker than the No. 3 seed.