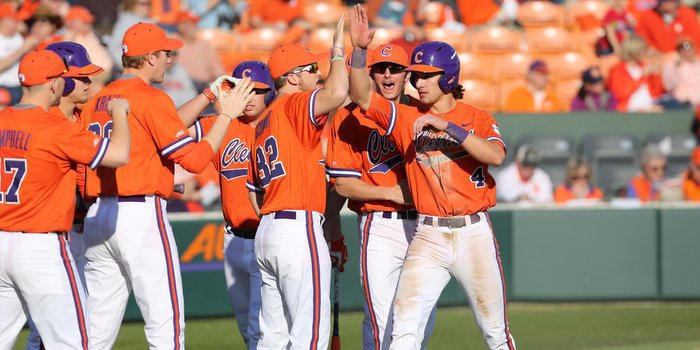 CLEMSON – Different year, different coach and different opponent but it was the same result for Clemson baseball Friday night.

Maine took advantage of a ball lost in the lights to score the go-ahead run in the top of the seventh, taking the luster off the head coaching debut of Monte Lee in a 4-3 season-opening triumph at Doug Kingsmore Stadium.

The Tigers lost the season opener to Eastern Michigan in 2014 and the opener to West Virginia in 2015.

Clemson had a final chance to tie the game – or win it outright – in the ninth. Pinch hitter Robert Jolly reached on an error to start the inning and was replaced by pinch runner Maleeke Gibson. Gibson was bunted to second and Chase Pinder was hit by a pitch to give the Tigers runners at first and second with one out.

Eli White struck out for the second out, but Reed Rohlman walked to load the bases. That brought up All-American catcher Chris Okey, who struck out to end the contest.

The Tigers managed just four hits and committed two errors, but it was the triple in the seventh that couldn’t be ruled an error that made the difference. Weston Wilson had two of the Tigers’ four hits and drove in a run.

"First, I want to give Maine credit for playing an exceptional ballgame today," Lee said. "It wasn’t pretty on either side, but their guys did an outstanding job of competing. I thought their starting pitcher did an excellent job. Their bullpen was very good. They mixed pitches and they competed. They found a way to get it done. You’ve got to give those guys a lot of credit. They out-hit us and they pitched exceptionally well tonight."

The Tigers got on the board in the first inning after Eli White reached on a one-out error. Reed Rohlman promptly drilled the first pitch down the first base line for an RBI double for a 1-0 lead and then scored on a two-out balk for a 2-0 lead.

The Black Bears added two runs in the top of the third against Clemson starter Charlie Barnes, but Barnes settled in until the sixth. The Black Bears put runners at first and third with one out, and Byrnes product Alex Eubanks came on in relief of Barnes. Eubanks induced a bunt strikeout from Lou Della Ferra, but Jonathan Salcedo rifled a single to left to score Kevin Stypulkowski. Eubanks escaped further damage but Maine held a 3-2 lead.

Barnes finished with 5 1/3 innings, giving up three runs, two earned, striking out seven and walking one.

The Tigers got Barnes off the hook in the bottom of the inning. Okey was hit by the first pitch of the inning and Chris Williams reached on an error by the shortstop. Maine starter Justin Courtney was replaced by Connor Johnson, who induced a fly ball from Beer to deep left center. Okey tagged up and advanced to third on the play. Weston Wilson chopped a pitch high off the infield dirt for a single that scored Okey, tying the score at 3-3.

Drew Wharton forced Williams at third for the second out and Renwick hit a soft liner at the shortstop to end the threat.

Clemson’s defense failed Eubanks in the seventh. Jeremy Pena doubled to left over the head of Wharton with one out, but Eubanks struck out Tyler Schwanz for the second out. Brett Chappell promptly hit an easy fly ball to center, but Pinder lost the ball in the twilight, giving Chappell and RBI triple for a 4-3 Bear lead.

Eubanks went 3 2/3 innings, giving up the one run but striking out the final five batters he faced. He struck out seven on the night.

"It was a tough ballgame. It was a tight game. It was a tie ballgame going into the seventh and one of the things that championship-level teams do is they win the last nine outs of the ballgame," Lee said. "We put ourselves in a position to where we could’ve done that. We had some tough luck on a fly ball that Pinder and Beer just lost with two outs to give them the winning run. You give them credit. They kept fighting and finding a way to get guys on base to put pressure on our pitching staff. I thought we pitched exceptionally well. You look at our numbers, we walked one guy and struck out 14. I thought that Charlie Barnes and Alex Eubanks did an outstanding job. In tight ballgames, it’s the little things that will get you beat and we made two errors tonight that cost us two runs. You’ve got to give Maine credit. We’ve got to bounce back and be ready to go tomorrow and try to even the series."

Clemson and Maine tangle in game two of the series Saturday at 2 p.m. The series finale is Sunday at 1 p.m.