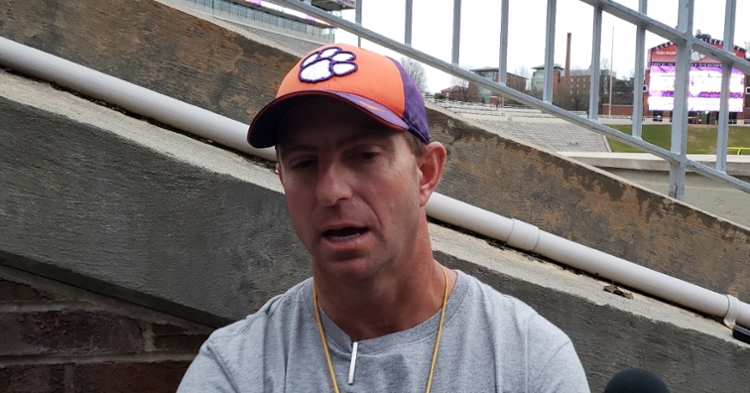 Swinney talks to the media after the scrimmage Wednesday

CLEMSON – The first full scrimmage of the spring is in the books.

Clemson scrimmaged inside Death Valley for close to three hours Wednesday, the ninth practice of the spring and the last before the team leaves for spring break. Head coach Dabo Swinney met with the media and hit the highlights from the scrimmage.

“We have got our first scrimmage behind us and so I guess this is day nine. Awesome. I am really pleased. I was telling the team that this is a way better scrimmage than our first scrimmage last spring. Way better,” Swinney said. “Much more competitive. Really all of the groups are much more competitive. Saw a lot of good things. Still got a lot we have to improve, like penalties and miscues, but I thought they competed. I thought it was very competitive as far as wins and losses with the good on good all the way through.

“Got a lot of different situational work. But it was really, just spot the ball and play. Made sure we got all of the field positions and we got a little short-yardage and goalline there at the end. We did some field and did some punt. Jack Maddox is doing a good job at snapping and we are trying to find someone behind him. A good start. A lot of good things. I am excited to finish it up. I feel really good about where we are. This has been a great nine days.”

*BT Potter has made 34-of-35 field goals during the spring. Dabo said, "He would win the Groza with that. It's amazing the nine days he has had.

*Swinney said he hasn’t heard anything about future plans regarding the coronavirus.

“I am sure there has been all kind of talk about anything and everything,” Swinney said. “We will do whatever they tell us to do. Everybody out there has a plan. But there is no talk about that in the immediate but as we all know anything can change.”

*LeAnthony Williams has had a solid spring.

*Cornell Powell has been the one bright spot. Swinney raved about Powell's nine days.

*Safety Lannden Zanders "continues to show up." Ray Thornton has had an excellent spring. Derion Kendrick had his best day Wednesday. Fred Davis has had his bright spots, getting a lot of reps with injuries at corner. Mike Jones missed a tackle Wednesday but has had a great spring.

*Swinney said having James Skalski on the field, "Is almost not fair. I wish they would take him out. He is such a good football player."

*Linebacker Baylon Spector missed the scrimmage with a shoulder injury but should be back after spring break.

*Swinney said he notices Kevin Swint a lot. KJ Henry had a great day and Xavier Thomas had maybe his best day.

*He said Bryan Bresee, "is coming. I notice him a lot."

*The word for quarterback Trevor Lawrence is "precision."

*With the coronavirus fears, Swinney said he didn’t limit the team on where they could travel but instead cautioned them about staying away from sick people, using common sense, and washing their hands.

*Swinney updated the status of wide receiver Justyn Ross, who walked off the field in pads Wednesday and looked good.