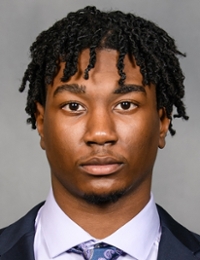 Cornerback
B I O


In High School: Played for Verlon Dorminey at Trinity Christian Academy in Jacksonville, Fla. … recorded 26 tackles, two tackles for loss, an interception and 11 passes defensed as a senior … had seven tackles and five passes broken up in season opener against Godby … played some quarterback as a senior and completed 11-of-19 passes for 172 yards and three touchdowns against Pahokee … recorded 16 carries for 126 yards and a touchdown against Booker T. Washington … averaged 8.3 yards per rush for the season on 29 carries and also added four receptions for 60 yards … in 2018, posted 48 tackles,13 passes broken up and an interception … had an 86-yard interception return for a score in one game and 95-yard kickoff return for a score in another … first-team All-USA Florida selection by USA Today and first-team All-First Coast selection by the Florida Times Union … first-team MaxPreps Junior All-American honoree …  third-team 5A all-state … had 27 tackles as a sophomore to go with a pair of interceptions.


Personal: Committed to Clemson on April 8, 2018 … recruited to Clemson by Jeff Scott and Mike Reed … wore No. 2 in high school … expected to enroll at Clemson in January 2020.