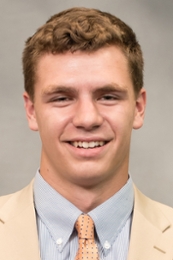 Long Snapper
B I O

2019: Snapped in nine games prior to bowl season … made season debut vs. Charlotte … contributed on special teams vs. Florida State, vs. Boston College and vs. Wofford … recorded first career fumble recovery on a muffed punt at NC State … snapped vs. Wake Forest and at South Carolina.

2018: Snapped in two games … made collegiate debut vs. NC State and also saw action against Louisville.