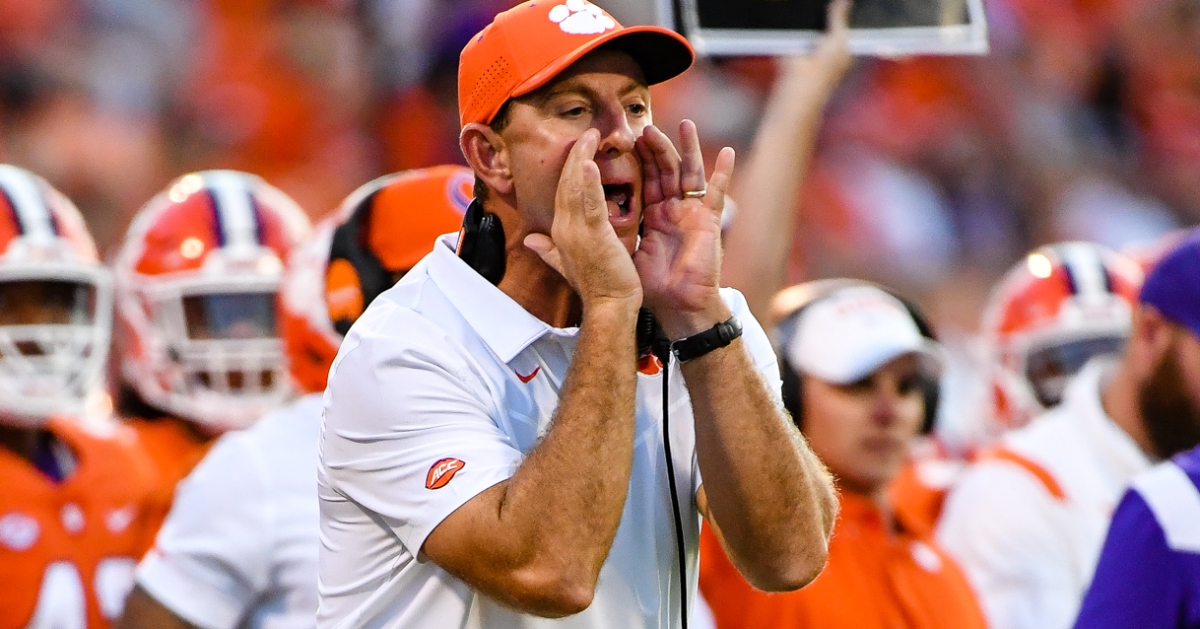 The Clemson Tigers have hauled in top-10 recruiting classes each of the past four years. Conversely, in that time the Pittsburgh Panthers have just one recruiting class inside the top 40. Despite this disparity, Clemson came into Pittsburgh as 3.5-point underdogs.

The Tigers showed just enough offensive spark early on to give fans hope. They would move the ball reasonably well until a critical error derailed the drive. A false start and misthrow doomed their opening drive. An interception on a play where the receiver didn’t fight for the ball ended the next. Dropped passes became contagious as Will Shipley dropped a wide-open pass destined for a TD and then on the following drive wide receivers Beaux Collins, Ajou Ajou, and Justyn Ross all failed to grab catchable balls.

Clemson was without wide receivers Joseph Ngata, Frank Ladson and EJ Williams and didn’t appear to have backups they can win with despite all the great recruiting classes they’ve stacked up. The star-studded defense was sharp early, but late in the game, it appeared fatigued and couldn’t get off the field as Pittsburgh grinded out a painful time-consuming drive to win the game. The quality depth wasn’t there. It was apropos that a reserve, Justin Mascoll, picked up the game-sealing penalty, that allowed the Panthers to kneel the ball and end the game.

How can this be?

For years, Clemson has taken the moral high road in recruiting. They avoid giving high schoolers offers when they’re not certain that the scholarship will be open. This was the right approach and I applaud the coaching staff for taking this stance while competitors were less scrupulous. Things have changed though. It’s disappointing, but with the transfer portal, there is more attrition. Many of us don’t like it and wish it wasn’t the case, but that doesn’t change the situation. Clemson has lost nine players to the portal in 2021. Three were lost during the season (RB Lyn-J Dixon, RB Michel Dukes, and S Joseph Charleston) for which there’s nothing you can do, but for the other six, plans can be made.

DT Nyles Pinckney, DT Jordan Williams, LB Mike Jones, OL Kaleb Boateng, CB LeAnthony Williams, CB Derion Kendrick, and RB Chez Mellusi all departed after the December signing period but prior to the start of the season. Clemson did not take extra freshman with the expectation that some players would transfer out nor did they use the portal to utilize the newly available scholarships. Instead, seven former walk-on players were given scholarships: Drew Swinney, Jack Maddox, Max May, Luke Price, Will Brown, Carson Donnelly, and James/Jacob Edwards (split).

This is not a knock on these players. In fact, I really like what Will Brown has done for the team thus far and would like to see him get more opportunities. Instead, it is to highlight how this conservative roster management strategy erases margin for error. With seven of the 85 scholarships allotted to walk-ons, Clemson is left with 78 scholarship recruits (not counting super seniors). Subtract the three mid-season transfers and you’re down to 75. With some bad injury luck, this season Clemson is well under 70 healthy scholarship recruits on the team.

Unfortunately, this is the new world we live in and if Clemson wants to compete on a level playing field, the staff must forecast for some attrition and account for it with larger recruiting classes or transfer additions. If not, they leave themselves little to no margin for error with injury luck and recruiting evaluation.

All is not despair though. With some changes, Clemson can get themselves back on the mountaintop. Tiger fans can hope to see this philosophical shift begin with a recruiting class of 17 or more student-athletes this December.