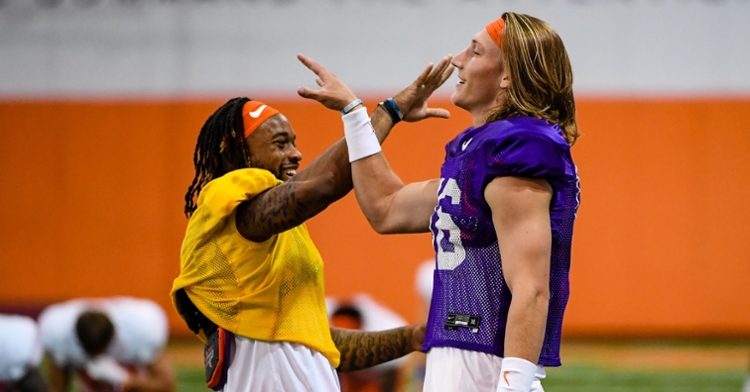 Rodgers (left) hopes to be one of the main targets for Trevor Lawrence (right).

Clemson finished 27th nationally in third-down conversions a year ago, operating at a 44.20% clip (80-for-181), but there were times when it looked as if the offense missed the wiles and wiggles of Hunter Renfrow.

A healthy and free Amari Rodgers could change things this season.

Rogers suffered a torn ACL during a March practice in 2018 and many wondered if he would play at all in 2019. He returned for the second game of the season, against Texas A&M, and finished the season third on the team with 30 catches for 426 yards. He tied running back Travis Etienne for third with four receiving touchdowns.

The numbers didn’t match his 2018 campaign when he had 55 catches for 575 yards and four touchdowns. He also played the entire season with a bulky brace on his knee, but head coach Dabo Swinney said he expected a different Rodgers in 2020, saying the rising senior was, “all gas, no brace.”

“I feel much freer,” Rodgers said. “I feel a lot faster, more explosive, because I feel like the brace was extra weight. So now I just feel lighter and I can play more free and I can play fast every single rep, so it’s definitely an advantage.”

Rodgers made the decision to return for his senior season, his money year, and said seeing his former teammates at the NFL Combine made him want to work even harder.

“I’m working on more hip mobility stuff,” Rodgers said. “Coach Grisham has done a good job of making sure we do that before practice, and I’ve taken initiative to do extra after. So, I’m just trying to get my hip stronger so I can come out of breaks better and be more explosive with the ball in my hands. Also I’m always catching jugs, working on my hands every single day so I can catch every ball that comes my way. And also working on being a leader because I’m a senior now and a lot of guys look up to me. So just working on being a vocal leader and leading by example.”

Offensive coordinator Tony Elliott said he was excited to see what Rodgers and Justyn Ross – the two leaders in the wide receivers room – will do this season.

"Amari is a guy coming off injury and hoping as he continues to get that spring back in his step that we'll have more ways to get him the ball,” Elliott said. “Biggest thing for Amari and Justyn is they're now the leaders of that room. They got a new coach and figure out some different dynamics."