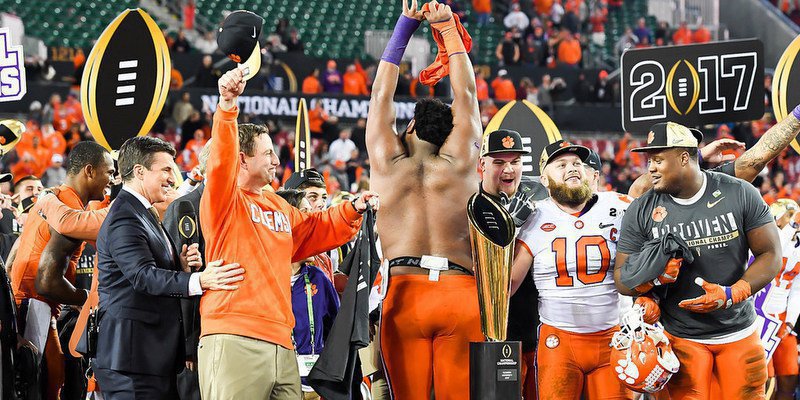 The Tigers have been known to dance

CLEMSON – Club All In was open for business Monday, but the level of entertainment on hand is up for debate.

Head coach Dabo Swinney let the players arrive at the football operations center Monday for practice and let them dress out and get their pads on before announcing that the day’s practice was canceled.

Instead of hitting each other, the players and coaches hit the stage for an impromptu karaoke session that included assistant Miguel Chavis and offensive line coach Robbie Caldwell rapping and Swinney singing a love ballad to his wife, Kathleen.

“Once they all got in their pads, we called an audible and told them to go change and we opened up Club All In. It was the second year in a row we've done that, and it was a blast,” Swinney told TigerNet Tuesday. “We had a ball. It was good to see them have a little fun. That was part of it, but the other part of it was I felt like they really needed another day. This is a long camp. A week longer than last year. And we're really just trying to be smart. I knew this was going to be a tough week and get them back where they needed to be. Yesterday was a lot of fun. We sang some karaoke and everybody had a chance to have a little fun. It was a great, great time. I am the emcee at Club All In and that was a lot of fun.”

Swinney said Club All In is just a small part of trying to keep the players engaged.

“Before the season, we had a big home run derby - coaches versus players - and the coaches won,” he said. “Yesterday was a great day and was one of the best days I've been a part of since I've been at Clemson from a team standpoint. We had a great team meeting. We had what we call Safe Seat and yesterday was a big session of that and to see these guys talk to each other and ask each other questions. I thought we got better yesterday."

Swinney said that while the session wasn’t a competition, there were a few that stood out.

“The best was Allison Waymyers and Donna McCain - our new chef. They stole the show,” he said. “They totally didn't know and I put them on the spot, so they did good. Our seniors had a nice little ending for the grand finale. Our freshmen were kind of like you would expect. There were a lot of gongs in that group. I thought a couple of coaches got up and did a nice job. I'm the emcee of Club All In, so it was a lot of fun.”

Wide receiver Trevion Thompson does know who was the worst.

“They were all pretty good. The worst was Coach Caldwell's rap. The best one was the ladies,” Thompson said. “They did a little song up there, so it was good. A lot of the young guys, they're on the verge of hitting that wall, so having a day where they can just sit back and exhale and let their hair down, it was good. They seemed excited. I always tell them that camp isn't the way it used to be a couple of years ago with all of the rules changes. They've got camp good right now.”

Thompson also liked the fact that Swinney sang “Still the One” to his wife in front of the players.

“Coach Swinney has something towards his wife,” Thompson said. “It's great to see that a man like him loves his wife like that. It's a great example for us and our futures.”

Offensive lineman Pat Godfrey had a great day – Swinney gave him a scholarship earlier in the day – and he said there were several performances that stood out.

“The best performance - Will Brown and Will Swinney did Garth Brooks and I gotta say that I thought they were just playing the song because they were so spot on,” Godfrey said. “The worst performance had to be Amari Rodgers and Tee Higgins. They did Pony and they didn't know the words very well and it got a little bit too risque for my liking. I give them the biggest thumbs down. The worst dancer - Jayson Hopper did some kind of weird dance to I Want to Dance with Somebody”.