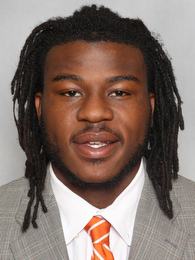 Tight End
B I O
Sophomore who has served as a reserve tight end, but has also played at running back ... has 11 receptions for 113 yards and one touchdown along with 43 yards on six carries in 307 snaps over 18 games (two starts) in his career.

Before Clemson: Rated as the No. 45 athlete in the nation by ESPN ... top-20 player in South Carolina by ESPN and Rivals.com ... No. 59athlete in the nation and No. 16player in South Carolina by 247Sports.com ... No. 26 tight end in the nation by Scout.com ... played in the Shrine Bowl and the Offense-Defense All-American game ... had 37 receptions for 493 yards and five touchdowns along with 112 rushing yards as a senior ... coached by Michael Allen at Nation Ford High School ... recruited by Jeff Scott.