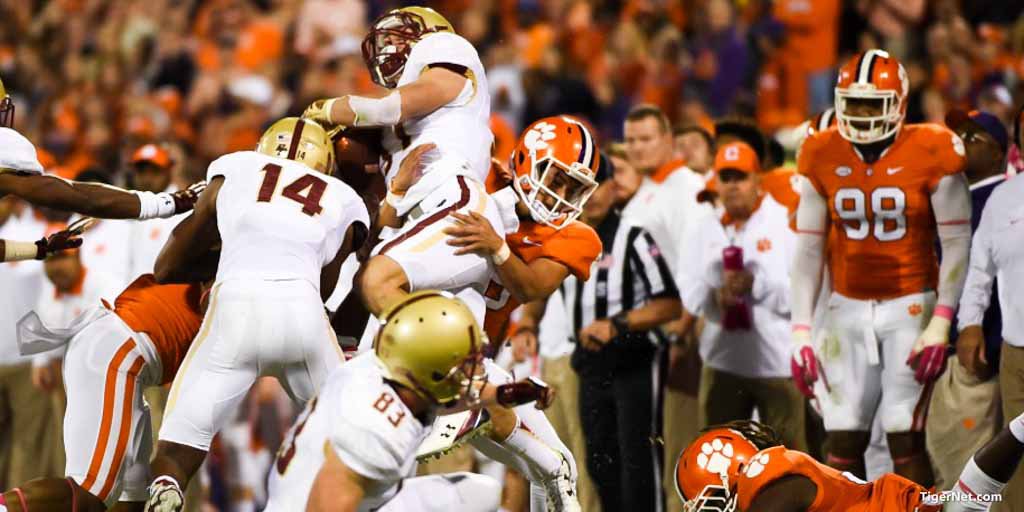 Lakip has been big on special teams this season

FORT LAUDERDALE, FL – Clemson’s 2015 football team has handled adversity all season long, whether it was losing key players in the spring, the loss of Isaiah Battle in mid-summer and the injury to Mike Williams in the season opener.

The team responded each time, but has to get up off the mat again in order to beat Oklahoma in the Orange Bowl Thursday night. It was learned late Tuesday three players have been suspended for Thursday’s Orange Bowl against Oklahoma, and two of those players were expected to play key roles in the College Football Playoff Semifinal.

The freshman Cain emerged as one of Clemson’s top deep threats this season and had 34 receptions for 582 yards and ?ve touchdowns in 310 snaps over 12 games. Cain’s five touchdown receptions are good for second on the team, and he is tops on the team with 17.1 yards per reception average. He had two catches for 12 yards against North Carolina in the ACC Championship Game.

That’s a lot of adversity to overcome, but this group has overcome all season. They lost defensive end Ebenezer Ogundeko in the spring, Lakip was suspended in June, Battle decided to leave for the NFL later in June and starting nickel/safety Korrin Wiggins was lost to a torn ACL in fall camp. The defense also lost eight starters from the nation’s top unit, and there were expectations that the defense would have a major drop off.

Williams went out in the opener against Wofford, but the team bounced through a perfect regular season and won the ACC Championship Game.

"Well, there's always different things within the course of a season that happen on your team that you have to kind of manage throughout the year, whether it's discipline on your team or whatever, just tough," Swinney said a few weeks ago. "And then for us, you lose Mike Williams right out of the gate who's probably the best receiver in this league and certainly one of the top two or three in the country and all of a sudden he's gone first quarter, first game.”

Swinney has proven in the past that no player is bigger than the program, and that he isn’t afraid to make the tough decisions. He even sent running back Mike Bellamy home the night before the ACC Championship Game in 2011.

On this particular bowl trip, with so much on the line and a berth in the national championship game at stake, the score is Adversity 1, Clemson 0. Can the Tigers respond? Will they be “All In” with a coach that doesn’t waffle in how he disciplines players?

The Tigers rolled over Virginia Tech in that championship game in 2011 – Bellamy soon became an afterthought – and the players have always responded to a coach that does things the right way. Every. Single. Time.

Adversity 1, Clemson 0. But if these Tigers are who we think they are (thank you Dennis Green), the scoreboard will show a different result Thursday night. If this team is indeed made of the stuff champions are made of, we will find out in a hurry.