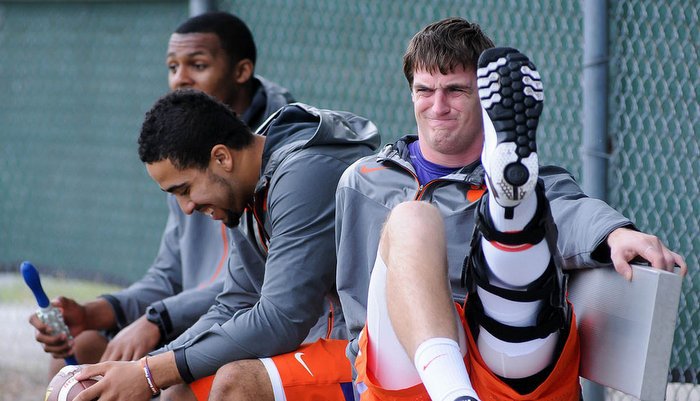 Brandon Ford
Tight End (2008 - 2012)
#80 6-4, 240
Wando, SC
View Full Profile paved the way for tight ends at Clemson with record-breaking careers, but after their departure the production from that unit has essentially fallen off the map.

However, Seckinger and Leggett say the drop off isn’t due to lack of talent or desire. It had more to do with health.

“You look at Sam last year, he had to play a lot at the end of the year, but his leg was still pretty much broken, his shoulder was bothering him and he was still coming back from a torn ACL,” Seckinger told TigerNet recently. “Jordan has had knee issues that are constantly hurting him. Obviously with my injury late in the season, but during camp I partially tore my Achilles. We had guys out there playing, but a lot of times it's guys out there playing hurt. It's all part of the game. Yes, we've been out there, but we've been in pain.”

Seckinger has recovered from his leg injury, Leggett is healthy, and there’s a bevy of talent, and Leggett said the tight end corps is ready to make Clemson known for its tight ends again.

“Our mindset as a position is just to get back on the map because we fell off over the last couple of years due to injuries and quarterbacks and stuff like that,” Legget said. “I just really want our position to go out there and put up some numbers. We have so much depth and so much talent at tight end that I know we can do it. It just a matter of us getting into the season. We're so excited with it being right around the corner.”

A healthy Seckinger said he had seen a difference in Leggett during the offseason and in fall camp.

“I would say an extreme focus. You can tell a difference in his demeanor whether he's on or off the field,” Seckinger said of Leggett. “He's got a lot more focus and is a lot more about his business. Y'all have been out at practice, and Y'all have seen him make plays. He's obviously a different guy this year than he has been. The work he did in the summer has really helped him.”

The expectations for Leggett have been through the roof, but he said he simply needed time to grow up, learn the position and figure out life.

“Going through my freshman and sophomore years I always had a great spring and a good spring game. I would go through the summer good, and then when the season came around I would fall off,” Leggett said. “Plus, it's my junior year, and I can leave after the season, but I'm not looking at that right now. I just have a different mindset because I'm growing older and getting closer to leaving, so I feel like I have to grow up and get it together to build my future.”

Seckinger said he has also seen a change in McCullough, who has battled off the field issues.

Williams will be a star before his time at Clemson is over, according to Leggett.

“Garrett is a stud. Before he leaves he's going to be really good,” Leggett said. “He learns fast. He's almost got the entire playbook down. It's just a matter of technique. He's a stud. He's going to help us out. His four years here are going to be something special.”

“He's large, there's no doubt about it. For his size, he can move,” Seckinger said