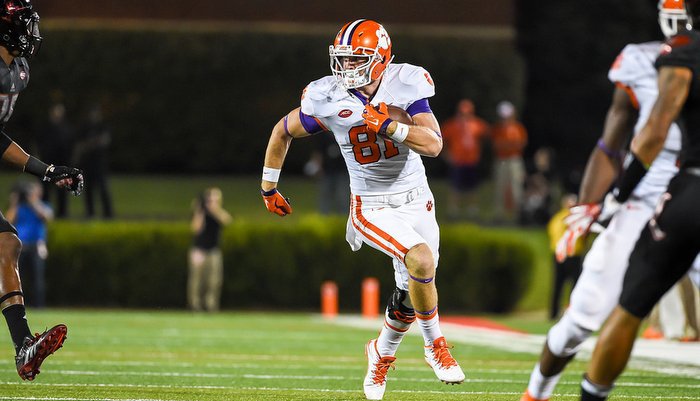 CLEMSON – Stanton Seckinger will run down the hill for the final time as a Clemson football player Saturday, but he knows that he is leaving Clemson’s program in better shape than when he arrived.

The senior tight end out of Isle of Palms (SC) Porter-Gaud arrived at Clemson as a wide receiver, but transitioned to the tight end spot prior to the 2013 season and emerged as a playmaker. Seckinger started 10 games and had 21 receptions for 244 yards and four touchdowns in 394 snaps.

The emergence of Jordan Leggett meant a diminished role in 2014 – he caught nine passes for 122 yards and a touchdown in 12 games – before a knee injury caused a further disruption in his playing time. Seckinger suffered a knee injury in the regular season finale against South Carolina and missed the bowl and time this season as he recovers.

He’s caught two passes for 21 yards this season, but says he has tried to make an impact off the field and hopes his leadership means he leaves the program better than he found it.

“Honestly, that was my goal coming into Clemson. To leave the program a better place than I found it. Obviously, this past year has been very tough for me, but I've had to try and find a way to make an impact,” Seckinger told the media Monday in the WestZone. “Maybe it's not necessarily catching touchdowns out on the field, so I've had to find another way to make an impact and lead this team. So that's been kind of tough to deal with - you kind of have to humble yourself after not being to do what you were originally able to do physically. We've developed some depth and these young guys are really coming along, so the position is better. Hopefully I am leaving it a better place than I found it. “

Seckinger said it’s hard to believe it’s his Senior Day, something he won’t be able to process until it’s over.

“It makes you kind of reflect on your time being here. It's hard to believe. I've been playing football ever since I can remember. It feels like I got to Clemson yesterday,” he said. “It's kind of an unreal moment and it hasn't really hit me, yet. It's not really something I've sat down and thought about. It's gonna be bittersweet. Clemson has done a lot for me and I would like to think I've done just as much for Clemson. It's definitely bittersweet.”

Seckinger will be recognized with the rest of the seniors and will get his chance to run down the hill to the cheers of the crowd, something made even more special by Clemson’s 10-0 record.

“Any time you get to run down the hill it’s special, but it's the cherry on top to run down with the kind off season we are having,” he said. “But running down the hill would be special whether we are 10-0 or 0-10. It's part of Clemson's tradition and that is something that is special regardless of your record. I would rather be on the 10-0 side than on the 0-10 side - that makes it a little sweeter - but it's special regardless.”

Clemson’s tight end group is filled with playmakers, and we asked Seckinger to say the first thing that came to mind on each of them. He had the following responses:

*Jordan Leggett – “Hard worker. Yesterday was Sunday and it’s supposed to be our day off, but he was up here watching film.”

*Garrett Williams – “Stud. I can't imagine doing some of the stuff he's doing as a true freshman.”

*Milan Richard – “When I picture Milan, I see someone who can stretch the field. He's a big dude who can really run.”

He ended with his thoughts on himself.

“Just somebody who wants to leave a place better than he found it, whether that’s being a leader on the field or off the field,” he said. “Someone who loves his teammates, wants what's best for them and works hard.”