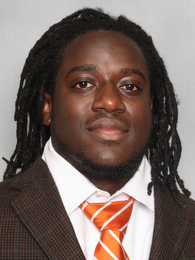 Defensive End
B I O
Talented defensive end who was a backup in 2013, but saw increased playing time in 2014 ... had 64 tackles, 9.5 tackles for loss, five sacks, 14 quarterback pressures, two pass breakups, one caused fumble and two recovered fumbles, including one for a touchdown, in 881 snaps over 47 games (four starts) in his career.

Before Clemson: Defensive end who had 80 tackles, 25 tackles for loss and nine sacks as a senior at First Coast High School ... from a long line of outstanding Tigers from Jacksonville, Fla., a defensive heritage that has included nine-time Pro Bowl player Brian Dawkins ... Florida Times-Union Super 24 member ... Florida Times-Union Preseason Super 11 member ... No. 29 defensive tackle in the nation and No. 47player in Florida by Rivals.com ... No. 73 defensive end in the nation by Scout.com ... No. 105 defensive end in the nation by ESPN ... top-100 player in Florida by SuperPrep ... starter on the basketball team ... coached by Marty Lee at First Coast High School ... recruited by Jeff Scott ... chose Clemson over Florida, Florida State, Notre Dame, North Carolina and South Carolina.