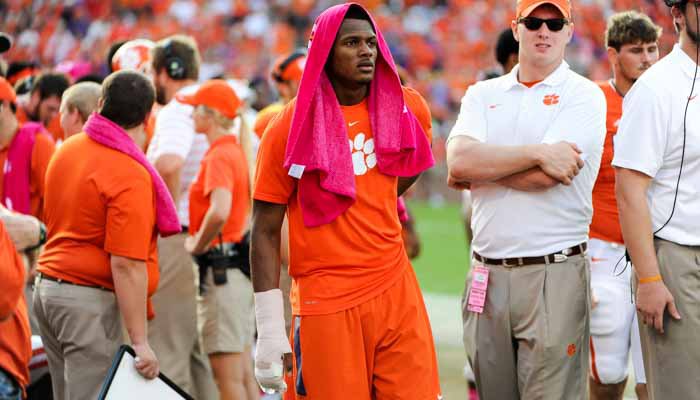 Swinney met with the media to discuss Saturday’s 16-6 win over Syracuse and look ahead to the open date (Clemson’s next game is Nov. 6th at Wake Forest) and he said that he was proud of the win, even though it might not be pretty in the eyes of the fans.

"I'm proud of our guys. Really just another hard-fought, excellent win. I was proud of the fact that we were able to overcome a negative turnover margin,” Swinney said. “That was just a tremendous team win. We put ourselves in some bad spots. To still be able to win was a credit to our defense. The second half of the game was just a dominant performance from a time of possession performance. We had a lot of our backups in the game. We had a lot of excellent effort by a lot of guys. We're 6-2 and I'm proud of the October that we had. The biggest thing this week is to get our players and staff recharged and get a start on Wake Forest. We want to make a run here in November.”

Stoudt threw two interceptions, lost a critical fumble and the downfield passing game was almost non-existent against Syracuse. However, Swinney said he was proud of the way Stoudt played and blamed the interceptions on the offensive line and said that so many throws around the line of scrimmage were simply a part of the game plan. 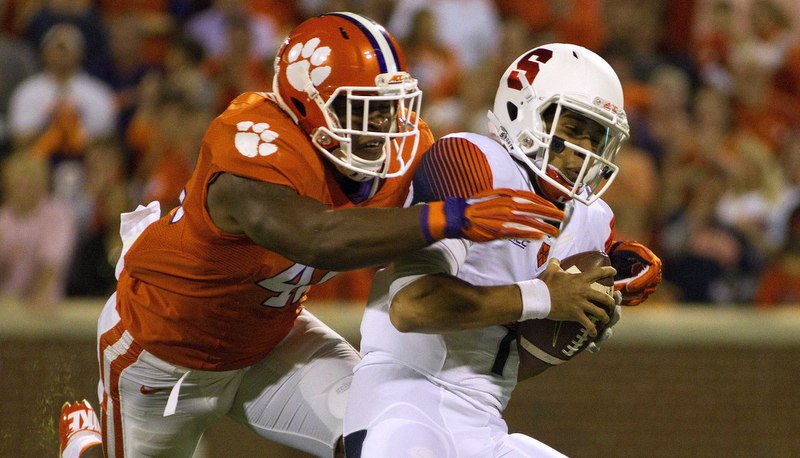 “The two interceptions were on the O-line. Cole got hit both times on the picks,” Swinney said. “I think he has gotten better each week from where he was in the Louisville game. He played better at BC and better the other day. You have to take what's there. If we're throwing down the field all the time, then it's (the sentiment that) the run game stinks. You can't win for losing with some of you guys. All I know is he did an excellent job with what he was seeing. He made a great throw to Mike Williams

Mike Williams
So. Wide Receiver
#7 6-5, 208
Vance, SC
View Full Profile down the sideline, down field. He made an excellent throw on the post route to Mike Williams. He made an unbelievable throw to Seckinger. We missed on a couple where he got hit, but we had a post route open and a one-on-one down field.

“We didn't have a lot there. They weren't going to give us a lot. That's just our running game. If you pay attention to what they're doing defensively, their plan was to see if we could be patient and put things together. We rushed the ball for 180-something yards but really for 200-something. Those are runs to us. I know they go down as passing stats. But it's a part of our run game. He kept it a few times and did a nice job. That's what we were having to do to win the game. Their plan was to try to not give up the big play. We messed it up a few times but did just enough to win the game. We kept the ball in the second half because we were able to run it and execute our system and Cole was a big reason for that."

Watson, who has been out since breaking a bone in his right hand against Louisville, could see some limited practice action this week.

“We'll see on Wednesday when we get back out there,” Swinney said. “We think he will be able to do more this week. They've got a different splint for him this week that will give him more motion."

"Offensively we just didn't finish. We didn't get points. We have to come away with points. We just had some untimely miscues that made it a much closer game than it needed to be. I was proud of Cole, especially in the second half and how he managed the game. He averaged 4.5 yards a carry. Artavis Scott

Artavis Scott
Fr. Wide Receiver
#3 5-11, 190
Oldsmar, FL
View Full Profile is just a young player who has a bright future. He has had an excellent year for us. I'm proud of how Wayne Gallman

Wayne Gallman
RS Fr. Running Back
#9 6-1, 209
Loganville, GA
View Full Profile ran the football and the way he attacked his protection assignments. C.J. ran the ball well. I like what I've seen from him the last couple of weeks. He's just got to be consistent and has to take care of the ball for us. I think he's really doing a good job for us.”

Kalon Davis
RS Sr. Offensive Guard
#67 6-5, 340
Chester, SC
View Full Profile continues to play well for us. He played 82 snaps. (David) Beasley played hurt but did some good things. It was good to get (Tyrone) Crowder in there. He played about 62 plays. That's the most he's played. (Reid) Webster played 83 snaps. He's done well. But our quarterback got hit too much. We've got some fundamental things we need to work on. And again, the turnovers is something we've got to work on. "I like what I saw in the fourth quarter, the confidence and effort I saw in our guys. Ammon was tremendous, too. Bradley punted well. Adam Humphries

Adam Humphries
Sr. Wide Receiver
#13 5-11, 193
Spartanburg, SC
View Full Profile did a great job all night of handling the ball. Good win for us, glad to be 6-2 and we'll see if can't get moving forward.”

C.J. Davidson
RS Jr. Running Back
#32 5-10, 203
Clemson, SC
View Full Profile (Shoulder bruise). Got a lot of guys that we'll try to get well and healed up and hopefully when we go up to Wake, we'll have a few more pieces to the puzzle."

The open date and the future

"We're just trying to beat Wake Forest. The open date comes at a good time for us. We have a chance to get healthy and get some guys back. We always do some things fundamentally in our open date and things with regard to looking at our future opponents. But it's really about trying to go up to Winston-Salem and beat Wake Forest. We just want to get to 7-2."

On watching Louisville vs FSU Thursday

"Oh, we'll watch it, of course. I won't get too emotional or too caught up on what happens. Should be a heck of a game. All we can focus on is what we control. That's really it. The outcome of that game doesn't have anything to do with us at Wake or what happens down the stretch. We had an opportunity to be in a different situation but we didn't do what we needed to do, so we lost that control. I don't sit around and worry about that stuff. I just want to get to 7-2."

“He has come through. Tough start for him for sure. He has shown a lot of mental toughness. He has had some big kicks. The kick at Boston was big because he hadn't been back out on the road since the FSU game. That did a lot for his confidence. He has been great here at home, hitting 13 out of 14. He's been a huge weapon for us. We only needed one touchdown to win the game, but those three field goals sure were nice."

Did CJ Davison not come back in because of the fumble or his shoulder?

“He could have come back in. Tony felt like Wayne was playing well in the second half, so we just rode him. We were disappointed with C.J. there in the first half, but C.J. has done a lot of good things. I like how he's running the ball but he's got to be consistent in all areas. Wayne did an excellent job running hard. I'm really pleased with his protection and how he attacked those assignments. We wanted to get Tyshon in there, but it wasn't the right situation. I like where he is right now. With another two weeks of practice to get game ready, that will be a benefit for him."

Parity in the ACC?

"To me it's been that way for a long time. To be honest with you I'd rather win 16-6 than 50-35 any day. I like it a lot better when the other team can't score. Sometimes your offense might be there, sometimes not, but when you're consistent on defense it makes things easier in a lot of areas. I'm proud of our team for doing what it needs to do to get to 6-2. Every game is a hard fought game. Anybody can beat anybody in this league. We had 11 teams with winning records in the conference last year."