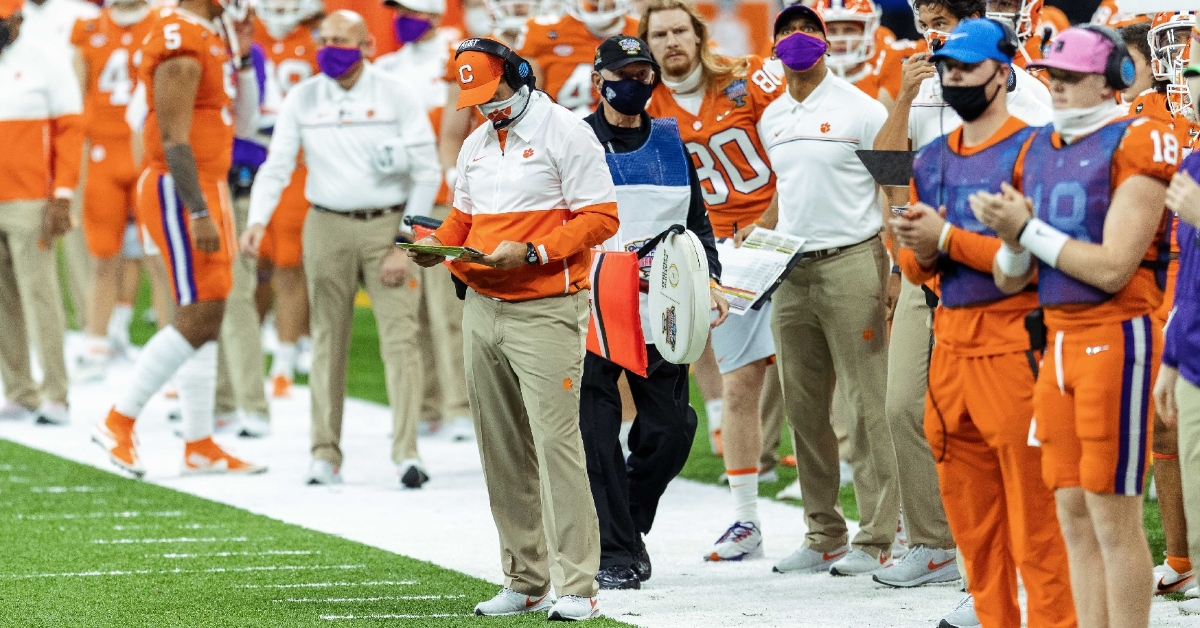 *Clemson finished its 2020 campaign at 10-2, its 10th consecutive 10-win season, the third-longest streak in FBS history. It was only Clemson’s second season in the last six years in which it lost multiple games (12-2 in 2017).

*Quarterback Trevor Lawrence completed 33-of-48 passes for 400 yards with two touchdown passes. It was the third 400-yard passing performance in a bowl game in Clemson history, joining Deshaun Watson’s efforts against Alabama to conclude the 2015 and 2016 seasons.

*Lawrence concluded his junior season 34-2 (.944) for his career as a starter, the third-best winning percentage by a starting quarterback with at least 30 career starts since Division I split in 1978, trailing only Miami’s Ken Dorsey (.950) and USC’s Matt Leinart (.949), according to ESPN Stats & Info.

*Lawrence opened the scoring with a two-yard touchdown run on the game’s opening possession. It was his eighth rushing touchdown of the season and the 18th of his career. His 18 career rushing touchdowns are fifth-most by a Clemson quarterback in the modern era.

*Etienne joined Keenan Reynolds (88), Montee Ball (77), Travis Prentice (73), Ricky Williams (72) and Kenneth Dixon (72) as the only FBS players ever to rush for 70 career touchdowns according to official NCAA records.

*Etienne concluded his senior season having scored a touchdown of any kind in 46 of his 55 career games, adding to his FBS record for most career games scoring a touchdown.

*Powell’s eight receptions were the second-most in a game in his career, trailing only his 11-catch performance against Boston College earlier this season.

*The 100-yard receiving game was Powell’s team-high fourth of the season.

*Powell scored on a 10-yard touchdown pass from Lawrence in the third quarter.

*Powell added a second touchdown on a 26-yard pass from Lawrence in the fourth quarter, extending his single-season career high with his seventh touchdown catch of the year.

*Clemson finished with 444 yards to reach 400 yards of offense in each of the first 12 games of a season for the second time in school history (2018).

*Spector added a sack in the second quarter, pushing his single-season career high total to 4.5. Including two sacks in the 2019 Fiesta Bowl, 3.0 of Spector’s 6.5 career sacks have come against Ohio State.

*Linebacker Mike Jones Jr. recorded his second interception of the season and of his career on Ohio State’s first possession of the second half.

*Punter Will Spiers played his 56th career game to tie for ninth-most in school history. It was his 56th career start, one shy of Mitch Hyatt's school record (57 from 2015-18).

*Spiers averaged 47.4 yards on five punts. He finishes the season with a 43.98-yard average, the second-best single-season mark in school history.

*Clemson and Ohio State met in postseason play for the fifth time, moving the Buckeyes past Alabama and LSU (four each) as Clemson's most common bowl opponent.

*Clemson played a fourth AP Top 10 opponent in a single season for the third time in school history (four each in 2013 and 2015). Clemson also played a fourth matchup of two AP Top 10 teams in a single season for the first time in school history; Clemson played three Top-10 matchups each in 2013, 2015 and 2016.

*Clemson’s 2020 seniors finished their career with a 51-5 record over the last four years. The 51 wins by the class tie the 2016 and 2019 Alabama seniors for fifth-most in FBS history.

*The defeat moves Clemson to 25-22 all-time in bowl contests, one win shy of tying Nebraska for 10th-most bowl wins in FBS history.

*Clemson dropped to 58-2 when scoring first since 2015. Both defeats have come in the Mercedes-Benz Superdome in postseason play.