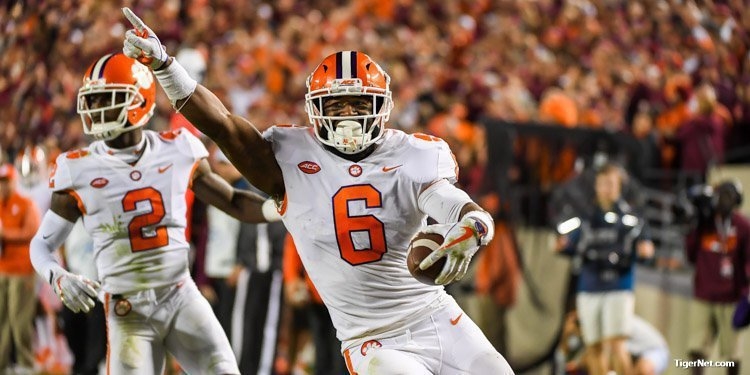 O'Daniel has had projections as high as the third round.

Clemson, S.C.— Multiple members of the 2017 Clemson football team could have their name called at the NFL Draft in Dallas, Texas this week. The 83rd annual selection of former college players will take place April 26-28 at AT&T Stadium.

The first round will be held Thursday evening beginning at 8 p.m. eastern with rounds two and three on Friday night. Rounds 4-7 will be on Saturday afternoon. The draft will be televised by ESPN, the NFL Network and Fox.

None of the Clemson players are projected to go in the first round, but linebacker Dorian O’Daniel and wide receiver Deon Cain could be selected on Friday evening. O‘Daniel was an All-American this past year and Cain led Clemson in receiving yards and touchdowns on the way to making All-ACC.

Strong safety Van Smith, receiver Ray-Ray McCloud, offensive linemen Taylor Hearn and Tyrone Crowder, and graduate cornerback Ryan Carter all could be chosen on Saturday according to media that cover the NFL draft.

Clemson has had at least four players selected in the NFL draft each of the last nine years, something only Alabama, LSU and Oklahoma can also claim. That is the longest streak of at least four selections by an ACC team since Florida State had a 10-year run from 1992-2001.

Since Dabo Swinney became the full-time head coach of the Clemson program, Clemson has had 48 players selected, sixth most in the nation. That includes 15 selections the last two years, the most in a two-year period for Clemson since 1983-84 when the Tigers had 16.

Last year, Clemson’s six selections ranked tied for eighth in the nation. Michigan had the most with 11, while Alabama had 10. Miami (FL) had nine, while LSU, Florida and Utah had eight apiece. Ohio State had seven, while Clemson, North Carolina and Tennessee had six apiece. This year there will be 256 players selected over the seven rounds.

Clemson has had at least one first-round selection each of the last five years. A year ago Mike Williams and Deshaun Watson were both selected within the top 12 picks. It marked the first time since the AFL and NFL merger in 1967 that the same school produced a quarterback and a wide receiver within the first 12 picks. It marked the second time in three years, but just the fourth time overall that Clemson had two first-round selections.

A year ago Clemson had 39 players on an NFL roster, including seven who were rookies that helped Clemson to the 2016 National Championship. Of the 39, 34 played in at least one game and 25 of the 34 started at least one game. The 34 players who got into at least one game combined to earn over $43 million last year.

Report: Trevor Lawrence to be limited at rookie minicamp
Post your comments!